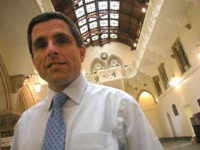 The contract to run the Centre was awarded to the University's School of Education and Lifelong Learning by the National Assembly in May 2006. Siôn will start in his new post on the 30th of October.

The Centre will work with other providers in the mid-Wales region, including Ceredigion and Powys County Councils, and the Further Education Colleges of Ceredigion, Meirion Dwyfor and Powys to develop and enhance the provision of language classes for businesses and adults wishing to learn Welsh.

Following his appointment Siôn said:
“This is an excellent opportunity to transform the way Welsh is used in mid Wales. I am looking forward to leading a team of people who will be marketing Welsh for Adults courses to a new audience, and providing courses of a high standard which will ensure more people learn the language successfully and use it with confidence.”

Professor Aled Jones, Pro Vice-Chancellor with  particular responsibility for Welsh language provision at the University of Wales, Aberystwyth has welcomed the appointment.
“This is an excellent appointment. Siôn's experience of working across Wales and on international projects will be very valuable for the new Regional Language Centre. Its establishment represents a major step forward for the promotion of Welsh for Adults and an opportunity to build on years of dedicated service which the University has given in the field.”

“The awarding of the contract to the University and the School of Education and Lifelong Learning is an indication of the National Assembly’s confidence in our commitment to the teaching of Welsh at all levels. The University is committed to increasing the number of students who study through the medium of Welsh and this development represents an important step towards its achievement,” he added.

During his time with Tearfund Siôn led a team of volunteers across Wales who worked on increasing the support from churches and individuals towards humanitarian projects in some of the world’s poorest countries. He led a team of volunteers from Wales and England to Rwanda in Uganda in April 2005, and over the years has had the opportunity to visit Tearfund partner projects in other countries in southern and western Africa. During a sabbatical period in June 2005 he visited India to complete a research project on a HIV and AIDS programme in the workplace for the Standard Chartered Bank.

Before working for Tearfund, Siôn was the Director of CYD (Cymdeithas y Dysgwyr – Learners Society) which was then part of the Department of Welsh at the University of Wales, Aberystwyth. During this time he gained experience of running a programme to bring native Welsh speakers and those who are learning the language together to assist them to become fluent speakers. He now welcomes this tremendous opportunity to enable many more people in mid-Wales to become fluent in the Welsh language, in all adult age-groups, irrespective of their present level of proficiency.