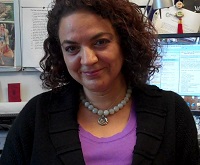 Dr Ayla Göl from the Department of International Politics at Aberystwyth University will be co-chairing a Westminster Debate held by The Centre for Turkey Studies (CEFTUS) titled ‘Turkey, the Kurds and the Crisis in the Middle East’.

The debate is being hosted by Labour MP for Stalybridge and Hyde, Jonathan Reynolds.

The debate is based on the existing situation between Syria and Turkey as part of the wider current geo-political landscape in the Middle East. Turkey remains adamant in requesting safe havens in Syria for refugees and a strategy to oust al-Assad, as well as designating the Kurdish PYD as a terrorist organisation.

Syrian officials oppose Turkey’s requests and the US and Germany is considering sending arms to Kurdish fighters. Recent developments in the border town of Kobane tangle the developments.

Keynote speakers Bill Park of Kings College and Gareth Winrow will analyse the relations among the regional actors and discuss the future of the crisis in the Middle East.

Those wishing to attend the event should click ‘register’ on CEFTUS website or alternatively RSVP to centreforturkey@gmail.com