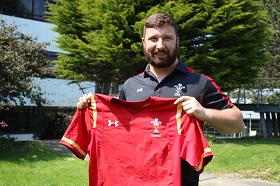 Owen, who is in his third year studying Physical Geography, and captains the University’s Rugby Union first team, played for the Wales Students in their match against France Students on Wednesday 4 May.  The match, which was held at Caerphilly Centre of Sporting Excellence at Ystrad Mynach, saw the Welsh team victorious, winning 24-17.

Owen, who played in a tighthead prop position, said:  “It was a great experience playing my first international match for Wales Students. I am grateful for the support shown by my department and the University, and would like to think my experience shows that it is possible to study and also play top standard sport if you’re willing to commit fully.  I will be continuing to train with the squad next year and am hoping to achieve more caps.”

The Wales Students is a key part of the Welsh Rugby Union pathway for identifying and developing talent.  A number of players have progressed through Wales Students to represent Wales internationally.

Graduating at the University’s graduation ceremonies this July, Owen intends to stay on at Aberystwyth University to complete a Masters.