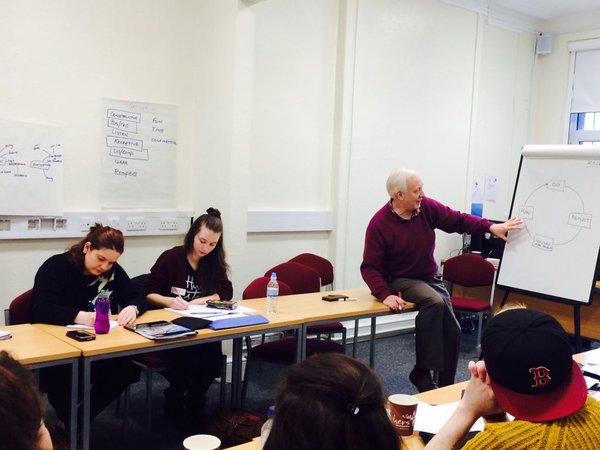 Modern language degree students go into schools to work with pupils as part of a Welsh Government scheme.

A scheme aimed at tackling the ‘serious decline’ in the take up of modern foreign languages by school pupils in Wales has substantially increased the number of project schools it will be working with into its second year, from 28 to 44.

Initially a pilot, the major intervention is aimed at increasing the take up and attainment of modern languages at secondary schools across the country. It is funded by the Welsh Government as part of its five-year Global Futures strategy aimed at supporting modern languages in schools in Wales.

Under the scheme, modern foreign language (MFL) undergraduates at Aberystwyth, Bangor,  Cardiff and Aberystwyth universities are recruited and trained as student mentors and are partnered with pupils in local schools.

Each undergraduate undergoes a rigorous assessment process and training with specialists in student mentoring. They are partnered with committed schools in the areas surrounding their university in close collaboration with regional educational consortia.

Each partner school is assigned student mentors who will be matched with Key Stage 3 mentees and classes (Years 8 and 9). Student mentors undertake weekly mentoring sessions for their pupil mentees in small groups across next academic semester.

The new scheme builds on existing work taking place between universities and schools in Wales, including the Routes into Languages Cymru programme, through which universities engage in outreach programmes with pupils in local primary and secondary schools.

In its first year, with 32 university students mentoring 254 pupils, the project has had a clear impact not only on the pupils who have been mentored but on whole cohorts within the project schools. Over half of the schools reported increased numbers for GCSE classes, including one school where a modern language GCSE class is now due to run for the first time in three years.

As well as creating sustainable links between HE MFL departments and secondary schools, the scheme offers employability experiences and opportunities to MFL undergraduates.

Professor Claire Gorrara, Academic Lead for the project, said: “Although Wales is a bilingual nation, the number of school students taking at least one modern language at GCSE has declined by 44% from 2002 to 2015. This, in the context of a growing body of evidence showing that a decline in modern foreign language uptake in secondary schools curtails educational, training and career opportunities for young people from Wales.

“In the wake of the vote in the UK to leave the European Union, the importance of promoting modern languages is particularly urgent. Now more than ever, young people need to develop linguistic and intercultural skills that will help them develop professionally and personally, and compete on a global stage.”