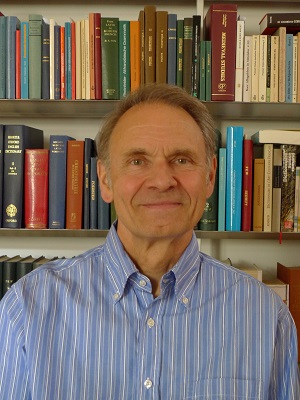 The inaugural Memorial Lecture to honour the achievements of Professor David Trotter will be held by Aberystwyth University’s Department of Modern Languages on Friday 14 October 2016.

The Department of Modern Languages has established the annual memorial lecture series to acknowledge not only Professor Trotter’s major contribution to the study of medieval French language and Anglo-Norman lexicography but also his role as a lecturer in French and Head of Department for over twenty years.

David Trotter was a leading international authority on French language and lexicography and was the chief editor of the Anglo-Norman Dictionary that is based at Aberystwyth, receiving honours such as the Prix Honoré Chavée.

As well as receiving many acclamations during his career, he was also an inspiring leader and a loyal colleague of Aberystwyth University. David Trotter enjoyed working collaboratively and had a wide international network of academic friendships.

He will always be remembered by his colleagues for his breadth of knowledge, his intellectual curiosity and his wonderfully witty turn of phrase (in multiple languages).

Former Director of the DEAF research institute (Etymological Dictionary of Old French) and personal friend of the family, Professor Frankwalt Möhren, Heidelberg University, will be giving the inaugural lecture.

This lecture will give insights into the work of lexicographers like David Trotter. On the basis of examples like ‘pudding’, ‘flat earth’ and ‘Jesus Christ’s Profession’, Profesor Möhren will demonstrate the general interest of lexicographers’ work and its relevance as part of the humanities.

Professor Frankwalt Möhren will be giving his talk ‘The easy yoke of strict science’ in the Seddon Room of the Old College at 6pm on Friday October 14th; There will be a drinks reception from 5.15pm onwards and all are welcome to attend.