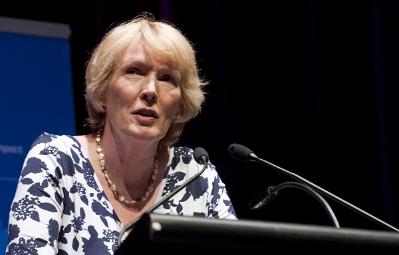 The EH Carr Memorial Lecture is now widely regarded as the most distinguished lecture series in the field of international politics.

Professor Margaret MacMillan will deliver the 33rd Carr Lecture, the title of which is ‘Sometimes It Matters Who Is In Power’.

Professor MacMillan is Warden of St Anthony’s College, Oxford.  She is the renowned and prize-winning author of several international bestsellers, and many people will have become familiar with her voice on Radio 4 in 2014 on programmes marking the centenary of the outbreak of the Great War.

Speaking of the upcoming lecture, Professor Ken Booth from the Department of International Politics stated: “We are tremendously lucky to be able to welcome Margaret to Aberystwyth: she must be one of the busiest people in the country, with her scholarly and media work, managerial responsibilities, and public engagement.

"Her life is surrounded by history, not only professionally but personally – she is a great granddaughter of David Lloyd George, and aunt to the historian Dan Snow. Her books – the latest being History’s People: Personalities and the Past - blend the big picture and accounts of single individuals.  She is a consummate storyteller, offering fascinating details alongside narratives of major themes. We are guaranteed an outstanding lecture on what is surely one of the most pertinent issues in the UK and indeed the world today: the roles of individuals in history.”

In a separate development, Professor Richard Beardsworth has been appointed to the prestigious E. H. Carr Chair in International Politics which has previously been held by Professor Ken Booth and Professor Ian Clark.

He has published major books on Nietzsche, Derrida and, most recently, on cosmopolitanism and international relations theory.

Professor Beardsworth has been the University's Director of Ethics since 2015 and was appointed Head of the Department of International Politics in August 2016. His current research interests include the study of state responsibility in an era of complex, multiple global challenges.