Study of radicalism in Wales launched 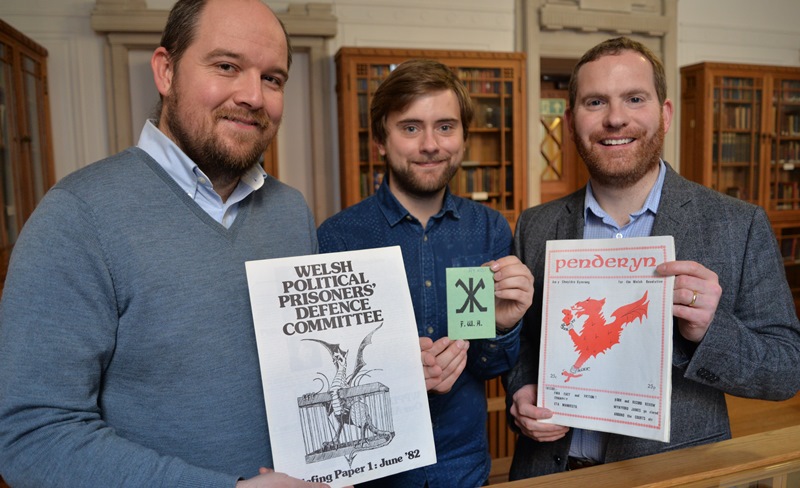 The changing faces of radicalism in Wales will be examined as part of a new research project at Aberystwyth University.

The aim is to look at civil participation on society’s fringes and analyse why certain forms of citizen engagement are viewed as being more socially acceptable than others.

Hosted by the University’s Department of Geography and Earth Sciences and funded by the ESRC Doctoral Training Centre for Wales, the study covers the 30 years from 1962 to 1992, widely seen as a tumultuous period in modern Welsh history.

A unique feature of the project will be the close collaboration between the University and the Welsh Political Archive at the National Library of Wales.

It is hoped the findings will also form part of an exhibition in 2019 to coincide with the 50th anniversary of the investiture of the Prince of Wales.

Dr Rhys Dafydd Jones from Department of Geography and Earth Sciences, said; “The scholarship grapples with two topical issues: the emphasis of the value of civil participation on the one hand and the fear over radicalism on the other. More often than not, civic engagement such as volunteering is seen as societal “good”. But the question we will be grappling with is what is the difference between actions that are perceived to be “good” and those that are more radical and therefore seen as being “bad”. This is a particularly pertinent question when looking at the groups in question and placed in the context of today’s Wales.”

“While many of their actions were viewed as being radical or extreme at the time, there is, however, a need to understand this radicalism within a broader context, with many of their demands such as political devolution and greater rights for the Welsh language, by today a reality and part of mainstream Welsh society and political discourse,” he added.

Aberystwyth University graduate and former Ysgol y Preseli pupil Rhodri Evans will undertake the study as part of his PhD.

“This topic has always fascinated me and is one which I feel very passionate about”, said Rhodri.

“The issue of civil participation with fringe groups is a subject that has often been neglected in Welsh historiography and I hope my work will help shine a light on activities that were perceived to be militant at the time, but placed in the context of today, were pivotal in shaping the Wales that we now know,” he added.

Rob Phillips of the Welsh Political Archive at the National Library of Wales, said; “We’re delighted to have been able to collaborate with Aberystwyth University on this project and believe that the research can lead to innovative and engaging ways of bringing the treasure trove of information stored in our archives to life.

“We hope that the results of the research will lead to both physical and digital exhibitions in 2019, which in many respects is apt as it will mark the 50th anniversary of the investiture of the Prince of Wales at Caernarfon, which proved to be a focal point for many of the activities that will be studied during the course of the PhD.”