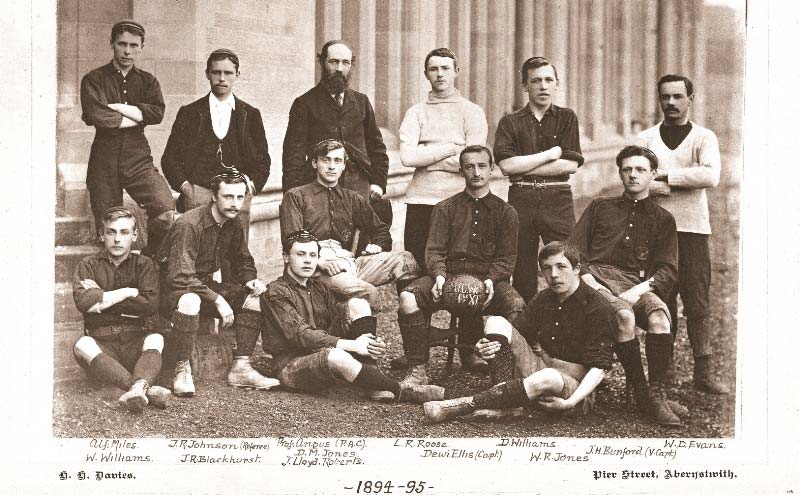 Photograph of the Aberystwyth University football team 1894-1895. Leigh Roose is third from the right, standing in the back row.

The name of a Welsh footballing legend is to be added to a special plaque commemorating Aberystwyth University students who were killed in the First World War.

Leigh Richmond Roose became known as one of the greatest goalkeepers of his day but in 1916, he was killed during fierce fighting on the Somme.

Despite his death, Roose’s name did not appear on the memorial plaque to fallen students at Aberystwyth’s Old College.

Now members of Aberystwyth University Old Students’ Association have come together to honour the memory of Roose and ensure the goalkeeper is added to the remembrance roll of honour.

Louise Perkins, Alumni Manager for the Development & Alumni Relations Team at Aberystwyth University said: “For a century, the name of Leigh Richmond Roose has been missing from the war memorial erected by the Old Students’ Association to honour those from the University who had fallen in the Great War. We’re not sure why his name was left off but we are now making good this omission and celebrating the life of one of Aber’s most colourful alumni.”

Roose came to study the arts and sciences at Aberystwyth University in 1895 and started playing in goal for Aberystwyth Town.

During his first year as a student, he was also selected for the Welsh team and according to rumour, would insist on wearing his old Aberystwyth Town shirt under his international jersey.

During a highly successful career as a goalkeeper, Roose went on to play for a range of leading clubs including Arsenal, Aston Villa and Sunderland.

He led a colourful life off the field too and in 1905 was described by the Daily Mail as one of Britain’s most eligible bachelors.

After completing his studies at Aberystwyth, Roose went on to study medicine in London.

When World War One broke out in 1914, Roose joined the Royal Army Medical Corps despite never completing his medical studies because of his thriving football career.

He later transferred to the Royal Fusiliers and served in the trenches, winning the prestigious Military Medal for his bravery in fending off a flame-throwing attack by hurling grenades at the enemy, despite being wounded.

At the end of the First World War, the University’s Old Students’ Association acquired 10 Laura Place and presented it to the University in memory of staff, students and former students who had lost their lives during the conflict.

The OSA also provided the original roll of honour, which did not include Roose’s name, possibly because his name was misspelt on his recruitment papers and consequently on the war memorial to the missing of the Somme at Thiepval.

The addition of Roose to the roll of honour was the idea of Rhiannon Steeds, former secretary and long standing committee member of the OSA and a keen supporter or Aberystwyth Town Football Club.

“I was motivated to get something done because of the interest in commemorating the centenary of the Somme and because I am strangely attached to this enigmatic, charismatic Old Student,” said Rhiannon.

“I feel very strongly that as current members of the OSA, we are the custodians of our past and must honour the Association's two-fold principles of service and fellowship to the best of our ability with appropriate actions,” she added.

As goalkeeper for Aberystwyth Town, Roose helped the club to victory in the Welsh Cup in 1900 - the only time the Mid Wales club has secured the trophy.

Tony Bates, the current Chair of Aberystwyth Town FC, says Roose is still remembered with affection at the club: “Leigh Richmond Roose still retains iconic status within the Club. He is perhaps the biggest character we have ever had the privilege to call one of our own. He made the football club and the University proud with his life and his sacrifice in the First World War. This is a fitting tribute to an exceptional goalkeeper, a friend to Aberystwyth and a war hero.”

The remembrance plaque will be unveiled in the Old College on Friday 16th December at 10:45am.