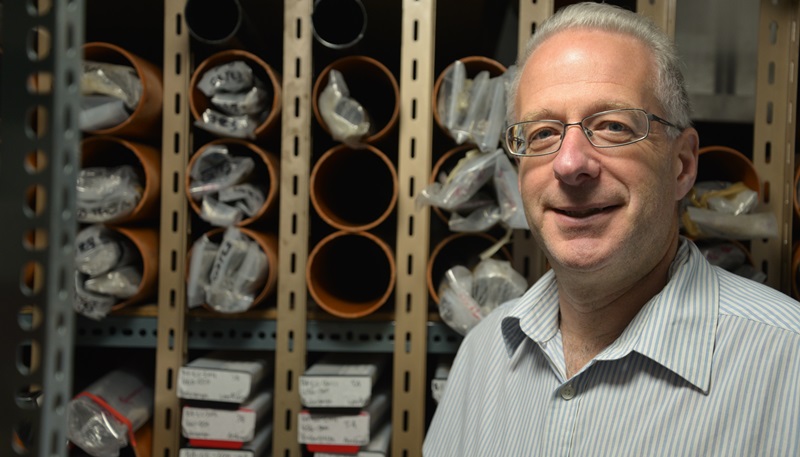 An Aberystwyth University glaciologist will be heading out to Antarctica on Saturday 7 January as part of an international study into the effects of climate change.

Professor Neil Glasser will be joining scientists from Sweden, the USA and Norway for a seven week mission to the East Antarctic Ice Sheet.

Supported by the Swedish Polar Secretariat, the team will be collecting scientific data in Dronning Maud Land to reconstruct the long-term history of how the ice sheet in the area has thinned.

Professor Glasser will be collecting rock samples to bring back to the UK for Cosmogenic Nuclide Surface Exposure Dating – also known as CN Dating.

“CN Dating is a brand-new dating method we are developing that allows us to measure the amount of time the rock has been exposed at the surface – therefore providing an age estimate for when the ice thinned”, said Professor Glasser.

The rocks will be collected from nunataks in the region, rocky mountains several hundred metres high that stick up through the ice sheet.

“The nunataks act as environmental 'dip-sticks'”, said Professor Glasser. “The summits will have been exposed for longer than areas lower down the mountain. Samples taken at different points on the exposed slopes of the nunataks should tell us when the ice receded.”

“CN dating can go back millions of years but we don’t expect to find samples that old. They are more likely to span the last 20,000 years or so, during which time the ice has probably thinned tens to hundreds of metres.”

The team are using a combination of satellite images and field-based mapping to identify all the different sediments and landforms in this area of Antarctica to reveal more information about past ice-sheet thickness and ice-sheet dynamics.

Data collected during the mission will be added to computer simulation models that are designed to show how ice sheets may have looked in the past and how they might behave in the future.

Professor Glasser added: “In order to trust what the simulations tell us we need real-world data to test the model outputs. In the case of our study of Dronning Maud Land, the data we get from the field and lab work will be used to test and improve our ice sheet model, and enable us to reduce the uncertainty in our prediction of future change.”

Professor Glasser has been working on Antarctica since 2004. This will be his third trip to the frozen continent.

His most recent visit was in 2011 when he spent nearly two months working in the area around James Ross Island.

In early 2016 Professor Glasser’s contribution to polar science was recognised by the Antarctica Place-Names Committee who named a glacier on James Ross Island after him – the Glasser Glacier.

As well as Antarctica, Professor Glasser has been researching the effects of climate change on glaciers in South America and estimating their contribution to global sea-level rise.

In the Himalayas he has been quantifying recession of glaciers and how these will impact on future water supply in the region.

The progress of Professor Glasser and the MAGIC-DML mission to Antarctica can be followed in real-time via an online live ‘tracker’.