Love is in the air (and always has been) at Aber 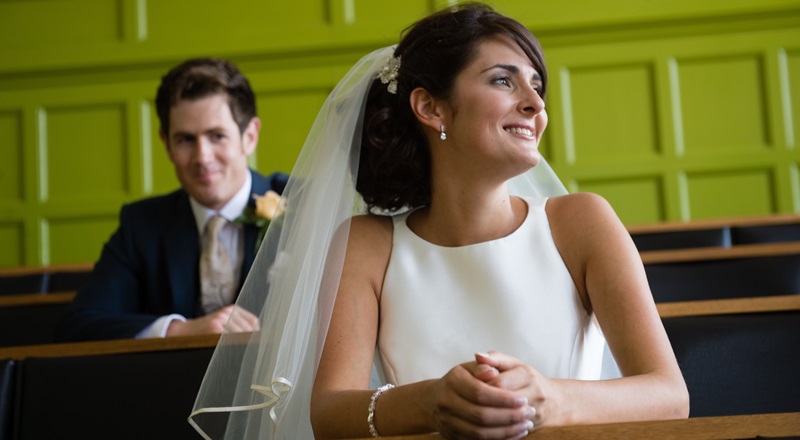 On their wedding day in 2013, Eurig Salisbury and Rhiannon Parry returned to the lecture room where they’d met as undergraduates. Picture: Keith Morris

As Wales celebrates St Dwynwen's Day, Aberystwyth University is on the lookout for romantic stories of past students, couples who met on campus and where love blossomed in the lecture hall.

From today until St Valentine’s Day (14 February 2017), couples who came together when studying at Aber are being encouraged to post their stories and pictures using the #loveaber hashtag.

The aim is to create a visual record of the relationships which have started in the college by the sea over the years.

They could include promenade walks as the sun sets over Cardigan Bay, a picnic on Pendinas or a memorable meal in one of the town’s many restaurants.

Angharad Jones and Llyr Evans will tie the knot later this year having met as students ten years ago when they both stayed at Pantycelyn. Llyr even organised to return there with Angharad for a surprise wedding proposal.

"I'd spoken to the University and managed to get into the room where Angharad stayed during her time at Pantycelyn. I'd redecorated the walls with some of the posters from our time there and popped the question. Aberystwyth University has a reputation for being a friendly and welcoming place and our student memories are certainly very fond ones."

Eurig and Rhiannon Salisbury also met at Aber and recently celebrated the first birthday of their son, Llew. On their wedding day in 2013, they made sure their wedding photos also included the lecture room where they were first introduced.

"The Old College at Aberystwyth is a magical place, it has such a wonderful history and highlights the importance of the University to the town. Rhiannon and I both treasure the memories we have of our time studying here and our wedding photos taken at the Old College are a constant reminder of those wonderful times," said Eurig, who now works as lecturer in the University’s Department of Welsh and Celtic Studies.

As part of the 2017 Santes Dwynwen celebrations, representatives from Aberystwyth’s Welsh students’ union UMCA will today be roaming the campus handing out special postcards and heart shaped chocolates.

UMCA President Rhun Dafydd said: “Aberystwyth University attracts students from all over the world and not everyone is familiar with Welsh traditions. The legend of Dwynwen is ingrained in our folklore so today’s another great opportunity to celebrate our culture and share this special love story with our wider student community.”

Director of Development and Alumni Relations at Aberystwyth University, Louise Jagger, said: “Aberystwyth is an exceptional place to learn and live. Students not only have access to an excellent, research-led education, they also live in a very special place and are part of a very special community. It’s not surprising therefore that so many long-term partnerships are forged  between our students.

“We have alumni all over the world who met here and who look back with very fond memories at their Aber days. We look forward now to hearing more stories about how they met and to see some of their memorable photos either from their time as students or their wedding day.”

Dydd Santes Dwynwen – or St Dwynwen’s Day – is based on the 5th century folk story of Dwynwen, a Welsh maiden and the prettiest of Welsh king Brychan Brycheiniog's twenty-four daughters.

Misfortune befell Dwynwen as she fell in love with Maelon Dafodrill, but they were forbidden from seeing each other as her father had already made arrangements for her to marry someone else.

Distraught, Dwynwen prayed to God and asked for help in forgetting Maelon. An angel visited her in her sleep and gave her a potion to erase her memory of feelings for Maelon and turn him into a block of ice.

Dwynwen devoted her life to God and she was subsequently granted three wishes. Her first wish was that Maelon be thawed, the second that God should meet the needs of all lovers and the third that she should never marry.

Dwynwen set up a convent on the island of Llanddwyn, off the Anglesey coast. The remains of the church can still be seen on the island, along with Dwynwen's well.

It's believed the well is home to sacred fish who can predict whether couples relationships will succeed; if the fish are seen to be active when visiting the well, it was seen as a sign of a faithful husband. The well has since become a place of pilgrimage for young Welsh lovers since Dwynwen's death in the 5th century.