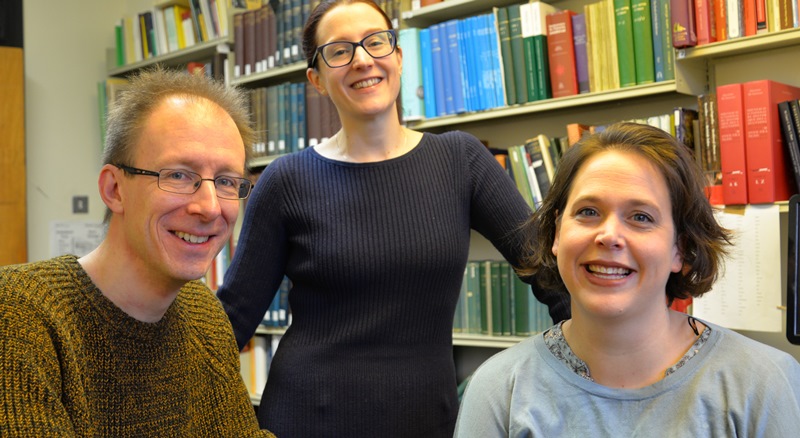 The language of William the Conqueror has received a major boost with the announcement of a further Arts and Humanities Research Council grant for the Anglo-Norman Dictionary based at Aberystwyth University.

A form of French brought to Britain following the defeat of the Anglo-Saxon King Harold in 1066, Anglo-Norman was widely used in Britain until the end of the fifteenth century – the late Middle Ages.

Such was its influence, more than 50% of English words in use today are derived from Anglo-Norman.

Amongst the many culinary English words used today that have an Anglo-Norman origin are ‘soup’, ‘lettuce’, ‘pheasant’, ‘pastry’, ‘ginger’, ‘sauce’, ‘chestnut’ and ‘mustard’.

In its heyday it was widely used as a language of literature, trade, law, education and administration, well before Middle English emerged in the thirteenth century.

Documents such as the Magna Carta and the laws of William the Conqueror, originally composed in Latin, were translated into Anglo-Norman, and medieval poet and contemporary of Chaucer, John Gower wrote in English, Latin and Anglo-Norman.

The Aberystwyth University based Anglo-Norman Dictionary has now been awarded a further grant of just over £800,000 by the Arts and Humanities Research Council (AHRC).

The first edition of the Anglo-Norman Dictionary was published in a series of volumes between 1977 and 1992.

An online and revised version was established in 2001 and was subsequently developed with support from the AHRC, under the leadership of the late Professor David Trotter.

Currently up to letter Q, the section on letter P is due to be published later in this month.

The latest grant will enable the team to write new entries for letters R and S by analysing the vocabulary of the preserved body of works in Anglo-Norman, which currently number over 1000 different sources, augmented by further material that is continually being added from new editions and research.

It will also facilitate the dictionary’s transition into a historical dictionary, by adding a chronology to all entries that shows their function in the historical development of French and English in the Middle Ages.

Dr Geert De Wilde, Principal Investigator, Editor and Project leader with the Anglo-Norman Dictionary, said: “The study of Anglo-Norman is crucial for the understanding of medieval culture and society in Britain and an essential part of the history of the English language. We are delighted with the announcement that the AHRC has agreed to continue to support the current Anglo-Norman Dictionary team, and with it the study of medieval linguistics and the history of language in Britain.”

“Wherever one looks – historical chronicles, medical treatises, legal records – the central role played by Anglo-Norman in the life of medieval Britain is evident, and the development of the dictionary has been instrumental in establishing the language as one of the major dialects of medieval French in general”, added Dr De Wilde.

Dr Heather Pagan, Co-Investigator and Editor on the Anglo-Norman Dictionary (AND), said: "This AHRC award will allow the team to transform the AND into a fully historical dictionary and date every word and meaning within the dictionary. This will lead to a clearer view of the use of the language in medieval Britain as well as illuminating the complex relationship between English, French and Latin during this period.”

“In addition, we will be reaching out to archives throughout Wales to get a better idea of what Anglo-Norman documents survive in Wales, with a view to better understanding how the language was used by those living in Wales.”

Recognised in 2011 with the Prix Honoré Chavée by the Académie des Inscriptions et Belles-Lettres in France, the AND team works closely with dictionaries of medieval French in Nancy, France and Heidelberg in Germany, and with the Oxford English Dictionary.

The latest AHRC grant will also enable the team to promote the knowledge and awareness of Anglo-Norman to a wider public, not only through academic publications and conferences, but also through social media, an Anglo-Norman blog and presentations targeted at archivists, local museums and history societies.

The Anglo-Norman Dictionary is available online and features a blog which provides commentary on the origins of words – the latest edition published on 30 January 2017 features Welsh words in Anglo-Norman. It is also possible to follow the project’s latest developments on Facebook and via Twitter @ANDictionary.