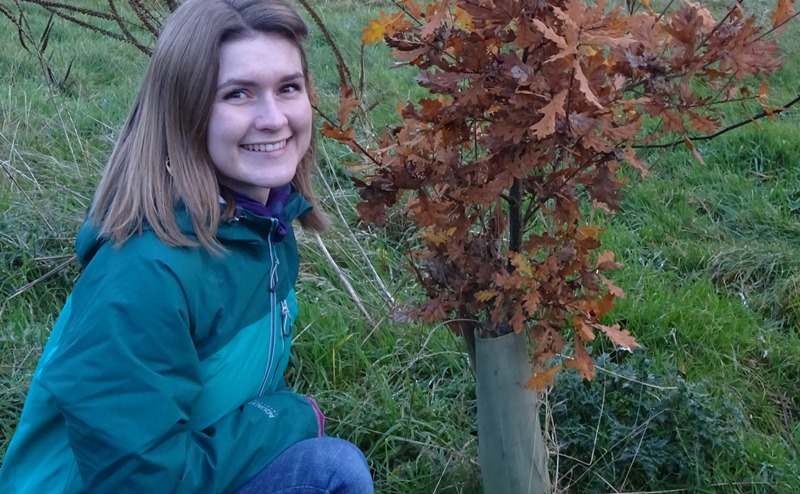 Catherine Duerden with a tree shelter

It is a common sight to see plastic shelters placed on young tree saplings to protect them when growing, but new research suggests that this may also prepare them to survive climate change.

Aberystwyth University graduate Catherine Duerden unearthed the truth about tree shelters while writing her MSc dissertation and the findings have been published in the Quarterly Journal of Forestry.

In it she sets out to determine the long term effects of tree shelters used for protecting young tree saplings against the environment and herbivores.

Speaking of her research Catherine said: “It was surprising that we have used so many of these shelters without really knowing what they do to trees in the longer term. Several million are produced and used in the UK alone each year.

“There are so many used that wherever you go in the developed world you are likely to be within just 1 km of a tree shelter.”

As part of her dissertation Catherine tried to identify past experimental sites where the tree shelters had been tested. But this proved a challenge as decades had passed, experiments had been abandoned, paper records lost and many experimenters retired.

However, in a filing cabinet in a broom cupboard in the Llandovery Forestry Commission offices, detailed records were unearthed from a comprehensive study of Welsh oak trees established in 1994.

Catherine said: “I then revisited this site, which had tested 20 tree shelter types, and was able to look at the success of the sessile oaks after 20 years of growth. What I discovered was that 17 of the 20 shelter types promoted survival, and 12 of the shelter types had significantly increased trees’ stability compared to those grown without tree shelters.

“My findings suggest that once they had outgrown their shelters, with the sudden shock of less protection, the trees had to react quickly and ‘beef-up’ their trunks to become more resistant to the elements.”

Tree shelters became a global phenomenon when early work suggested that this simple and easy to install device could revolutionise forestry, increasing sapling survival and even resulting in taller trees. However, experiments to test these shelters were done for periods of less than 10 years.

Some also argued that the taller, thinner trees produced might become less stable in the future.

Unexpectedly, this new research found that the opposite had occurred for the majority of the trees studied. They were now less likely to break in high winds than the unsheltered trees.

“This is encouraging and may even mean that we have inadvertently prepared younger trees for the extreme events that climate change will bring in the future.”

Catherine was awarded the Price Davies Scholarship to study BSc Physical Geography at Aberystwyth in 2010, and graduated with First Class (Hons) in 2013.

She then moved to the IBERS department to study for an MSc in Managing the Environment, specialising in Habitat Restoration and Conservation.

This was funded by the European Social Fund’s Access to Masters programme and involved working in partnership with Forest Research Wales during her dissertation about the long-term effects of tree shelters.

Catherine said: “My studies in Aber played a key role in developing the knowledge and expertise needed for the work I do now. The MSc in particular also brought out my confidence and people-skills, helping me towards a public-facing, environmental education role that I really enjoy.”