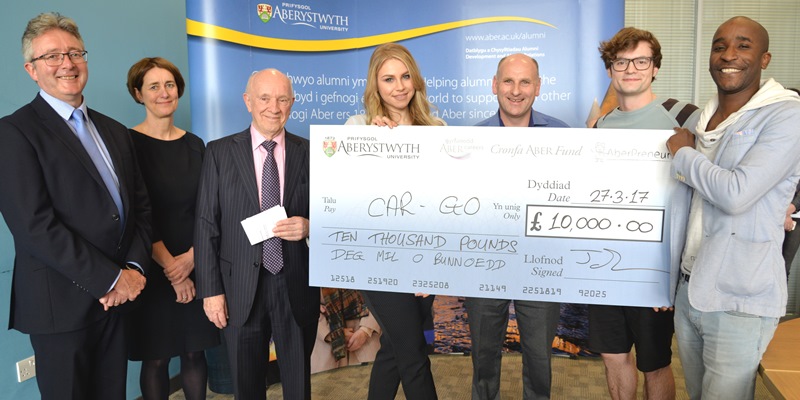 A concept driverless delivery vehicle developed by a team of Aberystwyth University students and a former student has received a £10,000 boost after winning InvEnterPrize 2017.

Ariel and Pasi were presented with a cheque for £10,000 by The Apprentice winner Alana Spencer after InvEnterPrize judges backed their concept on Monday 27 March 2017.

Billed as “perfect for deliveries in residential areas”, Car-go uses a combination of advanced robotics and driverless vehicle technology. Its aim it to significantly reduce “last-mile delivery costs”.

Car-go was one of six finalists to be considered by the 2017 InvEnterPrize panel which consisted of successful Aberystwyth alumni from academia, industry and banking.

Panel chairman Professor Donald Davies, Emeritus Professor in Toxicology at Imperial College London and a Founding Director of ML Laboratories plc, said: “Congratulations to everyone who has been involved with InvEnterPrize 2107. As a panel we were asked to choose six finalists from the original twenty entrants, a task difficult enough in itself. To choose the winner from the six finalists proved to be particularly challenging and our warmest congratulations go to the winning entry Car-go.

“I’m delighted to report that several of today’s proposals were rated by the panel as likely to be good businesses and the quality of the presentations was excellent.

“Car-Go is a very exciting prospect and we wish them every success as they embark on their development journey and start building their prototype.”

“Enabling students to develop business ideas and concepts during their time at university is so important and InvEnterPrize offers them an excellent vehicle for doing this. Further-more, all this has been made possible thanks to the financial support of our alumni, without whose support InvEnterPrize would not happen”, Professor Davies added.

Ariel and Pasi are also working on the development of robot librarian Hugh.

Ariel said: “Preparing for InvEnterPrize has been a great experience. When you work on a project like Car-go it is easy to get knee deep in the detail and almost lose track of how this relates to the outside world. Pitching the concept to someone who is not involved is a great opportunity to reflect on the idea itself.”

Pasi said: “Business start-ups often face a chicken and egg dilemma; to raise funds you need a prototype, and you need funds to build a prototype. The financial backing from Inventerprize will enable us to build our first prototype, provide proof of concept and present it to the outside world.

“Car-go has the potential to radically change the home delivery market and make a valuable contribution to solving the “last-mile delivery problem”.  Our vision is for a robot car that can deliver online orders to people’s homes, possibly within just half an hour of placing the order.”

The winning team were presented with a cheque for £10,000 by Alana Spencer, winner of The Apprentice and founder of Ridiculously Rich, and whose father had been instrumental in setting up InvEnterPrize.

Alana said:  “It’s a real honour to be asked to come back to Aberystwyth to present the winner of the InvEnterPrize, an initiative my father contributed to during his time working at Aberystwyth University.

“Competitions like this are really important to businesses. The opportunity Car-Go has now is incredible - £10,000 towards their business and also help and advice from staff and alumni at Aberystwyth University; this is an amazing opportunity.

“The key to success is to have a goal and a plan. It's really important to have an idea of where you want to go, then work back from that point and learn what you need to do to achieve it. I look forward to hearing a lot more about Car-Go”, she added.

Director of Development & Alumni Relations at Aberystwyth University, Louise Jagger said: “Congratulations to everyone who has made InvEnterPrize 2107 such a success, and in particular to Car-Go for their concept and winning the backing of the judges. Support of this kind can mean so much to someone with a great idea who needs financial support and guidance to get it off the ground. We are very grateful to the alumni who continue to give so generously towards the Aber Fund which funds the prize money, and to the alumni and supporters for giving time to be on the judging panel.”

InvEnterPrize is organised by AberCareers as part of its programme of support, practical help and advice to students who are interested in developing innovative and enterprising business ideas.

Donald Davies - Emeritus Professor in Toxicology at Imperial College London and a Founding Director of ML Laboratories plc (pharmaceuticals) one of the first public biotechnology companies to be listed on the London Stock Exchange. Chair of Panel.

Nigel Davies - After graduate and postgraduate studies in Aberystwyth, Nigel worked for 30 years in corporate technology and business. In 2003 he was the founding director of Innoval Technology, which is a UK, technology-based consultancy with a global client base.

Peter Gradwell - Peter studied Software Engineering at Aber, graduating in 2002. While at University he founded his own internet communications company, Gradwell dot com Ltd which now employs 65 people and has an annual income of over £7m.

Huw Morgan - Former Head of Business Banking, HSBC Bank plc, Huw worked for HSBC for the majority of his working life. He was most recently responsible for Business Banking and Franchising for the UK

David Sargen - Managing Partner of Derivatives Risk Solutions LLP, a specialist risk consultancy providing expertise across a broad spectrum of disciplines within the financial industry, with a particular focus on the global derivatives market.