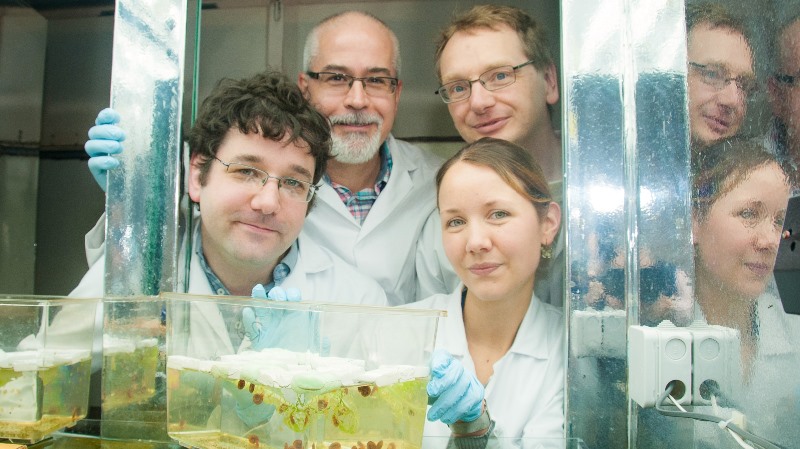 Scientists at Aberystwyth University have contributed to international efforts to characterise the genome of a snail species responsible for passing on a parasite that kills 200,000 people every year.

Researchers at the University’s Barrett Centre for Helminth Control (BCHC) at the Institute of Biological, Environmental and Rural Sciences have been studying the snail Biomphalaria glabrata which transmits the neglected tropical disease schistosomiasis, also known as Bilharzia.

Their latest findings are published today, Tuesday 16 May 2017, in Nature Communications and are expected to contribute to the World Health Organisation’s goal of eliminating schistosomiasis as a global health problem by 2025.

They are also expected to lead to new strategies for improving the lives of those living with this debilitating and deadly disease.

Currently, more than 600 million people living in Africa, Asia and South America are infected by the highly-pathogenic blood fluke worm.

People are susceptible to infection when they bathe, play, swim, wash, fish or walk through water infested by the parasite released from the aquatic snail.

As part of this international collaboration, the BCHC team of Drs Martin Swain, Kathy Geyer, Iain Chalmers, Umar Niazi and Professor Hoffmann were responsible for identifying and characterising microorganisms found living within the snail.

While simple single-cell animals have previously been detected within B. glabrata tissues, the Aberystwyth team’s finding represents the first discovery of co-inhabiting microbes.

Together, these animal and microbial cells likely play important roles in the developmental biology of the snail, much like those facilitated by the micro-organisms that live in or on humans.

Professor Hoffmann said: “These findings open up the possibility of controlling schistosomiasis by encouraging or engineering these natural microbes to turn against the snail, thereby reducing snail numbers and parasite transmission in endemic areas”.

In a parallel investigation, simultaneously published in PLoS Neglected Tropical Diseases on Tuesday 16 May 2017, the same Aberystwyth team helped identify a set of genes that are used by the snail to control normal biological processes, including snail reproduction.

They specifically went on to show that the parasite is able to re-programme the normal functioning of these snail control genes.

“We believe that it is possible to combat the parasite by manipulating these genes so that energy can be taken away from snail reproduction and instead provided to boost snail immunity, ultimately limiting the transmission of schistosomiasis in endemic areas”, adds Dr Geyer.

The Aberystwyth team, alongside its international partners (including valuable contributions from the following UK institutes: University of Aberdeen, Brunel University, Kingston University, the Natural History Museum, the European Bioinformatics Institute and Westminster University), is now working towards extending these findings into practical solutions for controlling snail numbers in schistosomiasis endemic areas.

By pursuing this research agenda, new and urgently-needed strategies for controlling a deadly tropical disease will be uncovered.

This work conducted by the Barrett Centre for Helminth Control scientists has been funded by the Biotechnology and Biological Sciences Research Council – BBSRC.