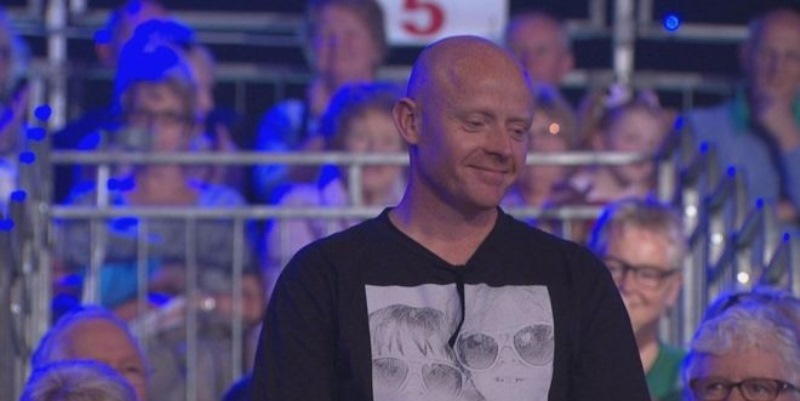 Gwion Hallam, winner of the Crown at the 2017 National Eisteddfod.

Aberystwyth University alumnus Gwion Hallam has won the Crown at the National Eisteddfod of Wales in Anglesey.

A television producer and former President of Aberystwyth’s Welsh Students’ Union UMCA, Gwion was crowned at the traditional ceremony held in the main pavilion of the Eisteddfod on Monday 7 August 2017.

Born in Ammanford, Gwion Hallam now lives in Felinheli with his wife Leri and their children Noa, Moi, Twm and Nedw.

As a student at Aberystwyth University, he studied creative writing under the late Professor John Rowlands and Mihangel Morgan.

When he was younger, he won the Crown at the Urdd National Eisteddfod in Bro Maelor in 1996. Since then, he has worked as a scriptwriter for television and radio, and was commissioned in 2004 to co-write ‘Deinameit’ - a gritty stage production for the Llwyfan Gogledd Cymru theatre company.

Gwion has also published two volumes of children’s verse and in 2005, Gomer press published his first novel Creadyn (Creature) in the Whap series for teenage readers.

He came close to winning the Crown at the National Eisteddfod in Montgomeryshire in 2003, but did not write much poetry for several years after that.

The crown was presented this year for a poem of no more than 250 lines not written in strict metre and entitled Trwy Ddrych (Through a Mirror).

The adjudicators’ decision was delivered on the Pavilion stage by Professor Thomas who said their job had not been an easy one: “The three of us agree that an unusually large number of poems managed to reach a very high standard this year... and the general standard of the competition may well outclass previous competitions… We had a most wonderful quandary. So many excellent poems, but only one Crown.”

Gwion was congratulated on his success by Dr Rhodri Llwyd Morgan, Pro Vice-Chancellor at Aberystwyth University: “The announcement of the winner of the Crown is always a highlight at the Eisteddfod but there was an extra buzz today when we heard that the poet was an alumnus of Aberystwyth and that creative writing was among the subjects he studied here. Many congratulations to Gwion and we look forward to reading his winning composition.”

Aberystwyth University at the National Eisteddfod