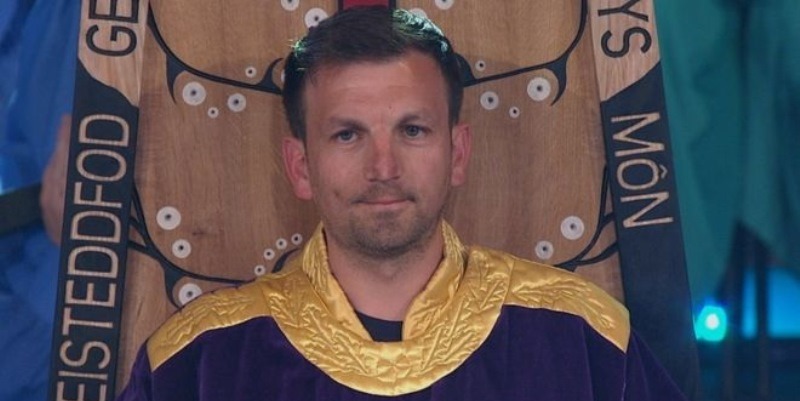 Osian Rhys Jones' victory in the Chair was the third major literary award to be won by Aberystwyth alumni during the 2017 National Eisteddfod.

Osian Rhys Jones, who graduated in Welsh and Welsh History from Aberystwyth University, is the winner of the Chair at the National Eisteddfod of Wales which is held this year on Anglesey.

The Chair this year marks the centenary of the Black Chair of Birkenhead which was won by Ellis Humphrey Evans, Hedd Wyn, who was killed during the battle of Passchendaele, weeks before the ceremony.

Crafted partly from oak and ash grown at yr Ysgwrn, Hedd Wyn’s home, this year’s chair is the work of another Aberystwyth University graduate, Rhodri Owen, who studied Fine Art at the School of Art.

Osian’s victory follows the success of two other alumni who have won major literary awards at this year’s Eisteddfod.

On Monday Gwion Hallam won the Crown and on Thursday another Department of Welsh graduate, Heiddwen Tomos, won the Eisteddfod’s Drama Medal.

In congratulating Osian on his success, Dr Cathryn Charnell-White, Head of the Department of Welsh and Celtic Studies said: “On behalf of his alma mater, it is a pleasure to congratulate Osian on winning the Eisteddfod Chair this year. It is appropriate that he should win a chair for which ‘regeneration’ is part of its fabric, because through his poetry and his engagement with the poetry scene, Osian demonstrates the relevance and contemporary spirit of the traditional strict metres.”

The Chair was awarded for a poem in more than one of the traditional poetic measures of no more than 250 lines on the subject of The Hero or Heroine.

The Hero was the title one hundred years also, at the Black Chair Eisteddfod in Birkenhead, where Hedd Wyn won.

The judges were Huw Meirion Edwards, Emyr Lewis and Peredur Lynch, who presented the adjudication of stage on their behalf.

There were twelve entries this year, with five of these in the highest category in a competition of a very standard.

When presenting the adjudication on behalf of the judging panel, Peredur Lynch said, "There were five in the race, but do any merit the prize? Well, if it's genuine merit we’re looking for we’ve found it here in Anglesey this year. Three of the competitors - Ail Don, Merch y Drycinoedd a Gari – are completely worthy of the chair, and it was a very close competition. I was of the opinion that Merch y Drycinoedd should have won.  But Emyr and Huw favoured Gari.  And I, of course, accept the majority decision and happily declare that the nom de plume of the winning bard is Gari.

"Gari's poem is an intense psychological one. It opens in November with a young man about to throw herself off a bridge into the path of a train. But then he abstains. At the end of the dramatic opening we are guided through the dark months of winter until the arrival of May and the poem chronicles the life of the main character over a period of seven months. We are in the company of a person who is overwhelmed by the pressures of life, one who is looking for meaning to their life. There is an overwhelming sense of being trapped here as the young man battles with social expectations which he is cynical about. By the end of the poem it is May. The poet is back on the railway bridge. He has succeeded to make wings to escape from his circumstances. But the end is ambiguous. Did he make wings to escape from depression, or have the confidence to jump off the bridge? That is the mystery that closes the poem."

Osian Rhys Jones is a producer and digital editor in Cardiff. He was brought up near Y Ffôr, Pwllheli and was a pupil at Ysgol Glan y Môr and Coleg Meirion Dwyfor in the town.

After graduating from Aberystwyth University he spent some years working in the Digital Development Department of the National Library of Wales, also in Aberystwyth.

He is a member of Y Glêr team on BBC Radio Cymru's Talwrn y Beirdd series, the team that won the series in 2012 and again this year, 2017.

In the same year, Y Glêr was the first team to complete Literature Wales’ 100 Welsh Poems Challenge, by jointly composing a hundred poems over 24 hours. In 2011, Osian was one of the crew who set up the Bragdy’r Beirdd poetry nights in the capital and these popular poetic events continue to be held regularly in Cardiff.

As well as organising these evenings, Osian participates in literary evenings throughout Wales.

In 2012/13 he was one of four who travelled with the poetic and musical show, ‘Cnoi Draenogod’. He won the D. Gwyn Evans (Y Gymdeithas Gerdd Dafod) Memorial Prize twice and won the Cledwyn Memorial Trophy for a poem on the Talwrn y Beirdd series in 2011.

The Chair was presented to the National Eisteddfod this year by the Snowdonia National Park Authority who have been restoring Hedd Wyn’s home, Yr Ysgwrn.

Its creator, Aberystwyth University Fine Art graduate Rhodri Owen talked about the chair and its creation. “The idea of reincarnation and moving forward is central to the concept of this year’s Chair.  But the link with the past is also very important, and I considered the shapes of the tools and implements used daily in rural life a century ago when working on the design.

“The two back legs rise towards the ‘moon’, in the shape of scythes, with the bottom of the back in the shape of two marking irons, which would have been used to mark the turf before chopping the peat in agricultural areas.  The two back to back shapes, creating one waving iron, which would cut the turf after the marking, point towards the underworld, representing darkness and death, while the top of the Chair and the Nod Cyfrin represent light and a new life.

“I’ve also considered the fact that this year’s Eisteddfod is held in Anglesey, so the Celtic link is obvious, as are the Celtic ideals of reincarnation and moving from the dark to the light, depicted in the design.  The seeds of life rise as the darkness surrenders to the light and the hope of a new, peaceful life in a time of political uncertainty worldwide and a crisis of Welsh identity.

“The Park Authority and I wanted the Chair to convey its own message, and I hope I have achieved this, emphasising the need for the Welsh nation to confidently step forward to a new, better and peaceful future.”

The Chair was created at Rhodri’s workshop in Ysbyty Ifan.