Solar scientists head for the US to study eclipse 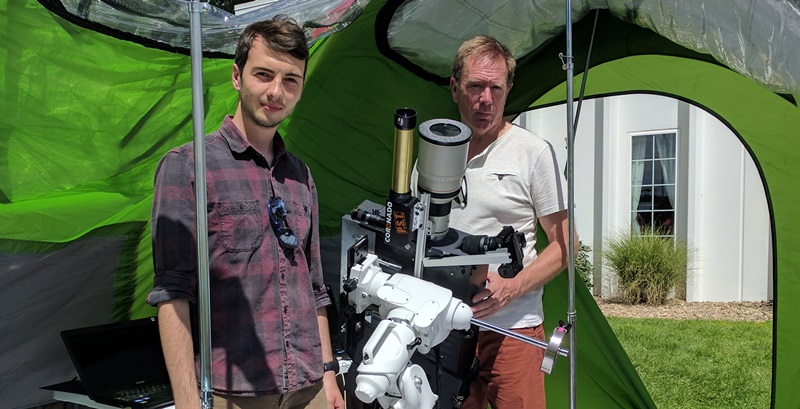 Researchers from Aberystwyth University have joined an international team of solar scientists in the USA this week as they prepare to study the latest total eclipse of the sun.

Joe Hutton and Steve Fearn from the Department of Physics have joined scientists from Germany, the Czech Republic and the USA at Boulder, Colorado, as the team makes its final preparations to record the solar event on Monday 21 August.

Five teams will be based at different locations along the trajectory of the eclipse as it crosses the US from Oregon in the north west to South Carolina on the east coast.

Based in the rural north western town of Mackay, Idaho, the most westerly observation point, the Aberystwyth team will be first to record the event.

There they will deploy a new spectrometer designed to capture the light of the eclipse during totality, which lasts approximately two minutes.

The size of a large briefcase, the spectrometer has been designed by Professor Adalbert Ding from the Institute of Technical Physics, Berlin, Germany and built by him with the assistance of the Solar System Physics Research Group at Aberystwyth University.

Using a series of lenses and cameras, it captures the light from the sun’s corona before splitting it into several channels, in a manner similar to a prism.

The information collected from the refracted light will enable the team to measure the physical properties of the sun’s atmosphere, its temperature, density and magnetic field.

Dr Huw Morgan is Principal Investigator for the Aberystwyth spectrometer. The project is funded by the Science Technology Facilities Council as a testbed for technologies that may lead to new science and future missions.

Dr Morgan said: “We are so lucky on earth that the moon is just about the right size to obscure the sun every so often and cause an eclipse. Occasionally the two align and the moon hides the main disk of the sun and amazingly we can see the sun’s atmosphere at this point. It’s a great chance for us as scientists to observe and learn more about the atmosphere of the sun”.

“The atmosphere of the sun is an extreme environment of hot magnetized plasma where temperatures reach 1,000,000 degrees centigrade, and one that is very difficult to replicate in laboratories on earth. A total eclipse offers a unique opportunity to study the corona of the sun and the chance to learn new fundamental physics.

“There is also the issue of space weather”, added Dr Morgan. “Huge explosions from the atmosphere of the sun in the form of Coronal Mass Ejections can damage technological infrastructure on earth. A better understanding of this phenomenon is essential to improving our ability to predict these events and provide better protection for communication satellites that deliver systems such as Global Positioning Systems (GPS), which we are increasingly dependent on.”

Dr Huw Morgan is a seasoned eclipse tracker. Between 2006 and 2010 he travelled to the Sahara Desert, the Gobi Desert, the Marshall Islands and Tahiti in the Pacific Ocean to take measurements during total eclipses of the sun.

On this occasion Dr Morgan will be based in Aberystwyth, whilst the opportunity of studying the eclipse at first hand falls to Steve Fearn, an experimentalist and technology expert at the Physics Department, and Joe Hutton, a Research Associate with the Solar Physics Research Group.

Joe and Natalia Alzate, a former member of the Aberystwyth Solar Physics Group who is now working at the University of Hawaii, joined a similar international expedition to the Norwegian archipelago of Svalbard, in the high arctic, to study the 2015 eclipse.

Joe and Steve have contributed to the assembly and testing of the new spectrometer.

Speaking ahead of the mission, Joe said: “Totality only lasts two minutes in one given spot, but the shadow of the moon will make landfall in the USA for a total of about an hour and thirty minutes, as it slowly sweeps across. By having these five observations points along this path of totality, we can build up a time series of the solar atmosphere using the eclipse observations, something which hasn’t been done before on this scale. So it is very exciting.”

The international eclipse team is led by Professor Shadia Habbal, Professor of Solar Physics at the University of Hawaii and a former Professor at the Department of Physics at Aberystwyth University.