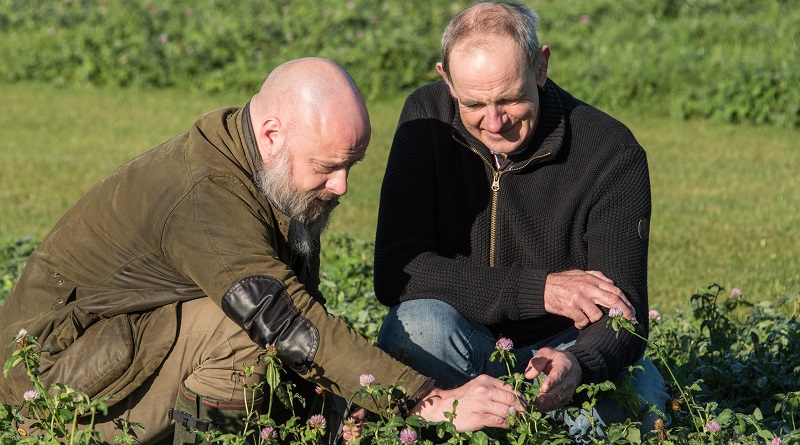 IBERS scientists Dr Leif Skøt (right) and Dr David Lloyd, studying red clover, one of the protein sources to be studied as part of the European and Chinese legumes EU funded project EUCLEG. Not pictured are the other team members, Dr Rosemary Collins and Mr Huw Powell.

The work at Aberystwyth University is led by Dr Leif Skøt from the Institute of Biological, Environmental and Rural Sciences (IBERS).

Dr Skøt said: “Europe and China have in common a low level of home grown protein. They import 30% and 60% respectively, of the world plant protein production for both human and animal nutrition.

The project will focus on alfalfa and red clover, peas, faba beans and soybeans.

Selected for their agronomic properties, economic relevance and current use in Europe and China, the study aims to generate new varieties and fresh momentum in growing these potentially significant crops.

The development of legume-based grassland–livestock systems is acknowledged as a cornerstone for more sustainable and competitive ruminant production systems.

Dr David Lloyd, IBERS legume breeder said: “Grain legumes have a major role in EUCLEG, however, the project will also focus on forage crops that can deliver up to 2.3 tonnes protein per hectare per year while grain legumes reach up to 1.3 tonnes/ha.”

The team aims to broaden the genetic base of legume crops, to analyse the genetic diversity of European and Chinese legumes by looking at yield and quality in the context of climate change.

This will lead to understanding the genetic architecture of key breeding traits using the latest genetic techniques and to evaluate the benefits brought by genomic selection to create new legume varieties.

The breeders in the EUCLEG consortium will exploit these results to create the new varieties needed to improve protein production.

Comprehensive searchable databases containing passport data, as well as agronomic and genetic features will be developed.

Additional positive environmental impacts from the EUCLEG project include other ecosystem services such as energy saving, improvement of soil structure and composition, reduction of greenhouse gas emissions, and biodiversity.