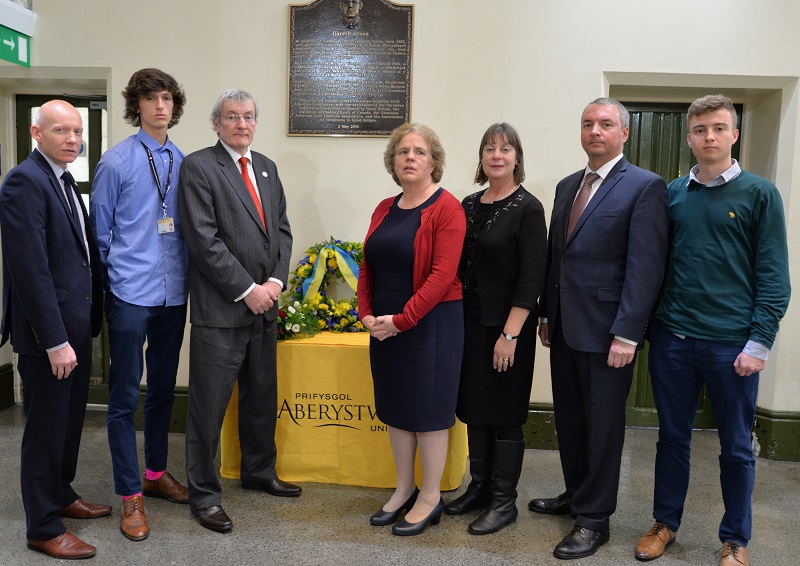 Andriy Marchenko, Minister-Counsellor at the Ukrainian Embassy in London (second from right) and Professor Elizabeth Treasure, Vice-Chancellor of Aberystwyth (centre) at the wreath laying ceremony in memory of former Aberystwyth University student Gareth Jones who exposed the Ukraine famine of 1932-33.

Deputy Ambassador of Ukraine to the UK has placed a wreath in memory of former Aberystwyth University student Gareth Jones who exposed the Ukraine famine of 1932-33.

Minister-Counsellor Andriy Marchenko travelled to Aberystwyth on Thursday 23 November for the wreath-laying ceremony at the University’s Old College.

The delegation from the Ukrainian Embassy in London wanted to honour Gareth Jones as part of the 85th anniversary of Holodomor, the Great Famine which killed between 7-10 million people in Ukraine.

Gareth Jones was one of the first journalists to expose Stalin’s policy of deliberate starvation and is widely considered a hero in Ukraine.

Speaking at the Old College, Mr Andriy Marchenko said: “The 85th anniversary commemorations of the Holodomor, the Great Famine in Ukraine in 1932-1933 will officially commence this year on 25 November. Today we pay tribute to the brave young Welsh journalist, the Aberystwyth University alumnus Gareth Jones. Despite the risks to his life, he played a significant role in disclosing the crime of the Holodomor starvation to the rest of the world and struggled for truth at the time when most others publicly denied it.

“Today, seventeen nations including Canada and the US have officially recognized the Holodomor in Ukraine as genocide. It is our sacred duty to the millions of victims of the Holodomor and the brave Gareth Jones to remember them and to make their story known to the world as one of the most tragic pages in the history of the twentieth century.”

The Vice-Chancellor of Aberystwyth University, Professor Elizabeth Treasure, said: “Gareth Jones was a talented linguist and a man of principle who accomplished much in his short life. We are privileged to acknowledge him as a student of this University and we honour his bravery in speaking out about the policies which led to the deaths of millions of ordinary people in Ukraine.”

Staff, current students, members of Aberystwyth’s Old Students Association and local dignitaries gathered at the Old College for the commemoration service led by the Ukrainian Embassy deputation, as wreaths were laid in memory of Gareth Jones.

The great nephew of Gareth Jones, Nigel Colley, joined the University and the Ukrainian delegation in laying a wreath beneath the plaque in his memory in the Quad of the Old College.

“In these times of ‘Fake News’, Gareth Jones’ exemplary reporting of the 1933 famine to the world, without distortion or manipulation, stands out as a beacon for honest journalism, which is just as important now as it was back in 1933,” said Nigel Colley.

A short extract from the feature film ‘Bitter Harvest’, set in Ukraine in the 1930s, was also shown at the event.

Born in Barry, Gareth Jones gained a First Class Honours in French from Aberystwyth University in 1926 before going on to graduate in French, German and Russian from Trinity College, Cambridge, in 1929.

In 1930, he was appointed as a foreign affairs advisor to former Prime Minister and fellow Welshman David Lloyd George.

Gareth Jones travelled widely and during his visits to the former Soviet Union, he spent two months in Ukraine where he witnessed the ravages of the famine at first hand.

He wrote articles about the famine for a series of newspapers including The Times, The Manchester Guardian and the Western Mail but his reports were met with scepticism from some quarters.

Gareth Jones was killed by bandits on the eve of his 30th birthday while reporting on the Japanese occupation of Inner Mongolia in 1935.

The Acting Director of Aberystwyth University’s International Office, Katerina Stivasari-Jones, said: “Aberystwyth University has more than 60,000 alumni across the world who are all making a contribution to the world in which we live. As we commemorate Gareth Jones we applaud his remarkable achievements as a journalist, his integrity and his dedication to his profession. He remains a shining example to us all today.”

The Ukrainian delegation were also given a guided tour of the National Library of Wales as part of their visit to Aberystwyth.

Ukraine Embassy to the UK