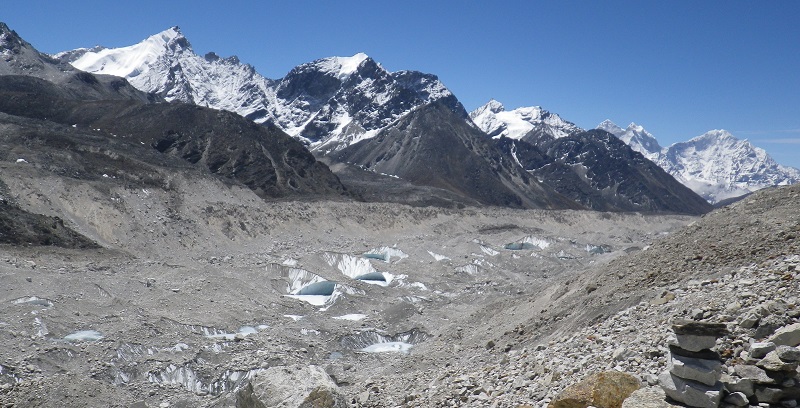 View of debris-covered lower part of Khumbu Glacier highlighting the prevalence of ponds and ice-cliffs which characterise the surface. The glacier is around 500m wide at this point. Credit: Dr Trystram Irvine-Fynn

The flow of water that supports hydro-electric and irrigation infrastructure in the mountain regions of Nepal and India is regulated by hundreds of large icy ponds on the surface of some of the world’s highest glaciers, scientists have revealed.

Writing in the journal Geophysical Research Letters, a team of glaciologists led by Aberystwyth University have shown that the ponds, which form on debris-covered glaciers in the Himalaya, control the rate at which water from melting ice flows downstream.

With many covering an area of up to five times the size of an Olympic swimming pool, their hydrological role, specifically to the extent which they can store water on the glacier surface, has remained unknown until now.

Study leader Dr Tristram Irvine-Fynn from the Department of Geography and Earth Sciences at Aberystwyth says that the role of these ponds could become increasingly important as the region’s climate changes.

“The hydrological role of ponds and debris may become more significant in the future. By understanding these processes we can become more confident in our predictions of water security and ecosystem response in the Himalaya,” said Dr Irvine-Fynn.

Study co-author Professor Neil Glasser from Aberystwyth University says: “Runoff from glaciers in the local region is an important freshwater supply and is used for agriculture and hydro-electric power. Water flowing from glacierised catchments in the Himalaya is a critical water resource for mountain dwellers in particular, and impacts on flows reaching the lowlands too”.

Working with colleagues from the Centre for Glaciology at Aberystwyth University, Dr Irvine-Fynn has uncovered the hydrological function of surface ponds on Khumbu Glacier in the Everest region of Nepal.

The team monitored the meltwater runoff from Khumbu Glacier, which descends from Mount Everest, for nearly 200 days through the summer monsoon season.

The high-resolution measurements of water flow showed two unexpected patterns: first, the water volumes released by the glacier were out of phase with daily solar radiation, and second, temperature cycles and the rate of change in runoff after peak flow did not decline smoothly.

As Dr Irvine-Fynn explains: “The pattern of meltwater flow decline, or the ‘flow recession’, was really intriguing and didn’t seem to match the patterns that have been reported for clean ice glaciers in the Alps or Svalbard in the Arctic Circle.”

The scientists explained the pattern of water flow as being delayed by the ponds and debris which reduce the rate at which meltwater is transferred across the glacier surface.

“I’ve never seen this type of behaviour in all the proglacial rivers I’ve monitored in my 25-year professional career, it was fascinating and shows the difference debris-cover makes,” said Dr Philip Porter of University of Hertfordshire, the article’s primary co-author.

The study’s authors interpreted the intriguing pattern of flow recession to be caused by the ponds on the glacier surface which delay meltwater delivery to the glacier’s margin - a hydrological behaviour which matches that seen in runoff from a series of reservoirs.

“The pond reservoirs are capable of accommodating the daily average monsoon rainfall, and so it is the storage volumes of those ponds, and the connections between the ponds and through the debris which will control the water flow rates,” said Dr Irvine-Fynn.

Debris-covered glaciers in the Himalaya are at high elevations, and typically they experience cold air temperatures for much of the year. This freezing climate adds a complexity to the process Dr Irvine-Fynn’s team have identified.

“The important thing is recognising that many of the debris-covered glaciers in the Himalaya are at high elevation and so experience below-zero average annual temperatures. The debris layer may be frozen for part of the year, and thaws during the monsoon season. This thawing process will change how the ponds are linked. So, it is really informative to start considering the debris-cover on Himalayan glaciers in the same way coarse sediments in permafrost regions such as northern Canada behave,” says Dr Irvine-Fynn.

The prevalence of debris-cover and the associated ponds has also been predicted to increase with the region’s changing climate.

The project was funded by the Royal Society and British Society for Geomorphology grants awarded to former Centre for Glaciology scientists Drs Ann Rowan and Duncan Quincey (now at Universities of Sheffield and Leeds, respectively).

Researchers at the Universities of Hertfordshire and Sheffield Hallam were also involved.