Marking the 60th anniversary of TWW - Television Wales and the West 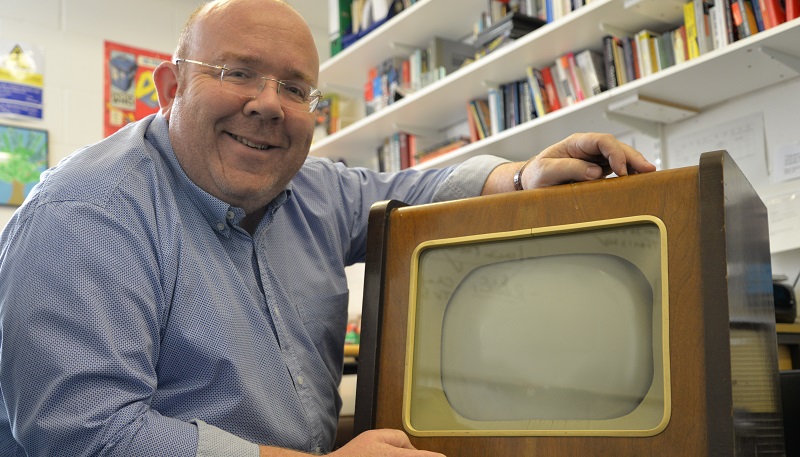 Dr Jamie Medhurst, Co-Director of the Aberystwyth University Centre for Media History and Reader in Media and Communication at the Department of Theatre, Film and Television Studies

Sixty years on from the launch of independent television company Television Wales and the West, Dr Jamie Medhurst, Co-Director of the Aberystwyth University Centre for Media History, looks back at its early days.

“Once described by Winston Churchill as a ‘tuppeny Punch and Judy show’, ITV has been part of the British broadcasting landscape since 1955.

Established after fierce debate inside and outside of Parliament, ITV broke the BBC’s monopoly on broadcasting and introduced a new style of programming which proved to be very popular with the expanding television audience.

Based on a network of regional companies, the ITV network slowly spread from London in 1955, the Midlands and north-west of England in 1956 and then to Wales in 1958.

On 14 January 1958, the St Hilary transmitter in the Vale of Glamorgan opened and Television Wales and the West (TWW) began to transmit ITV network and regional programmes to south Wales and the west of England.

The new company soon gained a loyal audience and, in addition to carrying popular programmes such as Coronation Street and Sunday Night at the London Palladium, also gave the BBC a run for its money in terms of locally-originated programming.

One area in which TWW pioneered was Welsh-language quiz shows. Programmes such as Taro Deg (which was later adapted for the non-Welsh speaking audience as Try For Ten) and Pwy Fase’n Meddwl (‘Who’d Have Thought It’) broke new ground in Welsh entertainment.

The company was aware that Welsh-speaking audiences wanted programmes which entertained as well as those which sought to inform and educate.

TWW also produced the popular Land of Song/Gwlad y Gân, fronted by the charismatic tenor, Ivor Emmanuel, and set in the fictional village of Llantelly. The programme was shown across the ITV network between 1958 and 1964.

Despite taking over the failing Welsh ITV company, Teledu Cymru/WWN (which broadcast in west and north Wales from September 1962 until May 1963) in 1964, TWW lost the ITV contract in 1967.

The following year a new chapter in Welsh broadcasting history opened when Harlech Television – later HTV – went on the air.”

Dr Jamie Medhurst is Reader in Media and Communication at the Department of Theatre, Film and Television Studies and Co-Director of the Aberystwyth Centre for Media History at Aberystwyth University.

He is currently leading Leverhulme Trust funded research project into the relationship between television and society in Wales during the 1970s.

His book, A History of Independent Television in Wales, was published by University of Wales Press in 2010.