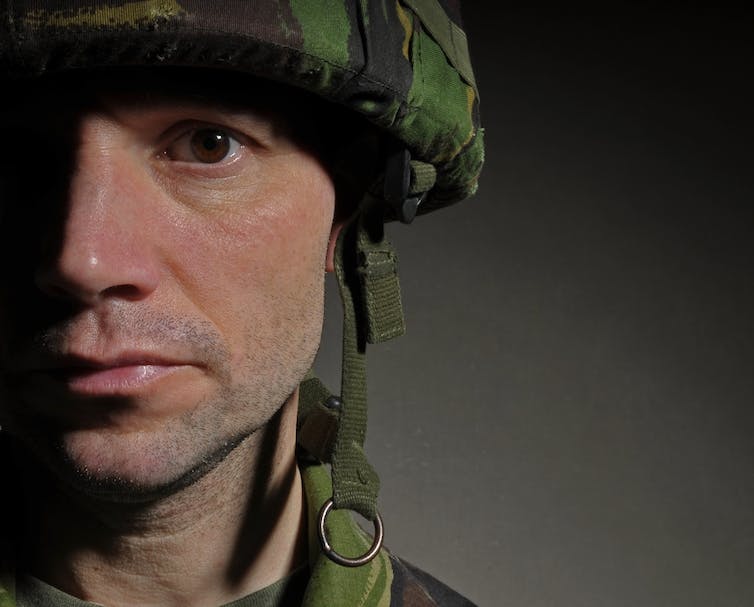 Though it was built around a message of inclusiveness and “belonging”, the British Army’s latest recruitment campaign has provoked considerable criticism.

The advertisements were created to encourage all kinds of people to join the armed forces – regardless of race, religion, sexual orientation or gender. In one of the video segments, a woman soldier discovers opportunities for leadership and respect for her achievements. In others, the army is shown as welcoming gay men and Muslims into the ranks. Potential recruits are reassured that soldiers are not expected to be emotionless machines. They will not be shunned for experiencing fear, anxiety or sorrow.

Previous recruitment drives have portrayed scenes of soldiers facing pressured and challenging situations, using sophisticated and expensive equipment. The new campaign, by contrast, focuses on addressing everyday concerns rather than immersing its audience in the adrenaline rush of combat.

Much of the disapproval has focused on the suggestion that the army supports soldiers who are struggling with mental health issues. Some critics have warned that the army is becoming “soft”, is too concerned about being “jolly nice” to its recruits, and is losing sight of its fundamental mission.

Others, such as retired colonel Richard Kemp, warn that this shift in emphasis means the British Army will not attract the right sort of recruits – those who are excited by the prospect of fighting wars. Instead, he argues, the army should continue to focus its attention on its traditional core of prospective soldiers, “those who want to fight”.

This kind of criticism – especially the accusations that a once-great institution is pandering to political correctness – can be found whenever efforts are made to encourage greater diversity. But here it also reveals the persistence of romanticised ideas about what it means to be a soldier. These ideas have a strong hold on society’s imagination. But they are, in fact, far from the reality of the modern army, and the needs of individual soldiers.

These responses are very telling of who these critics think are the right sort of soldiers: men who will show a stiff upper lip in any circumstances. Kemp and his fellow critics are not the only ones to associate being a soldier with being a man, and a certain type of man. We might think this is because militaries are mainly staffed by men, but it is much more complicated than that.

Being a soldier is not simply a job that some men do. Instead, becoming a soldier is often equated with becoming a man, even in a society like Britain where very few young men join the armed forces. The traits that are regarded as necessary or admirable in a soldier – strength, courage, aggressiveness and the ability to use violence and show stoicism in the face of physical and emotional pain – are also held up as an ideal of masculinity that all men are measured against.

One reason for the strong reaction against the recruitment campaign is that it calls into question very basic ideas about what it means to be a “real man”. If we cannot count on the notion of the soldier as a manly man, what other assumptions about gender, identity and behaviour might not be what we thought?

There is evidence to support the idea that the way British (male) soldiers think about their own masculinity is changing – as a result of the different types of tasks that they are now required to carry out. Research indicates, for example, the development of “peacekeeper masculinity” within the British Army, which encourages and values qualities such as care, empathy, equality and mutual respect.

In addition to being out of date, the traditional notion of the soldier as tough, aggressive and unemotional is damaging – both to the soldiers themselves and to others around them. It creates enormous pressures on men to live up to impossible standards of masculinity. Those pressures can contribute to antisocial behaviour, such as domestic violence towards their partners and sexual abuse against fellow soldiers, both male and female.

When soldiers do find they are suffering from post-traumatic stress disorder or other forms of mental illness, these ideas about keeping a stiff upper lip and denying their emotions can stop them from seeking and getting the help that they need.

The “belonging” campaign does not mark an end to the pressures on soldiers to live up to unachievable stereotypes of masculinity. It does, however, suggest that the British Army is willing to challenge those stereotypes and put forward a more varied and realistic set of alternatives.