Writing in the Conversation, Dr Jenny Mather from the Department of International Politics discusses Vladimir Putin's use of military force.

Vladimir Putin seeks to present an image of Russia as a country that is strong, decisive, and able to reshape the world to its own ends. One of Moscow’s favourite tactics is to use military intervention even while Russian officials deny that they are doing any such thing – a practice employed extensively in the conflict in eastern Ukraine, for example.

Some observers interpret this duplicity as evidence that Putin has a free hand to act as he chooses, unconstrained by the norms observed by other states. But while Putin is willing to break the rules of global politics, this does not mean he operates without constraints. Instead, the constraints on his use of the military are to be found at home: the views of Russian society.

From the very beginning of Russia’s military intervention in Ukraine, Moscow has employed secrecy, disinformation and blatant denials of the truth. Russian soldiers without identifying insignia (dubbed “little green men” in the press) were deployed to Crimea in February 2014. The soldiers were sent to occupy strategic locations throughout the peninsula in advance of the referendum held there as part of the process of Russia annexing Crimea.

Although they were quickly identified by external observers as Russian based on their uniforms and equipment, Putin continually denied any involvement, claiming that anyone could pick up such items in shops. Only in April 2014, when it was clear that the operation in Crimea had been successfully completed and, crucially, was popular back home, was Putin willing to acknowledge that the anonymous soldiers in Crimea were indeed Russian armed forces.

But Putin and other leading Russian officials have gone to great lengths to maintain a series of fictions concerning Moscow’s intervention in the Donbas region of eastern Ukraine, which enjoys far less support in Russian society.

For example, one such fiction is that Russian troops fighting in Ukraine are volunteers, who have taken leaves of absence from their military duties to support the cause of the separatists. Besides the almost comical idea of soldiers going on holiday to fight, this conceals the much darker truth that these young men have been sent to war and then disowned by their government. 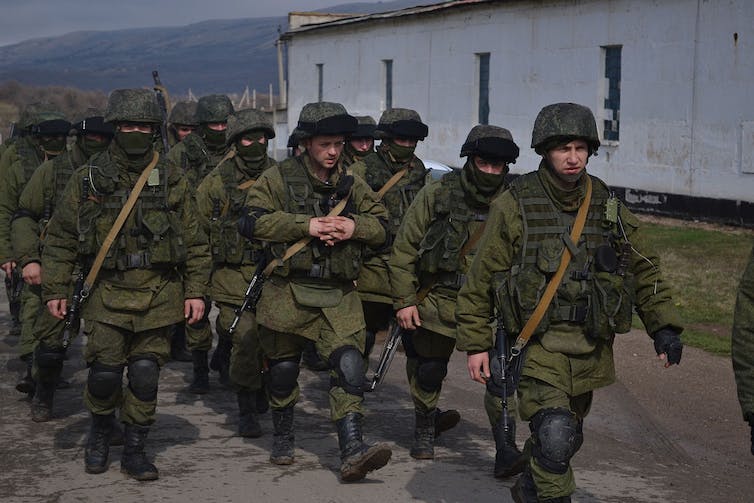 These ‘little green men’ were deployed to Crimea, but the deaths of other Russian troops in eastern Ukraine have gone unacknowledged.Anton Holoborodko, CC BY-SA

Since the start of the conflict in the spring of 2014, both Russian and Western media have carried interviews with Russian soldiers captured during the fighting in Ukraine. These soldiers have confirmed that they were on active duty at the time of their capture, acting under orders from their commanders. The Kremlin continues to deny their claims, despite the testimony from soldiers’ families that their sons and brothers were bribed, tricked or coerced into going to war.

Another fiction is that the Russian soldiers fighting in the Donbas are coming through this experience unscathed. As in all wars, there are casualties among the combatant forces, but Moscow is making great efforts to prevent this knowledge from coming to the attention of the Russian public. In May 2015 Putin signed a decree making the deaths of Russian soldiers in peacetime a state secret. Secrecy also surrounds the burials of Russians killed in Ukraine, which are not acknowledged by Russian national state media. Local journalists and those who work for Russia’s independent, internet television channel Dozhd, who have reported on these stories, have been threatened and attacked in efforts to intimidate them into silence.

Putin has good reason to fear the consequences of public anger, especially when it is inflamed by the mistreatment of those serving in the armed forces. This was the very issue that motivated thousands of middle-aged women to band together during the 1980s to create a network of civil society groups known as Committees of Soldiers’ Mothers. Over the years these committees have advised countless young men and their families on legal ways to avoid conscription, and by doing this have undermined Russia’s ability to rely on compulsory service as the main means of staffing its military.

Under pressure from public opinion, the Ministry of Defence has steadily cut the period of conscription, from 24 months down to just 12 months, no longer deploys conscripts in conflict zones, and has no choice but to accelerate the introduction of voluntary service, which is controversial within the senior ranks of the armed forces. The Committees of Soldiers Mothers are at the forefront of the grassroots campaign to demand an honest account of Russia’s involvement in Ukraine, something that puts Putin in an increasingly uncomfortable position.