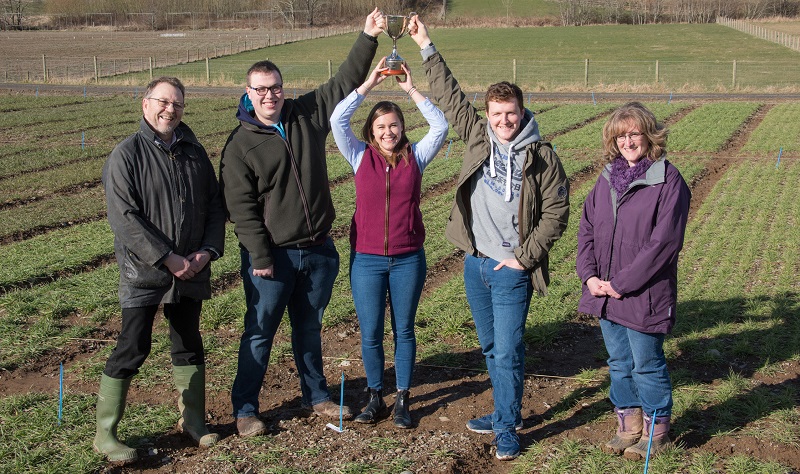 A team of students from Aberystwyth University’s Institute of Biological, Environmental and Rural Sciences (IBERS) has defeated 13 other university and college teams to lift the 2017 NIAB Agronomy Cup.

The competition, which has been running since 2012, is open to agriculture and crop science students from universities and colleges from across the UK.

This is the first time the cup has been won by a team from outside of England.

Professor Mike Gooding, Director of IBERS said: “I am delighted that the IBERS team has won this prestigious cup, highlighting the cereal growing expertise they are developing as part of the agricultural courses here at Aberystwyth.”

Dr Irene Griffiths from IBERS said: “The teams were briefed to make input decisions for effective and productive growing of the winter wheat variety KWS Siskin.”

“The students grow wheat and barley trial plots at IBERS’ Gogerddan campus just outside Aberystwyth as part of their degree course, but for the IBERS team the competition meant a 170 mile round trip to field walk competition plots on a NIAB field trials site at Callow trials centre, near Hereford.”

“This emphasised the importance of basing recommendations on field observations and local conditions.”

NIAB TAG’s national trials co-ordinator Ian Midgley said: “Aberystwyth University came close to winning in 2016, only finishing second because of a higher fungicide spend, and were determined to take the trophy this time.”

“Their approach was to be thoroughly prepared before making the final recommendation - taking note of all the site information provided by NIAB staff, made good use of plot visits to our site at Hereford, identifying the diseases present and understanding the strengths and weaknesses of the competition variety.”

“The team asked many questions, clearly understood the terminology used, and the basics of wheat agronomy, and above all wanted to learn. It definitely paid off.”

Captain David Casebow described the reasoning behind the IBERS team’s technical recommendations in line with the different stages of growth in the crop: “Septoria was present in the crop when we made our first site visit to Hereford in March.

“By applying Bravo 500 (ai chlorothalonil) at the T0 and T1 timings we wanted to slow the spread of the disease, with Ignite (ai epoxiconazole) at T1 lowering the risk of yellow rust occurring.”

“With KWS Siskin’s lodging resistance score of 6 we applied a full rate chlormequat at T1 and, as we weren’t aiming for the milling premium, we opted out of extra nitrogen.”

“The crop was relatively clean by the April visit, although there was plenty of yellow rust and Septoria in the surrounding plots, so the team dropped the T2 Adexar (ai epoxiconazole + fluxapyroxad) rate to three-quarters.”

“We then recommended a T3 fungicide as KWS Siskin has some susceptibility to fusarium and other ear diseases, but chose a three quarter rate Folicur (ai tebuconazole) to keep the costs down,” said David.