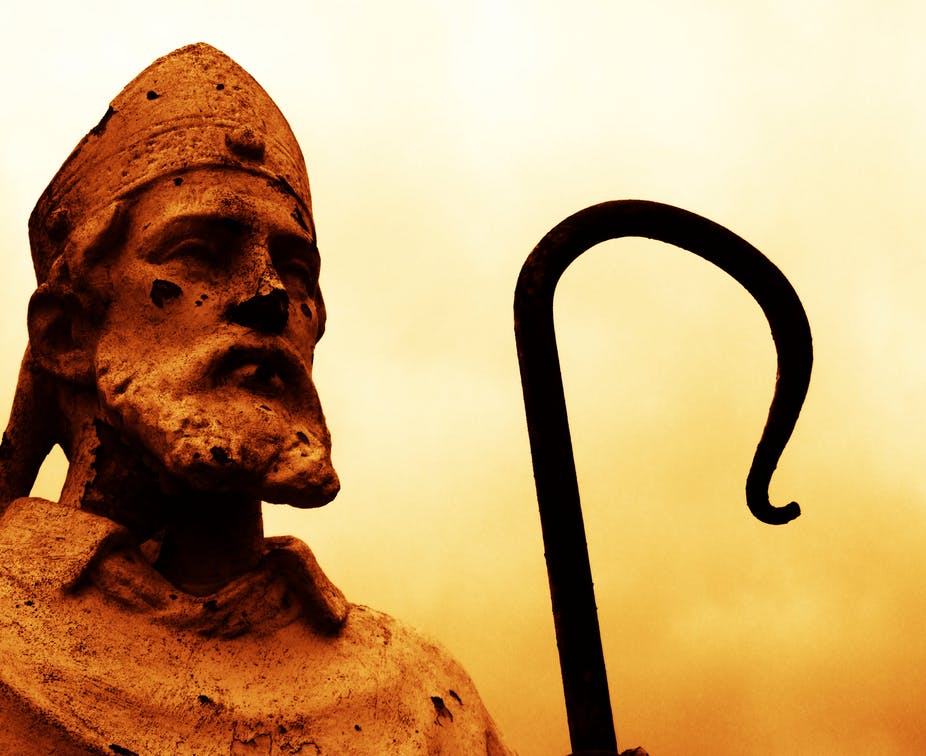 I wandered the streets of Galway, on St Patrick’s Day 2002, wearing a t-shirt which stated “St Patrick: he’s Welsh, you know”. It was intended, and received, as friendly banter, in the context of a resounding Irish victory over Wales in the Six Nations rugby tournament a fortnight previously. But is it true?

The answer should be pretty straightforward. After all, Patrick tells us, in one of the two Latin works of his that have survived, where he was from: a town named Banna Venta Berniae. Unfortunately, we don’t know where that was, except that it was somewhere in Britain. As he was captured there by Irish raiders, it must have been reasonably close to the west coast of Britain. So it is quite possibly, but by no means necessarily, somewhere in Wales.

Perhaps its precise location doesn’t really matter. In Patrick’s lifetime (some time in the fifth century AD), Wales, as we know it, did not exist. The inhabitants of the various kingdoms which made up the geographical area which we now call Wales called themselves “Britons”, as indeed did many other people in the part of Britain south of Hadrian’s Wall – the old Roman province of Britannia.

But those Britons who spoke the British Celtic language known as Brittonic (the ancestor of Welsh, Cornish and Breton) began, in the same century, to use another name for themselves?, Combrogī – “fellow countrymen”. This term is the ancestor of the English place name Cumbria, and of the word the Welsh use today to describe themselves: Cymry (in the Middle Ages, this term was also used for the country of Wales, which is now spelled Cymru). Whether or not this term was in use in the fifth century, however, is impossible to say.

By this time, Germanic-speaking kingdoms were forming in the south and east of the island of Britain. They were the forerunners of what historian, and later saint, Bede, in the eighth century would call the “gens Anglorum”, “the English people”. These people were not Britons, either to themselves, or to their neighbours to the west, who, then and now, called them “Saxons” (Welsh “Saeson”, Gaelic “Sasanaigh”). They, in turn, called the Britons, “Wealas”, the origin of the word “Welsh”. So from a contemporary English point of view at least, Patrick would have been Welsh.

It has been claimed, by scholars both medieval and modern, that St Patrick spoke Brittonic. We know that he could write good Latin, but he called it lingua aliena, “a foreign language”. It was not his native tongue, but, as a high status language with a venerable literary tradition, and the lingua franca of the church, it was the obvious choice for him to write in. Without any further evidence, we could quite confidently deduce that Brittonic would be his native tongue (Irish, English and Pictish are much less likely candidates for a native of western Britannia at this time). But perhaps we can go further than this.

In the seventh century, an Irish monk named Muirchú wrote a Life of St Patrick in Latin. In it, the few historical facts about Patrick recoverable from his own writings are almost completely obscured by the numerous miracles that were de rigeur in medieval writings on the lives of saints, and the blatant propaganda of the ambitious church of Armagh, which was in the process of appropriating Patrick for itself.

Nonetheless, Muirchú records verbatim two of Patrick’s sayings: “modebroth” and “gra(t)zacham”. Muirchú does not tell us what language these utterances are in, but both were interpreted as being in Brittonic by a ninth-century Irish lexicographer, Cormac mac Cúilennáin, the bishop-king of Cashel.

Modebroth, he claimed, is a corrupt form of the Welsh “myn duw brawd” – “by the god of judgement”. This could be right, but gra(t)zacham derives ultimately from the Latin “gratias agam” (“let me give thanks”), or gratias agamus (“let us give thanks”).

Cormac seems to have interpreted it as Brittonic on the eminently reasonable ground that Patrick was a Briton, and that anything he is reported to have said which was not obviously Irish or Latin must have been Brittonic. So if he was wrong about gra(t)zacham, he may have been wrong about modebroth, too, which may, in fact, have been an Irish phrase meaning “divine judgment”, subjected to the sort of modification common in religious oaths (see, for instance, the English “gosh” and “jeepers” instead of “God” and “Jesus”). At any rate, there is no very compelling reason to believe that Muirchú really did have access to the exact words which Patrick had uttered 200 years previously.

So what’s the verdict? Patrick may very well have been born in present-day Wales. He was certainly born in the west of Britain. He may have thought of himself as a Cymro, and the English would doubtless have classified him as Welsh. His first language was almost certainly the ancestor of Welsh. And yet, we know that he chose Ireland over the land of his birth. He is a footnote in the history of Wales, but utterly central to that of Ireland.

In the game of rugby which inspired my St Patrick’s Day t-shirt, one of the (many) try scorers for Ireland was a certain Ronán O’Gara, born San Diego, California. When it comes to identity, place of birth isn’t everything.