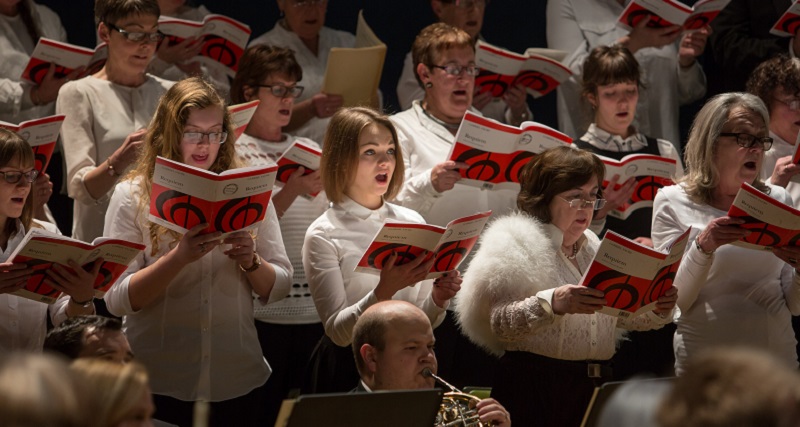 Sir Karl Jenkins’ Cantata Memoria: For the Children, composed to commemorate the 50th anniversary of the Aberfan tragedy in 2016, will be performed at Aberystwyth Arts Centre on Saturday 21 April 2018, after being postponed from 3 March due to snow.

A central part will also be played by young singers from local schools, including the Penglais pupils of Elinor Powell’s ‘Sgarmangels’ and younger pupils from St Padarn’s.

The composition commemorates the tragic events of 1966 when a coal tip engulfed Pantglas primary school in the village of Aberfan, together with some nearby houses, killing 116 children and 28 adults.

Half a century on, composer Sir Karl Jenkins and poet and Aberystwyth University alumna Professor Mererid Hopwood were commissioned by S4C to create this commemorative choral work.

Sir Karl Jenkins has described composing the work as his most emotional experience as a composer: “When the word Aberfan is mentioned, no further explanation is necessary; its eternal effect is encapsulated in its name. What resonates, of course, is that the great majority of victims were children. Dealing with a subject that lies so deep in the soul of the Welsh was both a harrowing and uplifting experience.”

Cantata Memoria: For the Children premiered at Wales Millennium Centre in Cardiff in October 2016.

Eighteen months later, in one of the first performances in Wales since the BBC premiere, Cantata Memoria will be at the Aberystwyth Arts Centre on Saturday 21 April.

The performance will be conducted by Dr David Russell Hulme, Director of Music at Aberystwyth University: “This is a big work - complex and demanding. It made a huge impact at its Cardiff premiere and I’m sure it will do so here.”