Aberystwyth cheerleaders all set for an American odyssey 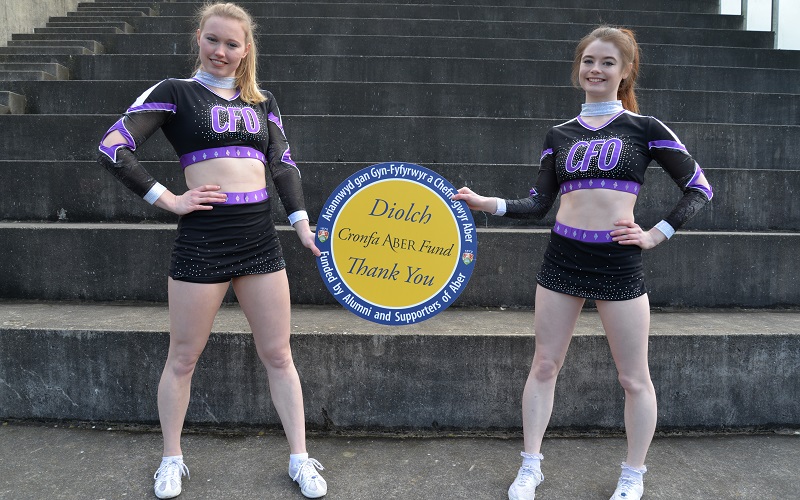 Chris Welter (Left) and Imogen Wild have been selected to compete at the United States All Star Federation (USASF) Cheerleading and Dance World Championships which take place in Florida.

Aberystwyth University students will take on the best in the world of cheerleading when they head to the USA next week.

Aberystwyth Tarannau Cheerleaders members Imogen Wild and Chris Welter have been selected to compete at the United States All Star Federation (USASF) Cheerleading and Dance World Championships which take place in Florida from 22 April until 2 May 2018.

Imogen and Chris are proficient gymnasts and members of the elite Telford Cheerforce Odyssey team, who have qualified for the World Championships for the first time this year.

They will compete with Cheerforce Odyssey in the International Open Small Co-ed Team category against the best cheerleading teams in the world.

Chris is studying Film, Theatre and Television, said: “Both Imogen and I were competing in gymnastics before coming to Aberystwyth University. We already had the tumbling and stunting skills so it was a natural progression to join Tarannau and then compete on a more advanced level with Cheerforce Odyssey.”

Every three weeks the girls travel to Telford for a weekend training session. They also have a daily two hour training regime which has to be filmed as proof that they are keeping up to speed on new skills.

Imogen, who is studying Environmental Earth Sciences, said: “It’s a huge commitment but because I have to structure my day around my studies and training I feel that I get more done. It has all the benefits of any sport and is physically challenging. It’s a total stress reliever from studying and it makes me sleep better.”

Not only is cheerleading one the UK’s fastest growing sports, it is also classified as the most dangerous of contact sports.

The International Olympic Committee (IOC) has provisionally approved cheerleading as a sport and is providing some funds to aid the sports’ development for the next three years. At the end of that period, the IOC will decide whether to fully accept the sport into the Olympics.

Imogen, who is from the Isle of Man, and Chris from Luxembourg have been coaching Tarannau for the past 2 years.

The club includes a variety of dance teams and stunt groups that have been very successful in competitions at Wales and UK levels.

They hope that their experiences at the elite championships will benefit the team and encourage others to join up.

Imogen said: “We spend a lot of time coaching the Tarannau, it’s a way of life. It’s a good way of introducing people who don’t really like sport to keep fit. Cheerleading is varied and not repetitive like swimming or running, you have to completely trust your team-mates to be there for you. It improves health and happiness because everybody bonds and finishes the sessions with a smile.”

Chris added: “I would like to continue coaching after my competitive days. It’s been brilliant for my Film, Theatre, and Television degree as it makes you very aware of your body and really helps with the warming up exercises for dance and performance.”

Imogen and Chris’ participation in the cheerleading world championships has been made possible thanks for financial support from Aber Fund, the giving programme for alumni and friends of the University that supports projects that directly enrich student experience.

Aber Fund has already helped them reach a high level in their chosen sport through various projects and is funding their travel costs to Florida.

Hayley Goddard, Individual Giving Officer said: “We are very pleased that the Aber Fund can support Chris and Imogen to compete at such a high level. We cannot thank our alumni and supporters enough for making this possible and giving them both an unique opportunity. We wish them the very best of luck and look forward to seeing the impact that their experience and enthusiasm will have on future aspiring Aber cheerleaders.”

Jessica Williams, NUS Opportunities Officer at Aberystwyth Students’ Union said: “It’s a huge opportunity for our students to compete in such a high calibre competition. Hopefully our donation will help the girls’ fulfil their ambitions.”