What lurks inside a fatberg? 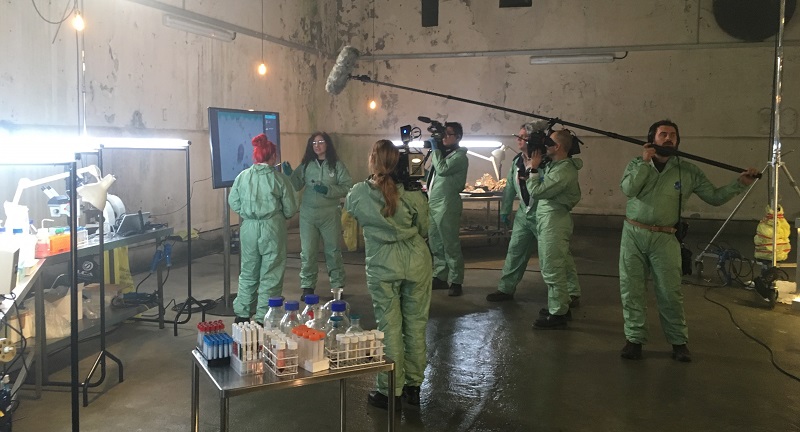 Professor Jo Hamilton (second from left) discussing DNA extraction of a fatberg in Blackfriars sewer in central London during filming for Fatberg Autopsy.

Parasitology experts from Aberystwyth University will feature in Channel 4’s ‘Fatberg Autopsy: Secrets of the Sewers’, which is broadcast at 9pm on Tuesday 24 April 2018.

Professor Jo Hamilton and Dr Justin Pachebat from the Institute of Biological, Environmental and Rural Sciences (IBERS) were commissioned by the BBC Science Unit to undertake a molecular analysis of a fatberg and look for parasites and bacteria.

Fatbergs are made up of oil and grease poured down drains, mixed with human sewage and flushed personal items that fail to disintegrate. They form blockages in sewerage systems and have been making the news in recent months.

Justin Pachebat said: “Three bucket loads of a fatberg from sewers under London’s South Bank  were delivered to us in Aberystwyth for the initial analysis. The project was fascinating and we soon realised that there were several biological ‘layers’ for us to work on.”

“We found Campylobacter, E. coli andListeria - species which are a common cause of food poisoning in humans - and some antibiotic resistant strains of bacteria.

“We also found a number of personal ‘items’ within the fatberg including cotton buds and a female condom. Of course, as curious scientists, we plated these out too, checked for bacterial growth and found some interesting colonies.”

Jo Hamilton noted: “To our surprise, our fatberg analysis also revealed some parasite eggs which could potentially be one of two worm species, Alaria alata or Fasciola hepatica.

“These are interesting as they can infect both animals and humans, although in our case they were almost certainly from an animal infection. We also found nematode worms which were most likely non-parasitic.”

The IBERS team together with scientists from other universities later undertook further analysis on site at a sewage works in Stratford in central London.

A very large fatberg was discovered by workers in the Whitechapel sewer in London in September 2017 and nicknamed the Beast.

The Beast weighed 130 tons, and stretched 820 feet, almost the length of London Bridge. Part of this fatberg is now on public display at the Museum of London.

Fatberg Autopsy: Secret of the Sewers