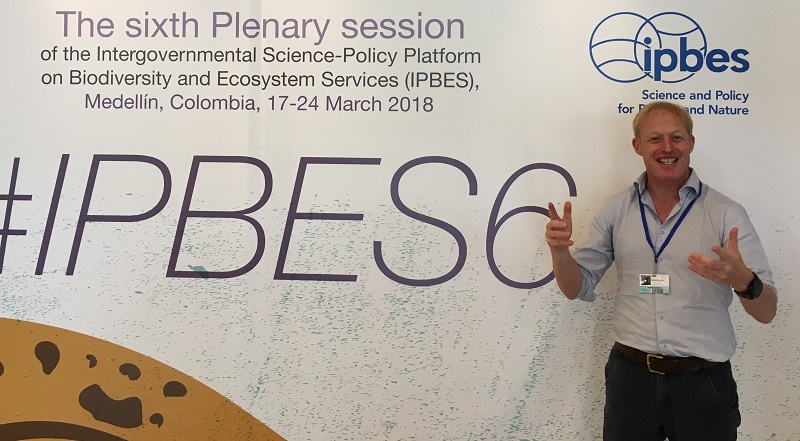 Economic growth across Europe and Central Asia has contributed to biodiversity loss, which in turn seriously threatens people’s quality of life, according to an international study co-led by an Aberystwyth University academic.

Professor Mike Christie from Aberystwyth Business School co-led the study for the Intergovernmental Science-Policy Platform on Biodiversity and Ecosystem Services (IPBES), and the findings were presented at a conference in Medellin, Columbia on Friday 23 March 2018.

According to research work undertaken for IPBES by Professor Christie and colleagues, the populations of 42% of known terrestrial animal and plant species and 26% of known marine species in Europe and Central Asia have declined over the last decade.

The continuing decline in biodiversity has had negative consequences for the delivery of the many benefits that nature contributes to people’s well-being, including pollination of crops, the regulation of freshwater quality, flood prevention, soil formation and the regulation of climates.

These regulating services can have higher economic and cultural values than, for example, the food produced on agricultural land.

IPBES was established in 2012 as an independent body, comprising 130 United Nations Member States, along with numerous NGOs and civil society groups.

It aims to provide a robust evidence base for better policy through science, for the conservation and sustainable use of biodiversity, long-term human well-being and sustainable development.

Professor Christie, Director of Research for the Institute of Business and Law at Aberystwyth University, said: “Economies and the quality of people’s life are at risk if we fail to protect the World’s biodiversity”.

“The IPBES assessment also explores how the future might unfold using scenarios and models. These models indicate that if we continue to act the way we have in the past (termed the Business-As-Usual scenario), for example, by exploiting natural resources and polluting our environment, we are likely to fail to meet many Sustainable Development Goals by 2030 and beyond. This will have severe consequences for our, and future generations’, livelihoods, economies and quality of life.”

However, the report also highlights that there are things people can do to protect nature and its benefits.

Professor Christie said: “We need to take the pressure off biodiversity by, for example, eating a more balanced diet with less meat and reducing food waste. We need to drastically cut fossil-fuel use by using public transport or electric vehicles and ensuring our homes are well insulated. We can also create ‘wild’ areas in our gardens that will provide food for insects and birds.”

IPBES hopes to do for biodiversity what the Intergovernmental Panel on Climate Change (IPCC) has done for climate change. It provides policymakers with objective scientific assessments about the state of knowledge regarding the planet’s biodiversity, ecosystems and the benefits they provide to people.

Although the IPBES report does not provide specific recommendations for UK policy, the report’s findings can be used to help shape a number of post-Brexit policies.

Professor Christie added: “The report provides strong evidence that future agricultural support in the UK should focus on helping farmers manage the biodiversity on their land to enhance benefits to people, including enhancing water quality, managing flood risk, and storing carbon”.

Professor Christie further suggests that: “The evidence in the IPBES report very much aligns with the objectives of the ‘Well-being of Future Generations (Wales) Act’, which aims to improve the social, economic, environmental and cultural well-being of people in Wales. As such, Wales is uniquely placed to be a global leader in using its natural resources to promote economic development and improve people’s quality of life.”

The IPBES report was released on Friday 23 March 2018 at a launch event in Medellin, Colombia, where it was approved by representatives from 130 countries.

The evidence in the report will help these countries make more informed decisions on ways in which they can manage their precious natural resources to develop their economies and improve people’s quality of life.