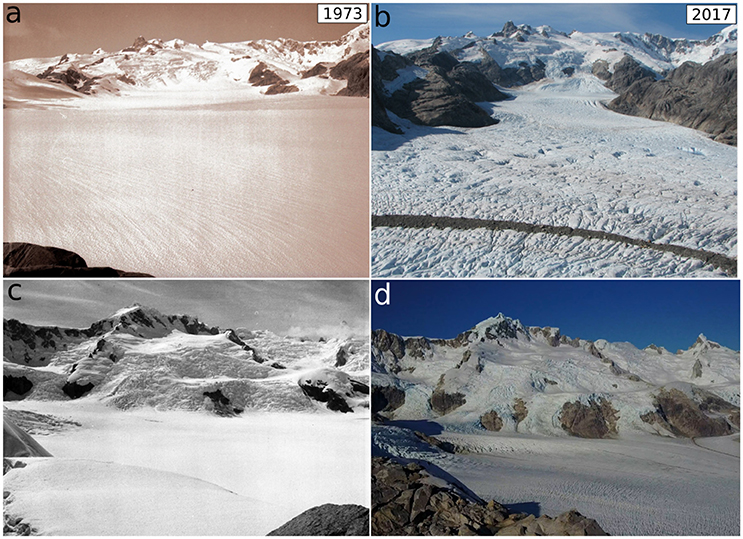 Photographs taken during the British Joint Forces Expedition in 1973 (left) and again in 2017 demonstrate changes in surface elevation of the Benito Glacier. Credit: Martin Sessions.

New research shows that the Benito Glacier in northern Patagonia has thinned by 133 metres in the past 44 years.

The study was carried out by a team of international researchers, including glaciologists from the Department of Geography and Earth Sciences at Aberystwyth University.

They say the northern and southern Patagonian ice fields are two of the most sensitive ice masses on Earth to climate change and could become a leading contributor to rising sea-levels caused by melting mountain glaciers and icecaps.

The team’s conclusions are based on detailed analysis of the surface lowering of the Benito Glacier between 1973 and 2017.

The starting point for the research was a ground survey surface elevation profile of the glacier carried out by the British Joint Forces Expedition in 1973, of which Martin Sessions – one of the co-authors on the study – was the scientific leader.

Martin, his son Mark and researchers from Aberystwyth University returned to Benito in April 2017 to retrace the surface profiles and carry out a new survey using the latest GPS technology.

The 2017 survey showed that in the intervening period of 44 years, the surface level of the Benito Glacier lowered and thinned by 133 metres.

The findings were published in May 2018 in the open-access, peer-reviewed journal Frontiers in Earth Science: Rapid Surface Lowering of Benito Glacier, Northern Patagonian Icefield.

Professor Alun Hubbard, one of the researchers from Aberystwyth University’s Centre for Glaciology said: “This study highlights the exceptional rates of ice thinning evident in Patagonia.  I first visited the Patagonian ice fields 20 years ago, leading the first unsupported north to south crossing, summiting a number of previously unclimbed peaks and carrying out a series of geophysical measurements.  Since that first expedition, glacier ice loss has been unprecedented across the region and, as our new paper reveals, has become a major contributor to global sea-level rise.”

Modelling projections into the latter twenty-first century indicate that melting will further increase and snowfall will decrease over the northern Patagonian ice field as temperatures continue to rise.

Dr Ryan Wilson, an Associate Lecturer at the Aberystwyth University’s Department of Geography and Earth Sciences, said: “The team found that average annual air temperatures in the region have increased at a rate of 0.2◦C per decade since 1960. Whilst precipitation volume remained constant between 1970 and 2000, warmer air temperatures will have increased the fraction of precipitation falling as rain rather than snow, reducing the accumulation rates on the surface of the glacier and increasing melt.

“There was a slight cooling in temperature and increased snowfall between 2000 and 2013 which appears to have rapidly reduced rates of surface lowering. However, in the last four years (2013–2017), rates of surface lowering increased again - more than doubling in comparison to the 1973–2000 period and quadrupling in comparison to the 2000-2013 period.”

Rapid Surface Lowering of Benito Glacier, Northern Patagonian Icefield is published in full in the Frontiers in Earth Science journal.