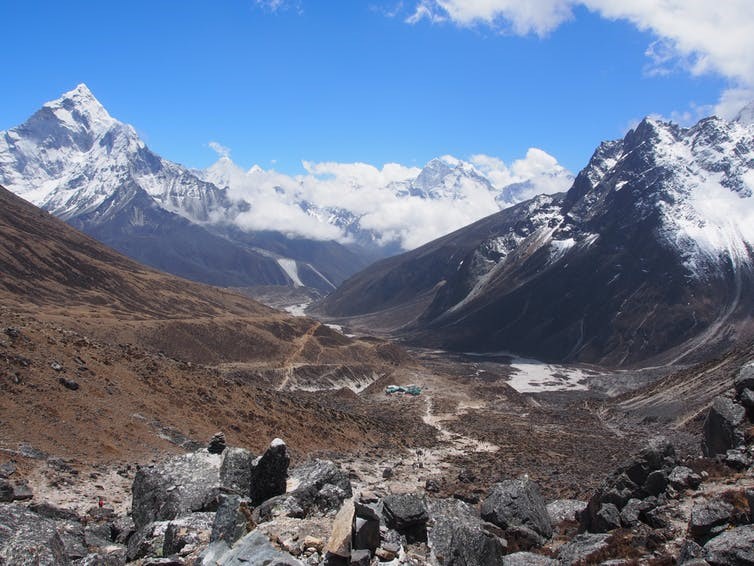 Writing in The Conversation, Katie Miles and Professor Bryn Hubbard from the Department of Geography and Earth Sciences explain how they are trying to understand the secrets of Mount Everest's glaciers:

For nearly 100 years, Mount Everest has been a source of fascination for explorers and researchers alike. While the former have been determined to conquer “goddess mother of the world” – as it is known in Tibet – the latter have worked to uncover the secrets that lie beneath its surface.

Our research team is no different. We are the first group trying to develop understanding of the glaciers on the flanks of Everest by drilling deep into their interior.

We are particularly interested in Khumbu Glacier, the highest glacier in the world and one of the largest in the region. Its source is the Western Cwm of Mount Everest, and the glacier flows down the mountain’s southern flanks, from an elevation of around 7,000 metres down to 4,900 metres above sea level at its terminus (the “end”).

Though we know a lot about its surface, at present we know just about nothing about the inside of Khumbu. Nothing is known about the temperature of the ice deeper than around 20 metres beneath the surface, for example, nor about how the ice moves (“deforms”) at depth.

Khumbu is covered with a debris layer (which varies in thickness by up to four metres) that affects how the surface melts, and produces a complex topography hosting large ponds and steep ice cliffs. Satellite observations have helped us to understand the surface of high-elevation debris-covered glaciers like Khumbu, but the difficult terrain makes it very hard to investigate anything below that surface. Yet this is where the processes of glacier movement originate.

Scientists have done plenty of ice drilling in the past, notably into the Antarctic and Greenland ice sheets. However this is a very different kind of investigation. The glaciers of the Himalayas and Andes are physically distinctive, and supply water to millions of people. It is important to learn from Greenland and Antarctica, – where we are finding out how melting ice sheets will contribute to rising sea levels, for example – but there we are answering different questions that relate to things such as rapid ice motion and the disintegration of floating ice shelves. With the glaciers we are still working on obtaining fairly basic information which has the capacity to make substantial improvements to model accuracy, and our understanding of how these glaciers are being, and will be, affected by climate change.

So how does one break into a glacier? To drill a hole into rock you break it up mechanically. But because ice has a far lower melting point, it is possible to melt boreholes through it. To do this, we use hot, pressurised water.

Conveniently, there is a pre-existing assembly to supply hot water under pressure – in car washes. We’ve been using these for over two decades now to drill into ice, but our latest collaboration with manufacturer Kärcher – which we are now testing at Khumbu – involves a few minor alterations to enable sufficient hot water to be pressurised for drilling higher (up to 6,000 metres above sea level is envisioned) and possibly deeper than before. Indeed, we are very pleased to reveal that our recent fieldwork at Khumbu has resulted in a borehole being drilled to a depth of about 190 metres below the surface.

Even without installing experiments, just drilling the borehole tells us something about the glacier. For example, if the water jet progresses smoothly to its base then we know the ice is uniform and largely debris-free. If drilling is interrupted, then we have hit an obstacle – likely rocks being transported within the ice. In 2017, we hit a layer like this some 12 times at one particular location and eventually had to give up drilling at that site. Yet this spatially-extensive blockage usefully revealed that the site was carrying a thick layer of debris deep within the ice.

Once the hole has been opened up, we take a video image – using an optical televiewer adapted from oil industry use by Robertson Geologging – of its interior to investigate the glacier’s internal structure. We then install various probes that provide data for several months to years. These include ice temperature, internal deformation, water presence measurements, and ice-bed contact pressure.

All of this information is crucial to determine and model how these kinds of glaciers move and melt. Recent studies have found that the melt rate and water contribution of high-elevation glaciers are currently increasing, because atmospheric warming is even stronger in mountain regions. However, a threshold will be reached where there is too little glacial mass remaining, and the glacial contribution to rivers will decrease rapidly – possibly within the next few decades for a large number of glaciers. This is particularly significant in the Himalayas because meltwater from glaciers such as Khumbu contributes to rivers such as the Brahmaputra and the Ganges, which provide water to billions of people in the foothills of the Himalaya.

Once we have all the temperature and tilt data, we will be able to tell how fast, and the processes by which, the glacier is moving. Then we can feed this information into state-of-the-art computer models of glacier behaviour to predict more accurately how these societally critical glaciers will respond as air temperatures continue to rise.

This is a big and difficult issue to address and it will take time. Even once drilled and imaged, our borehole experiments take several months to settle and run. However, we are confident that these data, when available, will change how the world sees its highest glacier.