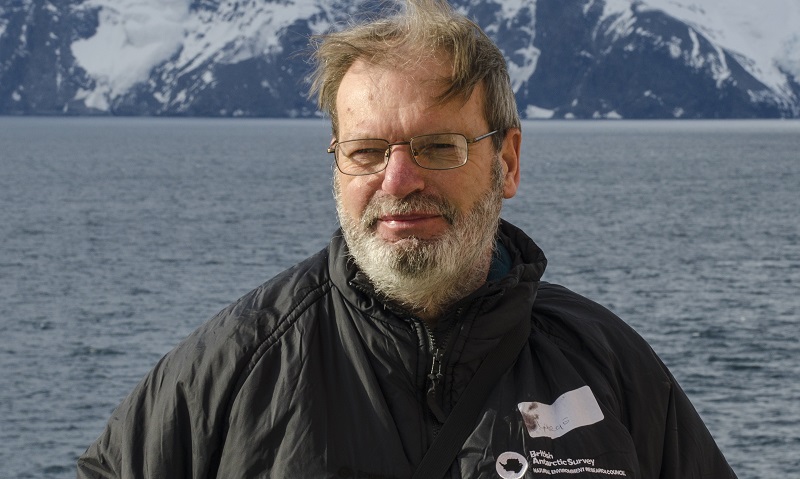 As well as the SCAR Medal, Professor Michael Hambrey has been awarded two Polar Medals and a ridge of cliffs in Antarctica have been named in his honour.

An Aberystwyth University glaciologist has been recognised for his excellence in Antarctic and Southern Ocean research, and outstanding service to the international Antarctic community.

A former Director of the internationally recognised Centre for Glaciology at Aberystwyth University, Professor Hambrey is a two-time winner of the Polar Medal (1989 and 2012).

His contribution to Antarctic research has also been recognised with the naming of ‘Hambrey Cliffs’ on James Ross Island in his honour in 2006.

Commenting on the award, Professor Hambrey said: “I am delighted and honoured to receive the 2018 SCAR Medal for Excellence in Antarctic Research. I have been fortunate to investigate modern glaciers in many parts of the world, and be able to use the knowledge gained to interpret older glacial sequences in Antarctica and elsewhere. This work could not have been undertaken without the wonderful collaboration I have had from colleagues around the world, notably the Antarctic community, with whom it has been a pleasure to work. I thank them for their contribution, and the SCAR Executive Committee in making this award."

The award recognises Professor Hambrey’s ‘distinctive insights into the field of glaciology and of particular note the application of our understanding of modern glacial processes to interpreting ancient glacial sequences’.

His work has been acknowledged as ‘often the first thorough analysis in a particular sector, but if not, invariably ground-breaking’.

Selection for the SCAR Medal is based on a person's outstanding contributions to knowledge and the impact of their work on understanding the Antarctic region, the linkages between Antarctica and the Earth system, and/or observations of and from Antarctica.

The medal will be awarded to Professor Hambrey at the XXXV SCAR Meeting, during the Polar2018 Conference Dinner in Davos on 21 June 2018.

The Scientific Committee on Antarctic Research