Art historian, exhibition curator and museum director Professor Ann Sumner has been honoured as a Fellow of Aberystwyth University.

Professor Ann Sumner serves as an external consultant on the University’s School of Art Museum and Gallery Advisory Board.

Educated at the Courtauld Institute of Art, University of London, she undertook her PhD at Newnham College, Cambridge.

She began her career at the National Portrait Gallery in London, and held curatorial positions at the Whitworth Art Gallery, University of Manchester, Dulwich Picture Gallery, Harewood House Trust and the Holburne Museum, University of Bath. She was recently appointed Chair of the Methodist Modern Art Collection.

Professor Ann Sumner was presented by Professor Robert Meyrick, Head of the School of Art and Keeper of Art on Tuesday 17 July 2018.  The full conferral presentation is available below, in the language in which it was delivered.

Chancellor, Vice-Chancellor, prospective graduates and supporters.  It is an honour and a privilege to present Ann Sumner as a Fellow of Aberystwyth University.

As an art historian, exhibition curator and museum director, Ann has been associated with many of the UK’s leading cultural institutions.  As an early career researcher she worked at the National Portrait Gallery in London and Dulwich Picture Gallery where she began as a specialist of seventeenth-century British painting and miniature painting.

In an advisory capacity, Ann is Historic Collections Adviser to the Harewood House Trust and sits on the Steering Committee for the Tercentenary of furniture-maker Thomas Chippendale. She is also part of the Steering Group marking the Centenary of Mitzi Cunliffe, an American sculptor in Manchester. As well as advising Derby Museums Trust on their Joseph Wright of Derby displays, she is newly appointed Chair of the Methodist Modern Art Collection. Importantly for Aberystwyth University, Ann serves as external consultant on the School of Art Museum and Gallery Advisory Board.

Ann studied History of Art at the University of London’s Courtauld Institute and gained a PhD in History from Newnham College, Cambridge. Her research raises awareness of once influential now forgotten or marginalised artists and collectors, and enriches our understanding and appreciation of European art history.

Ann’s first major exhibition for the Holburne at Bath marked the bicentenary of Thomas Gainsborough. One of her most significant research projects was for the National Museum of Wales exploring the work of pioneering eighteenth-century Welsh landscape painter Thomas Jones. Thomas Jones: An Artist Re-discovered toured to the Whitworth in Manchester and the National Gallery in London and was accompanied by a scholarly monograph published by Yale University Press.

At Cardiff, Ann made an important contribution to the history of art and art collecting in Wales. In 2007, she was co-curator of the Museum’s centenary exhibition Industry to Impressionism where she focused on the Davies Sisters of Gregynog as collectors of Impressionist paintings. With the National Gallery, London, she curated an exhibition and researched a monograph on French Impressionist painter Alfred Sisley and his time in England and Wales. A similar project followed on John Brett, A Pre-Raphaelite on the Shores of Wales. She is currently working on now little-known Welsh landscape painter Penry Williams.

Anyone who knows Ann, will know that aside from art history her great passion is lawn tennis. There have been times when the twain have met. In 2011, she curated for the Barber Institute a hugely successful exhibition Court on Canvas: Tennis in Art and just recently has completed for Routledge a chapter on International Tennis Art.

Through uncovering forgotten or marginalised artists and artworks, Ann offers a new appreciation of important figures, historical practices and artefacts and advances our understanding of the personal, professional and institutional forces that shape and maintain our artistic heritage. Rediscovering and re-evaluating, uncovering the past, piecing together a trail of clues, makes accessible work hitherto excluded from the canon due simply to a paucity of information or lack of exposure to the artists and collectors and their practices.

Today we celebrate Ann’s many and varied achievements as one of our foremost art historians and exhibition curators, and in particular mark her contribution to the history of Wales’ visual culture.

Chancellor, Vice-Chancellor, it is my absolute pleasure to present Ann Sumner to you as a Fellow of Aberystwyth University.

Nine individuals are being honoured by Aberystwyth University during the 2018 graduation ceremonies, which take place at the University’s Arts Centre from Tuesday 17 July until Friday 20 July.

One Honorary Doctorate will also be presented; recognising an individual who has been outstandingly successful in their field, or who has a long record of renowned research and publication.

Honorary Fellowships will be presented to:

Author and scholar the late Professor Meic Stephens was presented with an Honorary Fellowship of Aberystwyth University on Thursday 3 May 2018 at a special ceremony in Cardiff. Sadly, Professor Stephens died on Tuesday 3 July 2018.

An Honorary Doctorate will be presented to technology entrepreneur and software designer, John Thompson.

An Honorary Bachelor of Science Degree will be presented to retired Station Manager of Aberystwyth Fire Station, Eric Harries, who organised and led 50 humanitarian missions to Eastern Europe to help the innocent victims of war.

An Honorary Bachelor of Arts Degree will be awarded to Sue Jones-Davies, actress and singer, town councillor and former Mayor of Aberystwyth. 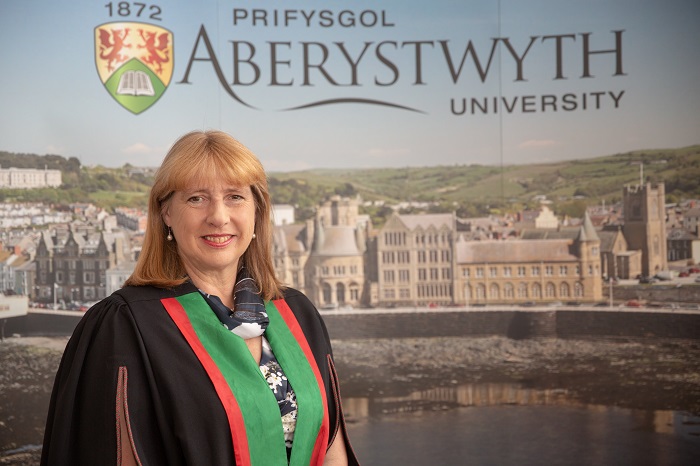