Awards for research projects on malaria and minority languages 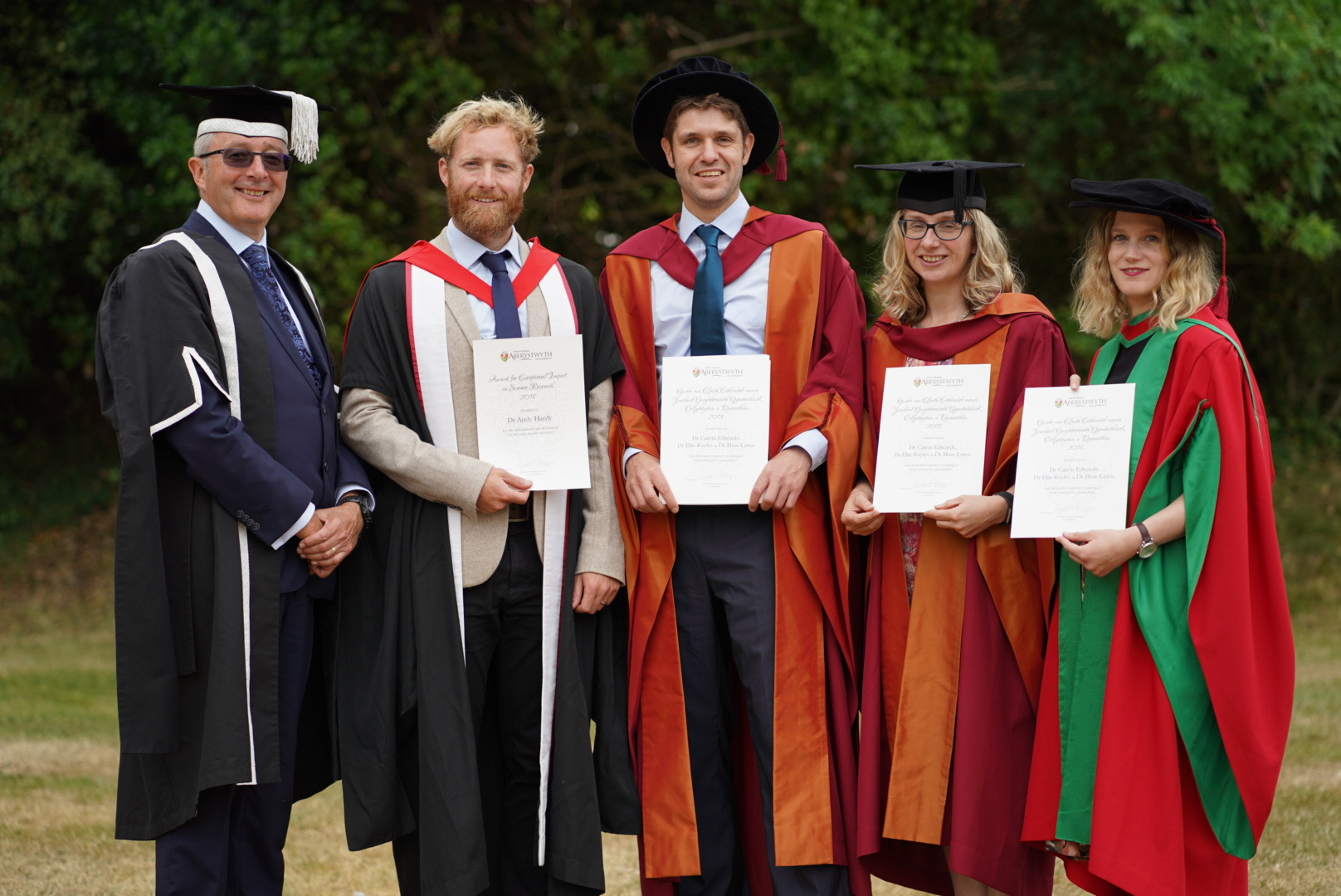 The winners of Aberystwyth University’s inaugural Awards for Exceptional Impact in Research are Dr Andy Hardy from the Department of Geography and Earth Sciences, and Dr Catrin Wyn Edwards, Dr Huw Lewis and Dr Elin Royles from the Department of International Politics, pictured here with Pro Vice-Chancellor Professor John Grattan.

Staff working on two pioneering research projects at Aberystwyth University have been selected for special recognition during Graduation Week 2018.

The Award for Exceptional Impact in Science Research was presented to Dr Andy Hardy from the Department of Geography and Earth Sciences for a project which is using drones to help eliminate malaria.

The Award for Exceptional Impact in Social Science, Arts and Humanities Research was presented to Dr Catrin Wyn Edwards, Dr Huw Lewis and Dr Elin Royles from the Department of International Politics for their work on informing contemporary policy on minority languages, including Welsh.

The awards have been established by the University’s Vice-Chancellor Professor Elizabeth Treasure to recognise the achievements of staff who demonstrably use their research for the wider benefit of society and the inaugural winners were honoured during Graduation on Friday 20 July 2018.

A lecturer in Remote Sensing and GPS at Aberystwyth, Dr Andy Hardy is leading a project on the island of Zanzibar using drones to map water bodies such as rivers, swamps and rice paddies where malaria-carrying mosquitoes breed and lay eggs.

The images from the drone are uploaded to a smartphone app enabling members of the local community to precisely identify where to put low-level toxicity larvicide and kill mosquito larvae at source.

Speaking about the project, Dr Hardy said: “This is a community-led intervention aimed at reducing the population of malarial carrying mosquitoes and thereby reducing malaria infection across the island, contributing to Zanzibar’s efforts to eliminate the disease once and for all. The hope is we can take this methodology and apply it across sub-Saharan Africa to have a real impact on malaria, which is one of the world’s biggest killers.”

The project is funded by the Innovative Vector control consortium, a not-for-profit company supported by the Bill and Melinda Gates Foundation, UK Aid and other organisations.

Dr Catrin Wyn Edwards, Dr Huw Lewis and Dr Elin Royles from the Department of International Politics are working together on a research programme on minority language revitalisation.

Senior Lecturer Dr Elin Royles said: “Responding to the worldwide decline in linguistic and cultural diversity is increasingly seen as a global challenge which is occupying the attention of various campaigners and policy makers. As part of our research work, we’ve worked with the University of Edinburg to set up a network bringing together a range of different academic scholars and policy practitioners. Our overall aim, based on those discussions, is to identify best practice and help inform policy makers not only in Wales but also in other countries involved in trying to promote minority languages.”

Lecturer Dr Huw Lewis said: “One of the big questions for us is to what extent are those who are involved in developing and formulating policies to revitalise minority languages are really taking account of the global changes in the way we live our lives today and the implications of these transformations for language promotion efforts.”

Dr Catrin Edwards, a lecturer in the Department of International Politics and an expert on the implications of international migration for minority lanuage communities, said: “Wales is an evident example of the efforts to respond to the global challenge of revitalising minority language, with the Welsh Government setting a target of realising a million Welsh speakers by 2050. Our work aims to identify lessons from research that can be fed into the work of policy makers both in Wales and the wider world.”

Find out more about the project in this short video:

Revitalise is a two-year project which is funded by the Arts and Humanities Research Council (AHRC).