Where is all the antimatter? 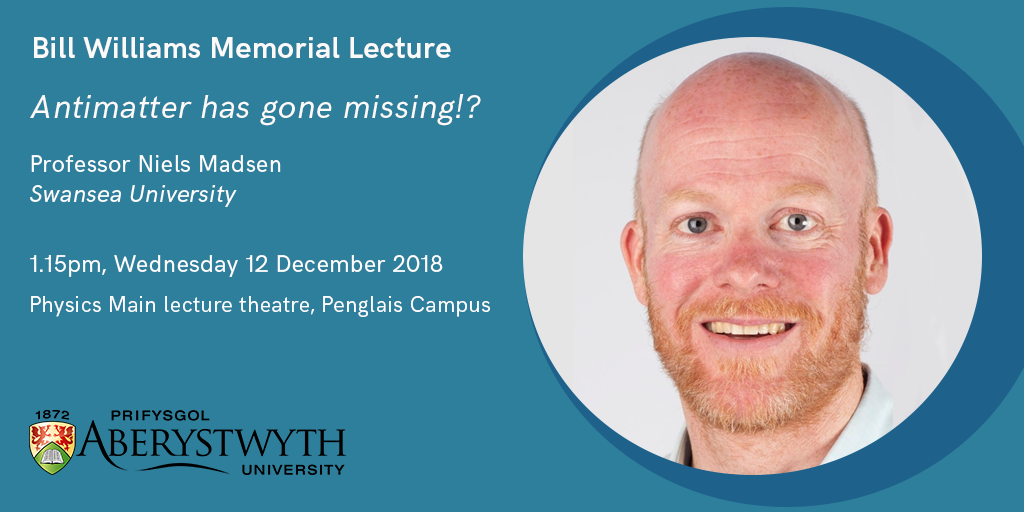 The lecture, entitled ‘Antimatter has gone missing!?’, will take place at 1.15pm on Wednesday 12 December in the Physics Main lecture theatre on Penglais Campus.

Professor Madsen explains the basis for the lecture: “It would be easy to lose something in a place as large as the Universe, but losing half of the Universe seems pushing most people's imagination - but that's exactly what appears to have happened to antimatter. We're convinced that a long time ago it filled half the Universe - but now it seems to be missing.  So what to do? Was Star Trek in vain - won't there be any antimatter to take us to the stars? Do we care? To help answer these questions we make antimatter ourselves at the world’s largest physics laboratory CERN in Switzerland. We'll discuss why and how and perhaps learn “who" took all the antimatter in the Universe.”

The annual Memorial Lecture was set up as a tribute to the late A.J.S “Bill” Williams MBE (1920-2016) who was renowned for his schools’ lecture series.

During his long career at Aberystwyth University from 1950-2011, he travelled the length and breadth of the country speaking to more than 80,000 children.

As part of a Royal Society of Chemistry initiative to encourage interest in science among 10–12 year olds, Bill devised the demonstration lecture ‘Science and Energy’ in 1990, which demonstrates that energy occurs in different forms which are interconvertible, with the pupils performing all the experiments. The lecture was given all over the country on some 800 occasions.

His enthusiasm and commitment brought many awards during his lifetime, including his MBE for Services to Science and to Young people, the Michael Faraday Award Lecture, the B.D Shaw Bronze medal and the RSC Silver Medal for Achievement in the Promotion of Chemistry.  In 2014, he was named as one of the Royal Society of Chemistry’s 175 Faces of Chemistry.  He was posthumously honoured as Fellow of Aberystwyth University in 2016.

The Bill Williams Memorial Lecture is hosted by the West Wales Association of Young Scientists, which was established by Bill Williams and Sir Granville Beynon in 1977.