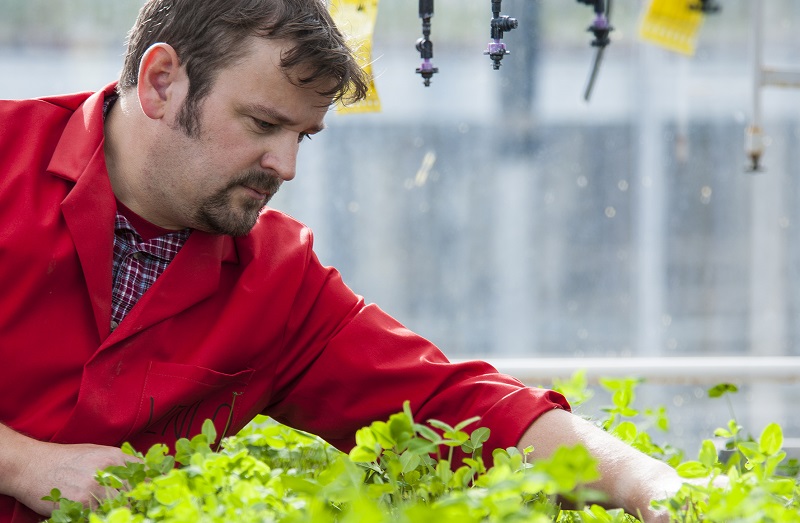 As part of the project, Professor Skot and his team are looking at how red clover production and persistency can be improved, helping farmers to improve their silage crop value. In turn, this could go some way in helping farmers reduce the need to buy-in as many expensive concentrates.

Historically, some producers have been drawn away from red clover due to a tendency for yields to drop off after a couple of years. To solve that problem, scientists developed varieties which focused on improved yields and better persistence so they yield well into their fourth and fifth harvest.

However, prolonging the productive life of the plant increases the risk of another problem red clover faces, which is where this new project is currently focused.

Professor Skot explains: “One of the biggest issues is that red clover is susceptible to trampling, and if the plants get damaged then they are susceptible to disease. White clover is stoloniferous, which means it grows by stolons [small roots] which spread across the soil surface and allows the plant to fill in any gaps in the sward. Red clover plants, on the other hand, grow from a single growing point, the crown. That means that once the crown is damaged and the plant succumbs to disease, the remaining plants aren’t able to compensate and fill in the gaps, leading to a loss in yields.”

In a bid to counter this, Professor Skot and his team are developing resistance to the two major diseases responsible for red clover loss: Stem Nematode and Crown Rot (Sclerotinia).

They hope that by developing disease-resistant plants, they can create a more robust, productive plant.

“Stem Nematode and Sclerotinia are soil-borne pathogens for which we have no recognised chemical control. The current solution is to take a long gap in the rotation to minimise the potential risk of the problem,” adds Paul Billings of Germinal. “This research project is looking at whether we can select material which is more resistant to each of these diseases, and then combine them to create varieties resistant to both pathogens.”

Professor Skot says he and his team have carried out several generations of selection for Stem Nematode and Sclerotinia. They are now at the stage where they will combine the resistance to one population so it can be tested in the field.

While it is high-yielding and produces high-quality forage from the first year, red clover does need to be managed in a way which will improve its resistance, Professor Skot adds.

“The crown of the plant is susceptible to damage, so we are looking at improving its structure.. Our research shows that if they have compact crowns then they are more resilient to damage from machinery and compaction from animals or grazing. The major management technique is not cutting below 5cm and not overgrazing so that the crown isn’t damaged.”

“It’s high-yielding and high-quality from the first year, which is one of the great things about the crop. By minimising the problem areas, we can hopefully give Welsh farmers a way to produce more of their own protein on-farm,” he says.

This project aims to help deliver on the Welsh Government’s Well-being of Future Generations Act, one objective of which is to drive sustainable growth.  It also contributes to its Economic Action Plan which encourages greater R&D and innovation.