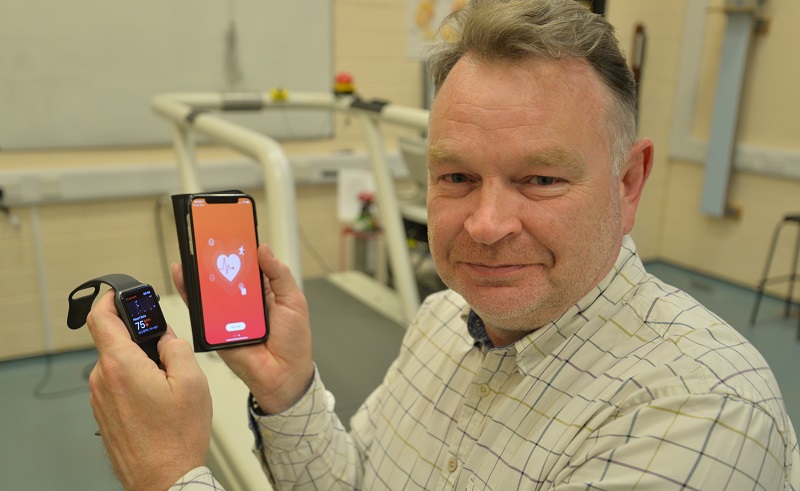 Researchers at Aberystwyth University have been testing the accuracy of popular activity trackers for a BBC Wales consumer affairs programme.

Dr Rhys Thatcher, Reader in Exercise Physiology at the Institute of Biological, Environmental and Rural Sciences (IBERS) was commissioned by BBC One Wales’ X-Ray to test the Fitbit Charge 2, Letscom HR and Letsfit.

Dr Thatcher leads the Well-being and Health Assessment Research Unit (WARU) at IBERS which studies the role of lifestyle interventions, physical activity and diet in promoting and maintaining health, and managing chronic conditions.

The test participants walked on a treadmill for ten minutes at 4km per hour, followed by a ten minute jog at 8km per hour.

Using indirect calorimetry, the team were able to calculate the amount of oxygen used during activity.

Dr Rhys Thatcher said: “There is a direct relationship between the amount of energy somebody is using and the amount of oxygen they are burning. If you know how much oxygen you’ve burned, we can then know accurately how many calories you’ve expended throughout the activity.

“At the walking pace of 4km the Letsfit had the closest agreement to the criterion measure over predicting calories by 2.6% followed by the Letscom HR which over predicted by 15.7% with the Fitbit having the largest difference of 53.5%.

“This differed to the 8km speed at which the Fitbit was the closest with a 4.3% underprediction followed by the Letscom HR and the Letsfit with 33.4% and 40.1% underpredictions respectively.

“All three of the activity trackers were better at predicting energy expenditure in the female participants at both speeds.”

According to Dr Thatcher the accuracy of activity trackers is not that important when considering their health benefits.

“Activity trackers definitely have a role to play in improving health. We all like to see ourselves progress; you have to interpret the data coming out of them with care – they are not direct measurements. However, they can be useful to compare what you’re doing today with what you did yesterday, what you’re doing this week compared to last week, so you can see progression and that can be a great motivational tool to help people to stick to an exercise programme.”

The episode is available to watch on BBC iPlayer until the end of February.