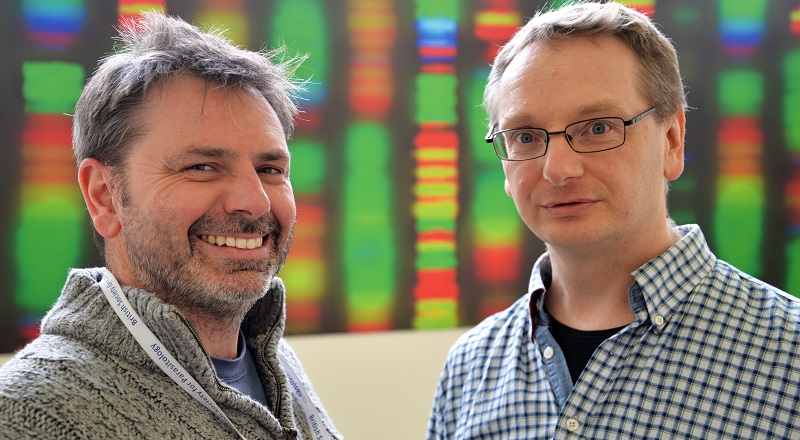 Dr Justin Pachebat (left) and Dr Martin Swain from the Institute of Biological, Environmental and Rural Sciences at Aberystwyth University.

A rapidly evolving new subspecies of the Cryptosporidium parasite – a leading cause of diarrhoeal disease in children worldwide – has been revealed in a study published in Nature Microbiology.

The study, which sheds new light on how this parasite has evolved the ability to spread more easily between people, was lead by scientists at the University of East Anglia, in a collaboration with researchers at Aberystwyth University, the Cryptosporidium Reference Unit (CRU) at Singleton Hospital, Swansea, Swansea University Medical School, and The Earlham Institute at Norwich Research Park.

Researchers sequenced and compared whole genomes from over 20 different Cryptosporidium cases to find out more about the parasite and how it infects people.

Their work will help public health interventions aimed at preventing the spread of the disease.

The Cryptosporidium parasite is one of several microorganisms that cause diarrhoeal disease. It is responsible for around 57,000 deaths each year, 80 per cent of which are among children under five years old.

The vast majority of these are in low-income countries, but outbreaks also occur in the UK and elsewhere in Europe. There is no effective drug or vaccine available, so understanding the transmission of this parasite is critical in tackling outbreaks.

Spread primarily through contact with faeces, Cryptosporidium can be contracted either from animals or from people. Scientists had previously thought there were just two main species of the parasite – one transmitted between humans and one from animals to humans.

In this study, the scientists report their discovery of recently evolved, human specialised subspecies.

Dr Kevin Tyler, one of the senior authors of the study from UEA’s Norwich Medical School, said: “Identifying this emerging subspecies of Cryptosporidium could be extremely significant to public health bodies tasked with stopping the spread of disease.

“Although they are genetically more akin to the species normally contracted from livestock animals, these forms are typically passed from person to person, so preventing their spread will require a different public health focus – putting resources into improving sanitation, or issuing advice to boil water before drinking it, rather than improving the separation of people and animals.”

Most remarkably, the team showed that the new subspecies has evolved rapidly by hybridising with another Cryptosporidium species. The genetic exchange happened only recently, probably around the time of the Industrial Revolution when urbanisation became widespread.

Since then, the new genes that were incorporated into the genome of the new subspecies have evolved rapidly, adapting themselves to their new human host.

Prof Cock van Oosterhout, from UEA’s School of Environmental Sciences, said: “Human-adapted strains of parasites can evolve and emerge readily within just a few decades by exchanging genes with each other.

“You could say that these hybridising pathogens are cheating the co-evolutionary arms race by sharing genes with one another. That way, they can use genes that are adapted to infect one species for infecting another species - and in this case, humans were in their crosshairs.”

The team is now putting together a “diagnostic toolbox” to specifically discriminate the different forms, enabling public health bodies to identify the new form of Cryptosporidium, and design local strategies to prevent the spread of infection.

Dr Tyler said: “Using the data we provide in the paper it will be possible for these kinds of Cryptosporidium to be identified in microbiology laboratories using specific probes and standard techniques - facilitating straightforward, but effective interventions to be planned. Understanding what approach is likely to be most effective, particularly during outbreaks, will help public health organisations concentrate resources and deliver the best outcomes.”

Dr Justin Pachebat from the Institute of Biological, Environmental and Rural Sciences at Aberystwyth University said: “This all stems from a technique we developed, with the CRU, to genome sequence clinical isolates of Cryptosporidium, and because Dr Martin Swain applied novel bioinformatics techniques to assemble these complex parasite genomes”.

The research was supported with funding from the EU project AQUAVALENS, as well as a grant from the Biotechnology and Biological Sciences Research Council (BBSRC), the Earth & Life Systems Alliance, and Knowledge Economy Skills Scholarships, part funded by the Welsh Government’s European Social Fund (ESF) convergence programme for West Wales and the Valleys.

‘Evolutionary genomics of anthroponosis in Cryptosporidium’ is published in the journal Nature Microbiology on Monday, 4 March, 2019.

Evolutionary genomics of anthroponosis in Cryptosporidium