Identifying the grass pollen that gets up your nose 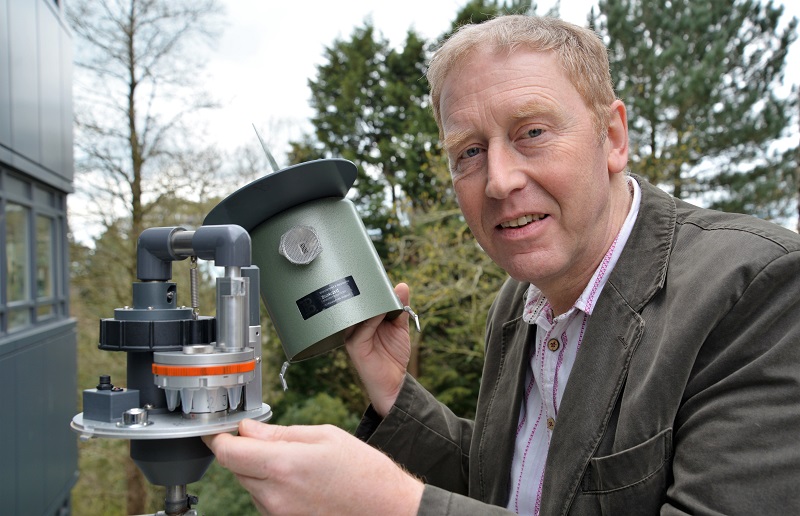 Dr Gareth Griffith with one of the pollen collectors used in the study.

Scientists could be a step closer to providing more precise pollen forecasts for asthma and hay fever sufferers, conditions that affect one in four of the UK population.

Researchers at the Institute of Biological, Environment and Rural Sciences (IBERS) at Aberystwyth University have been working on a major three-year project led by Bangor University to analyse airborne grass pollen.

They also turned to the seed biobank at IBERS, whose’ collection dates back to the 1920s, and information collected by the National Botanic Garden of Wales’ Barcode Wales project to put names to the different grass species identified in the study.

Writing in Nature Ecology & Evolution, the researchers report that it is not just the total amount of grass pollen in the air that could cause those particularly bad days for asthma and hay fever sufferers.

Days which see increased asthma attacks or intense hay fever could be related to the release of pollen from particular grass species.

Current pollen ‘counts’ and forecasts cannot assess abundance of individual species in the air, only the total grass pollen load.

While scientists can distinguish between the pollen released by individual tree and weed species, grass pollens are virtually identical in appearance and cannot be distinguished.

Step forward DNA metabarcoding, a technique which enables scientists to automatically identify any pollen grains or other biological materials caught in a sample of air, water or soil, by recognising and matching its unique DNA ‘barcode’.

For the first time, grass pollens collected across the UK over the course of one allergy season have been analysed using this high-tech method.

This has enabled the team to start investigating links between certain pollen types and those days on which plant allergy sufferers and people with asthma are most affected.

The study was led by Professor Simon Creer of Bangor University.

Professor Creer said: “I’m a hay fever sufferer myself, and I know that on some days, despite a high pollen forecast, I can be less affected than on other days when the forecast appears to be lower. This led me and others to wonder whether it’s the high load of pollen alone that causes the problem, or whether the different grass pollens cause different levels of reaction.”

The work at Aberystwyth University was led by Dr Gareth Griffith, Reader at IBERS.

Dr Griffith said: “Pollen forecasts report the total pollen counts but not exactly which types of pollen are floating around. This problem arises because many pollen types look very similar under the microscope but can have very different effects when you breathe them in. In particular, grass pollens are all very similar in appearance but most people are sensitive to only a few of the many dozens of grass species which grow in the UK.”

“It was very pleasing how the DNA metabarcoding method was able to tell us when the different grass pollens were present in the air across the UK. The project has also benefitted greatly from the huge germplasm collection of grasses amassed at IBERS since research on grasses began in Aberystwyth a century ago”

The work is now looking at where the pollen comes from, how it moves through the air and how different types of pollen can be linked to allergies.

Links are also being studied between hospital admissions and GP prescriptions for certain pharmaceutical products, to identify correlations between healthcare data and increases in particular grass pollens, with a view to improving pollen forecasts.

The research was led by an interdisciplinary team of scientists from Bangor University, The National Botanic Garden of Wales, Aberystwyth University, University of Exeter, University of New South Wales, Sydney; The University of Queensland, University of Worcester, in collaboration with the UK Met Office, collectively known as PollerGEN (http://pollergen.bangor.ac.uk/), and supported by a £1.2 million NERC Standard Grant.