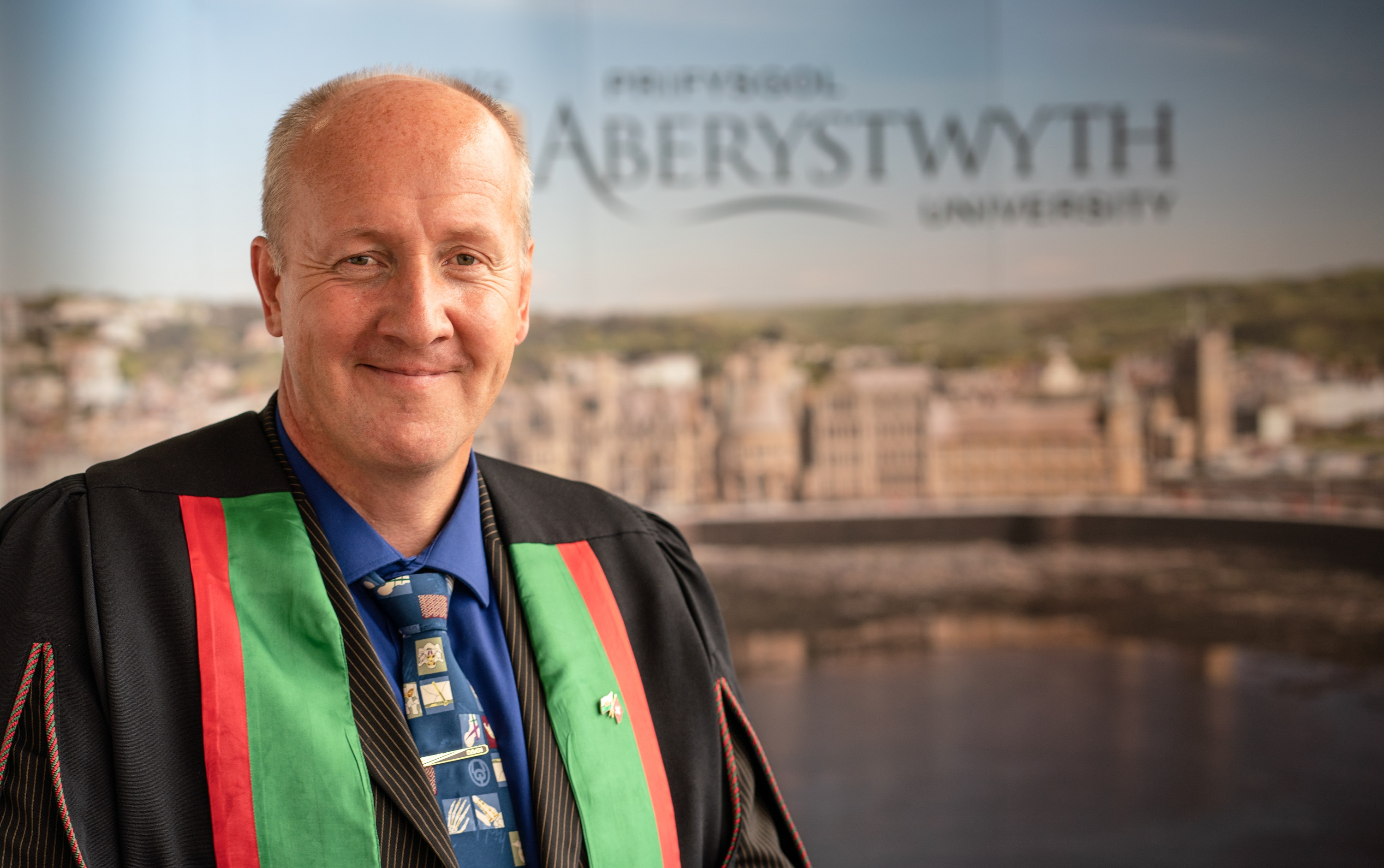 The Director of a leading orthopaedic research institute has been presented with an Honorary Fellowship of Aberystwyth University.

Professor R Geoff Richards was born and schooled in Llanfyllin, Powys.  He graduated from Aberystwyth with a BSc in Cell and Immunobiology in 1990, followed by a Masters in 1991 and a PhD in 1997.

Since 2009, he has been Director of the AO Research Institute Davos (Switzerland) – a leading organisation in the field of orthopaedics, including the global implants industry and the training of surgeons.

His research work on metal implant interfaces in the trauma area of orthopaedics has led to major improvements in the design and manufacture of fracture fixation products.

He is President of the Tissue Engineering & Regenerative Medicine International Society and Chair of the International College of Fellows for Orthopaedic Research. In 1999 he co-founded eCM journal, a pioneer in open access publishing.

Chair of Council, Pro Vice-Chancellor, graduates and supporters.  It is an honour and a privilege to present Geoff Richards as a Fellow of Aberystwyth University.

Born and schooled in Llanfyllin in Powys, Geoff Richards graduated from Aberystwyth in 1990 with a degree in Cell and Immunobiology.

He stayed on in Aberystwyth for a further seven years, completing an MSc in Biological Electron Microscopy in 1991, and in 1997 a PhD in Cell Adhesion to Implant Surfaces.

In 1999, he co-founded the eCM Journal, along with his Aber supervisor Iolo ap Gwynn and the late Professor Godfried Roomans.  Arguably the first online open access journal in the world it was pioneering in the field of open access publishing, and two decades on it is the number one rated journal in the area of trauma research.

Geoff Richards once said “It is very unlikely I would be where I am now if I had not been at Aber.”

And, indeed his specialist degree and masters did set him onto a unique career path.

From this west-Wales University, Geoff journeyed to Switzerland and joined the AO Research Institute in Davos.

Geoff’s own research, which began here in Aberystwyth, has led to major improvements in the design and manufacture of internal fracture fixation products, which has in turn led to greatly improved clinical outcomes for patients world-wide.

Geoff became Director of the AO Research Institute in 2009, and is responsible for an annual budget of almost £11m. Over the last ten years, he has strengthened the Institute’s collaborations with surgeons and clinical divisions, and formed stronger academic connections to international universities and societies, including through the creation of highly competitive medical research fellowships which attracts resident and senior surgeons from around the world to spend 6-12 months at the Institute.

Geoff holds a Professorship at Cardiff University, along with chairs at the Faculty of Medicine, University of Freiburg, Germany and at the First Affiliated Hospital, Sun-Yat-sen University, Guangzhou, China.

He is passionate about musculoskeletal research, development and innovation.  His driving force is his desire to improve patient care.

From his student days in Aberystwyth when he joined a volunteer student mission to Romania to deliver medical supplies after the revolution; to today when his research has translated into major improvements in the medical care and health outcomes for trauma and fracture patients, Geoff has, without question, improved the lives of countless people across the globe.

Chair of Council, it is my absolute pleasure to present Professor R Geoff Richards to you as a Fellow of Aberystwyth University.