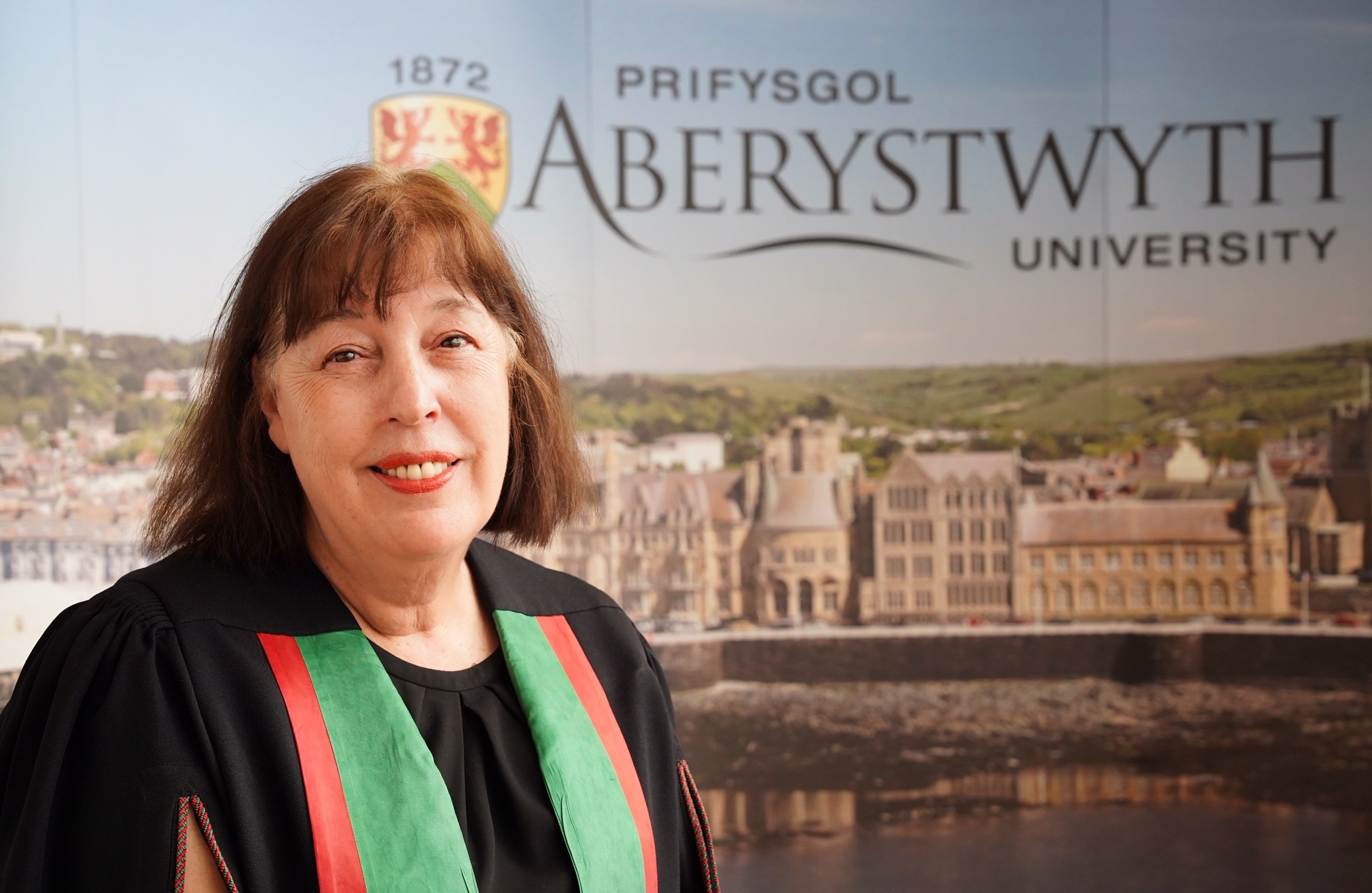 Professor Virginia Gamba, Under Secretary General of the United Nations with the function of Special Representative of the Secretary General for Children and Armed Conflict, and Honorary Fellow of Aberystwyth University

An International Politics alumna with more than thirty years’ experience as an expert on strategic issues relating to peace and security, human security and disarmament, has been honoured with a Fellowship of Aberystwyth University.

Professor Virginia Gamba, who is originally from the San Martin province of Buenos Aires, holds an MScEcon in Strategic Studies from Aberystwyth University.

In 1995 she shared the Nobel Peace Prize awarded to the Pugwash Conferences on Science and World Affairs for efforts toward nuclear disarmament.

Chancellor, Pro Vice-Chancellor, graduates and supporters.  It is an honour and a privilege to present Virginia Gamba as a Fellow of Aberystwyth University.

It is a privilege and personal pleasure for me to introduce Virginia Gamba for a University Fellowship. Virginia and I were contemporaries as students in the Department of International Politics at Aberystwyth in the early 1980s. I was then an undergraduate, while she was a Masters student. However, whereas I was able to graduate in the same Great Hall as our students today, Virginia was not because of the rather inconvenient fact that war had broken out. As an Argentine national, given the conflict over the Falkland Islands, she was unable to graduate in person but received her degree in absentia. It is therefore especially pleasing to see her here today, in person, some 37 years later to receive a Fellowship.

The Anglo-Argentine war proved to be important to Virginia’s work after graduating from Aberystwyth, first in advising the emerging Argentine democratic government on the civilian control of the military, and then as an academic.  At King’s College, London, she wrote with Lawrie Freedman the first great book on the Falklands Conflict, Signals of War. This book was remarkable not least in the way in which it wove seamlessly together the Argentinian and British stories into a single, coherent picture of the conflict.  Whereas Virginia’s co-author, Lawrie Freedman, remained an academic, eventually becoming the official historian of the Falklands Conflict, Virginia’s life became one of distinguished public service, although also maintaining the production of academic publications.

Her life’s work has been concerned with creating a safer world for individuals, especially vulnerable individuals. Although making important contributions in a number of fields, what she is perhaps best known for is her work on the global illicit trade in small arms and how to prevent it. For two decades, Virginia worked with police forces, national governments, international organizations and charitable foundations, especially in Africa. She has been one of the key figures globally both in raising the profile of the problem of the illicit trade in small arms and in leading national and international efforts to control it.

The conflict in Syria, however, led her into new arenas. From 2012, chemical weapons commenced to be used in Syria. At that time, the Secretary General of the United Nations named Virginia as Director of the United Nations Office for Disarmament and, as such, when the massive alleged chemical weapons attack occurred in the Ghoutta district of Damascus in August 2013, she set up the investigative team that ultimately verified the use of Sarin in that attack. This led to the destruction of the chemical weapons arsenal of Syria. Nevertheless, allegations of continued use of toxic substances as weapons in the Syrian Conflict continued to be received. In 2015, the Secretary General appointed Virginia as Assistant Secretary General to Head efforts to identify not only substances used but perpetrators of use in the Syrian Conflict. During this Security Council mission, her team identified repeated use of Mustard Gas as well as chlorine as a weapon, with perpetrators including the Syrian Arab Air Force and the so-called ISIL armed group.

In 2017, the new Secretary General of the United Nations appointed Virginia as Under Secretary General in charge of the office of monitoring and reporting on grave violations against children in situations of armed conflict. She is the Special Representative of the Secretary General for Children and Armed Conflict. Children are amongst the most vulnerable in society, and this is particularly so in times of conflict. Virginia’s role is to monitor and report to the Security Council the extent of annual violations against children in conflict, develop plans to stop violations against children, attribute responsibility when such violations occur, and ensure the release and recovery of children affected by armed conflict.  It is, I think, one of the most challenging and important roles in the UN system, and I am proud that it is an Aberystwyth graduate that is undertaking it.

Chancellor, it is my absolute pleasure to present Virginia Gamba to you as a Fellow of Aberystwyth University.