Leading figure in the campaign to eradicate polio honoured as Fellow 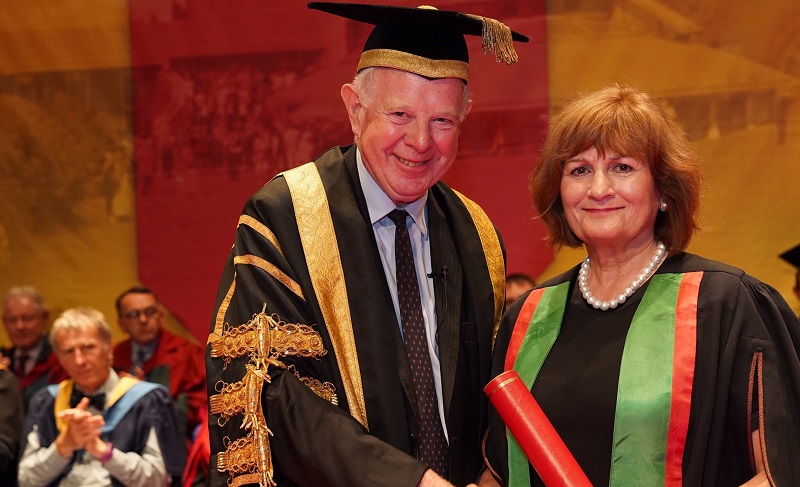 A leading figure in the campaign to eradicate polio, has been honoured with a Fellowship of Aberystwyth University as part of its graduation celebrations.

Judith Diment, who studied geology and geography at Aberystwyth, has been a passionate fundraiser and global campaigner for the eradication of polio for more than two decades.

She has also organised many polio advocacy and media events at the Houses of Parliament, European Parliament and Chatham House, and has held senior positions in marketing and communications including the Natural History Museum in London.

In 2016 she was elected as a Councillor for Royal Borough Windsor & Maidenhead.

The same year, she was presented with the “Rotary Service-Above-Self Award”, the highest honour bestowed to Rotarians who volunteer their time and talents to help others.

Chancellor, Vice-Chancellor, graduates and supporters.  It is an honour and a privilege to present Judith Diment as a Fellow of Aberystwyth University.

Judith Diment, who was born into a Welsh farming family, graduated in geology and geography at Aberystwyth.

She has gone on to be an award-winning businesswoman, extraordinary fundraiser, global campaigner, international event manager, experienced lecturer, published author, and a passionate advocate for polio eradication.

It was through her public relations work that Judith first became involved with Rotary in the 1990s, and she joined her first Rotary Club in 2004.

Through Rotary, Judith has been an advocate for polio eradication for more than 20 years.

She now leads Rotary’s UK advocacy efforts, constantly fighting to raise the profile of polio with politicians and governments across the globe.

She Chairs the IPPC Grants Sub-Committee which recommends essential grants to WHO and Unicef up to $150m annually to fund technical assistance staff, vaccinators, social mobilisation; transportation, and communication: a truly global effort to eradicate the disease.

She has organised numerous polio advocacy and media events at Houses of Parliament, European Parliament and Chatham House.

In February 2008, Judith arranged for the now familiar catchphrase “END POLIO NOW” to be beamed onto the Palace of Westminster.  Photos of the spectacular light installation went viral, and it became the global brand of Rotary International’s initiative to encourage the world to get behind the final push to eradicate polio from the four remaining endemic countries, and has since been projected onto dozens of iconic buildings around the world.

In 2016 she received the “Rotary Service-Above-Self Award” from the President of Rotary International, Ravi Ravindran.  This is the highest honour bestowed to Rotarians who volunteer their time and talents to help others.

A tireless advocate for this cause, in 2017, Judith led Rotary’s efforts to create champions for polio eradication among UK political leaders, resulting in the UK committing an additional £100 million to the global initiative.

And it is not surprising that when, last year, Rotary International marked its celebration of “30 Years of Women in Rotary” by naming 30 incredible members who have served and led by example, Judith was among the women chosen.

Judith Diment has played a significant part in this amazing success story.

Chancellor, it is my absolute pleasure to present Judith Diment to you as a Fellow of Aberystwyth University.