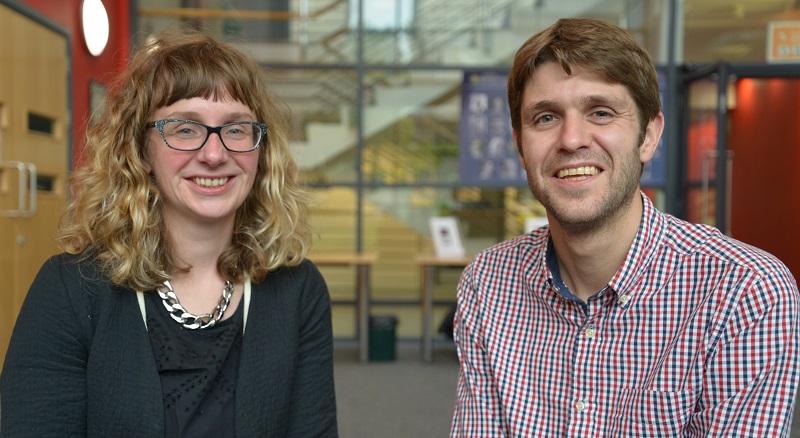 Dr Elin Royles and Dr Huw Lewis, two of the authors of 'Promoting regional or minority languages in a global age'.

Governments should put greater emphasis on understanding how economic development affects minority languages if Welsh and other lesser-used languages are to thrive, according to researchers at Aberystwyth and Edinburgh universities.

The call is one of 14 recommendations in a report on promoting minority languages to be launched at the Aberystwyth University stand at the National Eisteddfod on Thursday 8 August 2019.

'Promoting regional or minority languages in a global age' is published by the Revitalise research network.

Established in 2017, the network has focused on the implications of contemporary social, economic and political changes associated with globalisation for how language revitalisation efforts should be designed and implemented.

As well as the impact of economic development, the report addresses how language is passed from generation to generation within families, international migration, multiculturalism and balancing the role of governments and civil society organisations.

Study co-author Dr Huw Lewis from the Department of International Politics at Aberystwyth University said: “There have been many attempts by policy makers in Wales, Scotland and beyond in recent years to consider how the use of a minority language can boost economic performance - for example, does the ability to speak a minority language boost an individual’s job prospects and their potential earnings, or whether companies' use of different minority language sectors boosts their market profile or turnover.

“However, it became apparent during the project that, to date, there has been a lack of consideration of how economic processes influence the viability of language communities. For example, how specifically do economic developments in a particular area or regional economic development strategies affect language, either in terms of the number of speakers, their geographical density, or their tendency to use the language.

“Of all the policy challenges studied during the project, this is the most fundamental to the future of minority languages ​​such as Welsh, yet it is the one where current understanding, both here in Wales and internationally, is at its weakest. There is therefore a demand for governments to prioritise the field as a matter of urgency”, he added.

Dr Lewis and Dr Elin Royles will discuss the recommendations during two sessions at the University's stand at the National Eisteddfod.

On Thursday 8 August at 12:00 Dr Lewis will discuss the link between economic development and language revitalisation in the company of Assembly Member Siân Gwenllian and Edward Jones of Bangor University. The session will be chaired by Emyr Lewis, recently appointed Head of the Department of Law and Criminology at Aberystwyth University.

Then on Friday 9 August at 12:00 Dr Royles will discuss balancing the role of government and civil society organisations with Elin H G Jones of the Mercator Centre, Trinity Saint David University and Meirion Davies of Menter Iaith Conwy. The session will be chaired by Rhian Huws Williams, a member of Welsh Government’s Welsh Language Partnership Council.

Revitalise is led by Dr Lewis, Dr Royles and Professor Wilson McLeod of the University of Edinburgh, and is funded by the UK Arts and Humanities Research Council - the AHRC.

Between May 2017 and February 2019 the network held a series of four workshops in Aberystwyth, Edinburgh and Cardiff.

The aim was to bring together a cross section of academic researchers in the fields of the arts, humanities and social sciences, as well as a number of leading language policy practitioners and members of civil society organizations working in language revitalisation internationally to discuss the implications of the social changes.

Then, in April 2019, a conference was held in Brussels in conjunction with the Network for the Promotion of Linguistic Diversity, with contributions from representatives of the European Commission, the Council of Europe and a number of regional governments active in the promotion of minority languages.

The launch of the final report at the National Eisteddfod represents the culmination of the work and the aim now is to hold further discussions in other European nations which promote minority of regional languages.

More information about the Revitalise network can be found on the project website https://revitalise.aber.ac.uk/en.