Curious Kids: how do ripples form and why do they spread out across the water? 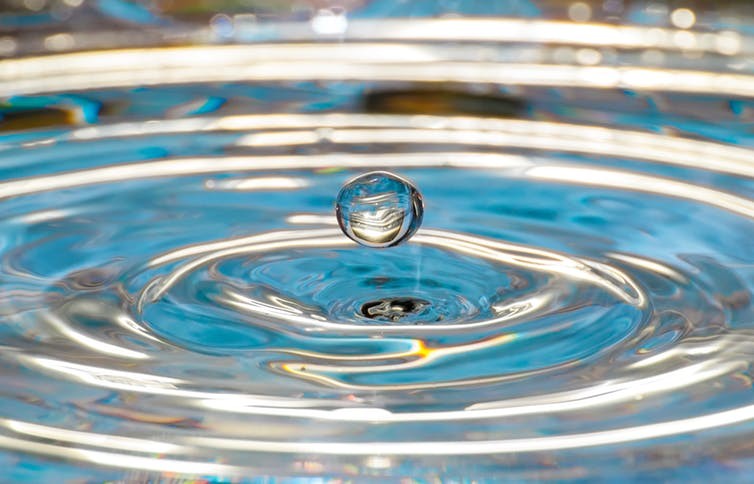 Writing in The Conversation, Professor Simon Cox from the Department of Mathematics explains why the simple experiment of throwing a rock into water actually reveals some fundamental rules of physics:

When I was playing “splash rocks”, I noticed that when I threw the rock into the river it made a circle shape, which got bigger. How does it make the ripple? Why do the circles spread out further and further? Why do they stop? – Rowan, aged six, UK.

Hi Rowan, these are good questions, and a fun experiment to do.

When you throw a rock into a river, it pushes water out of the way, making a ripple that moves away from where it landed. As the rock falls deeper into the river, the water near the surface rushes back to fill in the space it left behind.

The water usually rushes back too enthusiastically, causing a splash – and the bigger the rock, the bigger the splash. The splash then creates even more ripples that tend to move away from where the rock went into the water.

When water is in its calmest, lowest energy state, it has a flat surface. By throwing the rock into the river, you have given the water some energy. That causes the water to move around, trying to spread out the energy so it can go back to having a still, flat surface.

This follows a powerful principle of physics, which is that everything seeks to find a state where its energy is as small as possible.

One way energy can move around is by forming waves. For example, the waves you see at the beach are formed by energy from the wind. Light and sound also move in waves, though we can’t see that directly. And the ripples that you see in the river are small waves carrying away the energy from where you threw the rock.

You might already know that everything you can touch is made up of lots of tiny molecules, which are themselves made up of even smaller parts called atoms.

That’s what creates the peaks and troughs you see on the surface of the water. And that’s how the ripple travels away from your rock – a bit like a human wave around a stadium.

Dragging neighbouring water molecules up and down is hard work, and slowly uses up energy, so the ripples get smaller as they get further away. Eventually, the ripples use up all the energy from the rock and the splash, and shrink until we can no longer see them.

Ripples often spread out in circles, but this isn’t the only possibility. If you throw a stick into the water it will create straight ripples on the sides, and round ripples near the ends. So your rock probably made circular ripples because the rock itself was quite round.

But something else is happening too: different waves move at different speeds. Waves with a lot of energy move more quickly. For example, really big tidal waves, or tsunamis, race across the ocean as fast as a plane flies (up to 800 kilometres per hour).

Curious Kids is a series by The Conversation, which gives children the chance to have their questions about the world answered by experts. If you have a question you’d like an expert to answer, send it to curiouskids@theconversation.com. We won’t be able to answer every question, but we’ll do our very best.