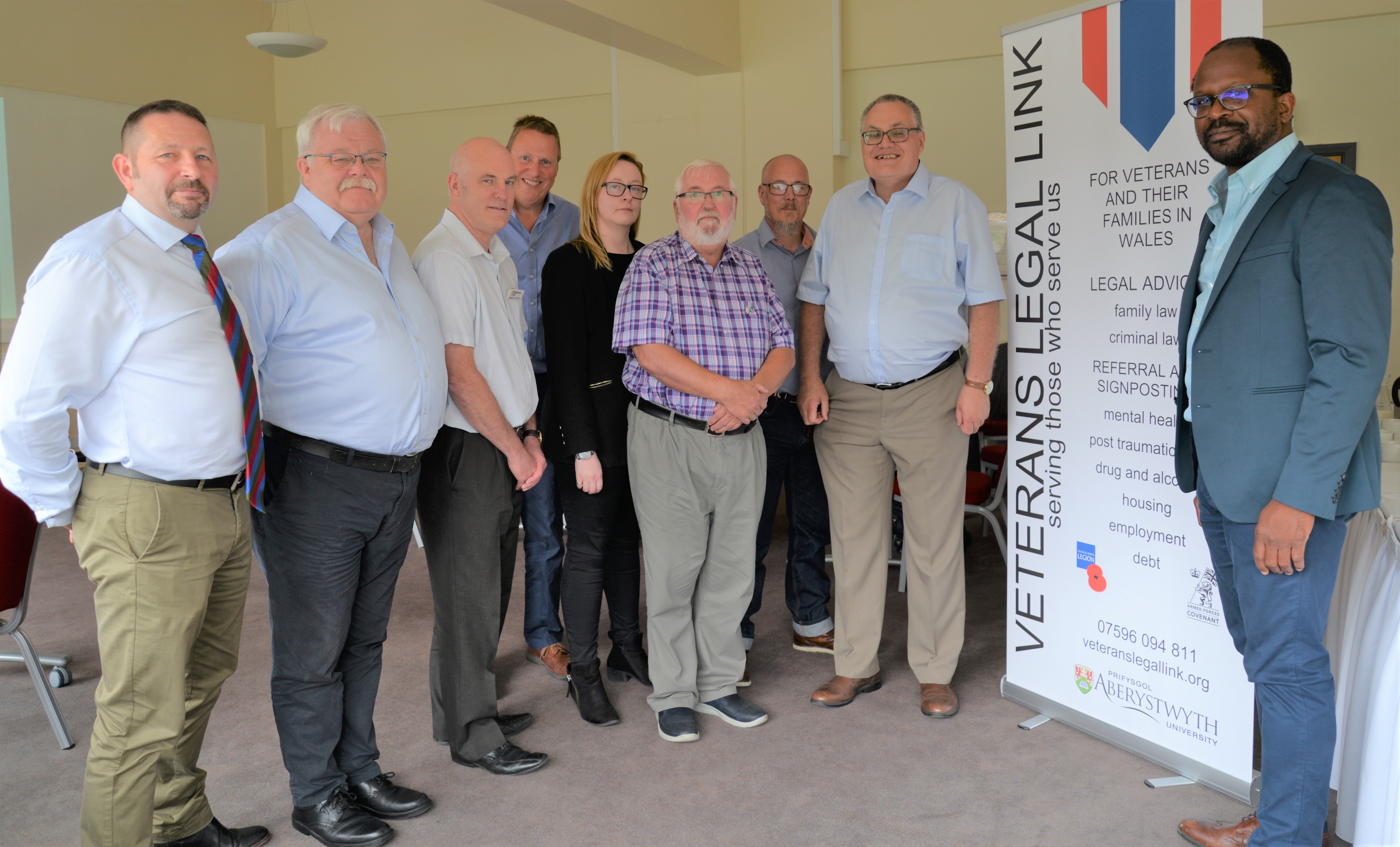 Dr Olaoluwa Olusanya (right) from Aberystwyth University’s Department of Law and Criminology set up the Veterans’ Legal Link in 2015.

A unique Wales-wide legal research project at Aberystwyth University is on course to reach its target of helping 1,000 veterans and their families.

The Veterans Legal Link (VLL) was set up in 2015 to provide free legal advice, guidance and casework to veterans and their families, as well as signposting them to both veteran and civilian  specialist services.

Almost 500 veterans and their families have already benefitted from the project and the aim is to pass the 1,000 mark by July 2020.

The VLL was originally focused on supporting veterans in Ceredigion but has now expanded to cover the whole of Wales.

The project is led by Dr Olaoluwa Olusanya, a Senior Lecturer in the University’s Department of Law and Criminology.

“The Veterans Legal Link was established as a result of my earlier research work, which looked at the psychosocial causes of military related crimes, at mental health and well-being, and at the number of veterans who came into contact with the criminal justice system as they adjusted to civilian life. Post-Traumatic Stress Disorder (PTSD) was often a factor, along with alcohol and drugs misuse,” said Dr Olusanya.

“It became clear to me that veterans who become involved with the criminal justice system have different health and wellbeing needs and offending behaviour patterns. I therefore set about addressing these needs by translating my research into a non-medical psychosocial intervention, which can eliminate or reduce the risk factors for offending behaviour and mental health problems. I established the Veterans Legal Link project, working closely with partners such as the Royal British Legion, Veterans NHS Wales, Change Step and other Armed Forces Covenant groups.

“The Veterans Legal Link is the UK’s only one-stop-shop offering not only free legal advice to veterans but also signposting clients to a range of other support agencies. The majority of cases we handle relate to issues of family law, debt and money issues, criminal proceedings and employment matters.

“As we approach Remembrance Sunday, it is timely to remember the unique needs of veterans. Most of us are fortunate never to have experienced military conflict and the effect it can have on a person’s mental and physical health. Other aspects of being in the military may also have a far-reaching impact – for example, being on tour and away from one’s family and friends for a long time.

“The service operates in the context of legal aid diminishing in scope since the implementation of the Legal Aid, Sentencing and Punishment of Offenders (LASPO) Act 2012, most notably in the areas of family law and welfare law. The project sought to close the gap in provision left by legal aid cuts by utilising new methods of bringing advice and guidance to individuals regardless of their location or financial situation.”

The Veterans Legal Link received a grant of £45,800 from the Royal British Legion in 2019.

Antony Metcalfe, Wales Area Manager for the Royal British Legion, said: “The Royal British Legion external grants scheme awarded Veterans Legal Link a grant to enable this vital and much needed project to run out of Aberystwyth University and we are really pleased to see that it is on course to help 1,000 veterans and their families. With the nation now focused on Remembrance this November, it is also important to highlight support services such as this one that enable many veterans to seek the support and guidance that they require.”

The project was also awarded £20,000 by the Ministry of Defence’s Armed Forces Covenant Fund and £5,000 by the Big Lottery Fund, Wales Awards For All in 2016.

The Veterans Legal Link now works with more than 20 partner organisations and is currently developing plans for a bespoke web-based platform, which would open up the service to veterans across the UK.