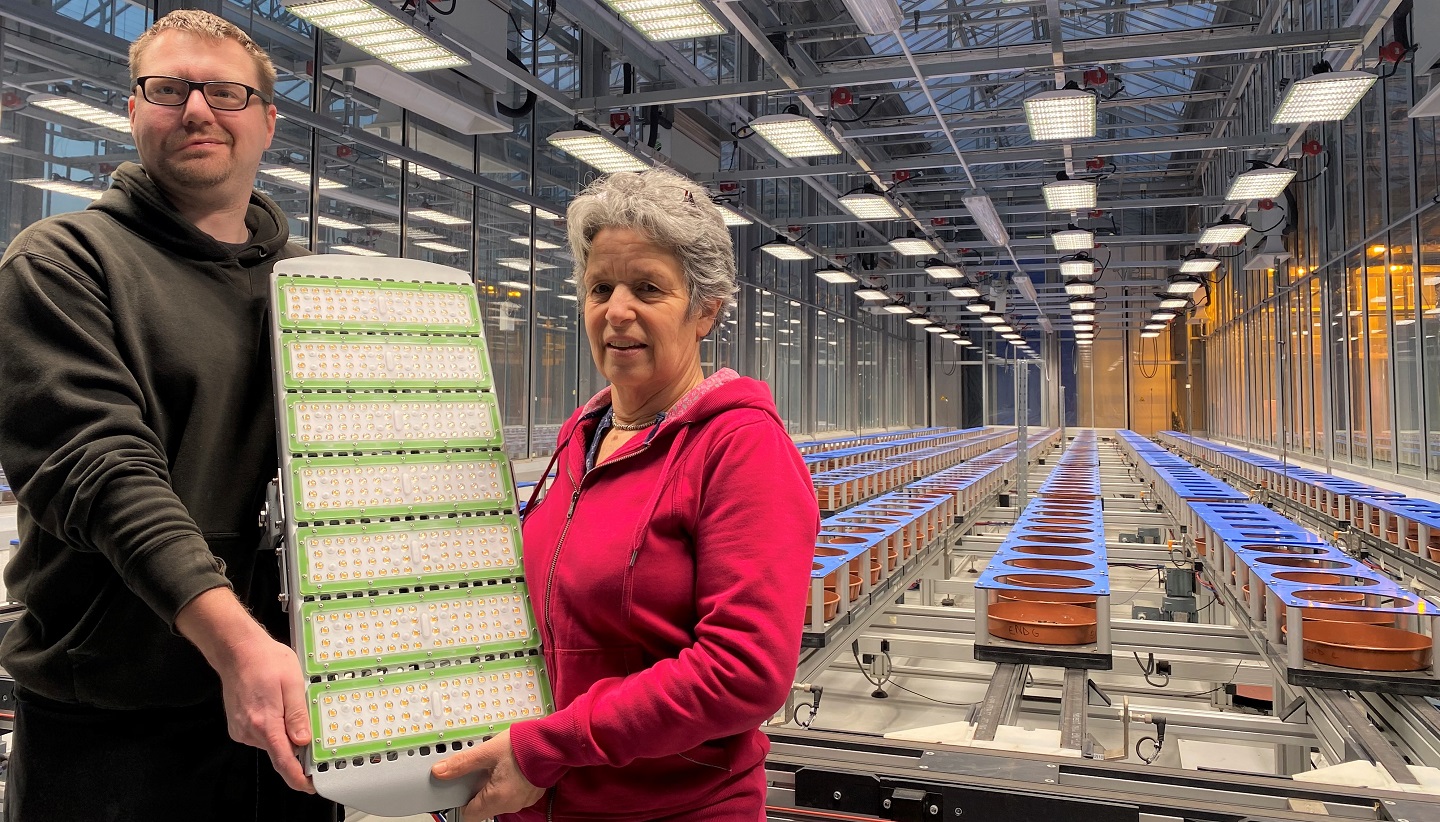 Jason Brook and Fiona Corke from National Plant Phenomics Centre with one of the 96 LED lights that have been fitted to the centre’s main greenhouse at the Institute of Biological, Environmental and Rural Science, Aberystwyth University.

A state of the art greenhouse at Aberystwyth University that is helping breed next-generation plants is itself cutting its carbon emissions by installing new LED lights.

In doing so, the National Plant Phenomics Centre at the Institute of Biological, Environmental and Rural Sciences (IBERS) will reduce its carbon dioxide emissions by 60 tonnes per year.

The Centre is home to pioneering research work that sees biologists working with engineers, computer scientists and mathematicians to identify and develop resilient crops that can help combat the effects of climate change on agriculture, such as increased drought resistance and the ability to survive floods.

Funded by the Biotechnology and Biological Sciences Research Council (BBSRC), the greenhouse is the only one of its kind in the UK and one of only a handful of similar facilities in the world.

It provides open access to its technology nationally and internationally, and here Aberystwyth University scientists are contributing to global food-security by breeding ‘smart’ plants, better adapted to the climate of the future.

Dr Fiona Corke, Smarthouse Manager at the National Plant Phenomics Centre at IBERS, said: “Plant phenomics is a science that has the ability to change our lives by responding to and predicting future environmental needs. We are very lucky that the Centre features a computer controlled greenhouse, where plants are tended and measured automatically on a daily basis.

“We then take that data and use it to identify what genes within the plants have caused the different traits, so we can selectively breed stronger plants with the features we want to make them more resilient to conditions caused by climate change, such as drought or even flash flooding.

“It is therefore vital that our Centre is not adding to the world’s carbon footprint itself, as that goes completely against the principles of work we aspire to here. By installing these LED lights, we are making a contribution to help Aberystwyth University’s effort to limit global warming.”

96 of the original lights in the robotic greenhouse have now been replaced with LED lights that provide the correct wavelength for plant growth, particularly during winter months.

As well as significantly reducing carbon dioxide emissions the new lights will also cut the Centre’s annual electricity bill by around £17,000.

Dewi Day, Aberystwyth University’s Sustainability Adviser, added: “We have recently invested in two innovative green energy lighting projects on our Gogerddan campus. This means we will now see a saving of 12% on previous annual electricity running costs for the site, and will save over 100 tonnes of Carbon dioxide – significantly reducing the facility’s carbon footprint.

“Whilst the University has already achieved substantial reductions in carbon dioxide equivalent emissions over the last 10 years, it is now developing a new Carbon Management Strategy in-line with the Welsh Government’s ambitious target of a Carbon Neutral Public Sector by 2030.”