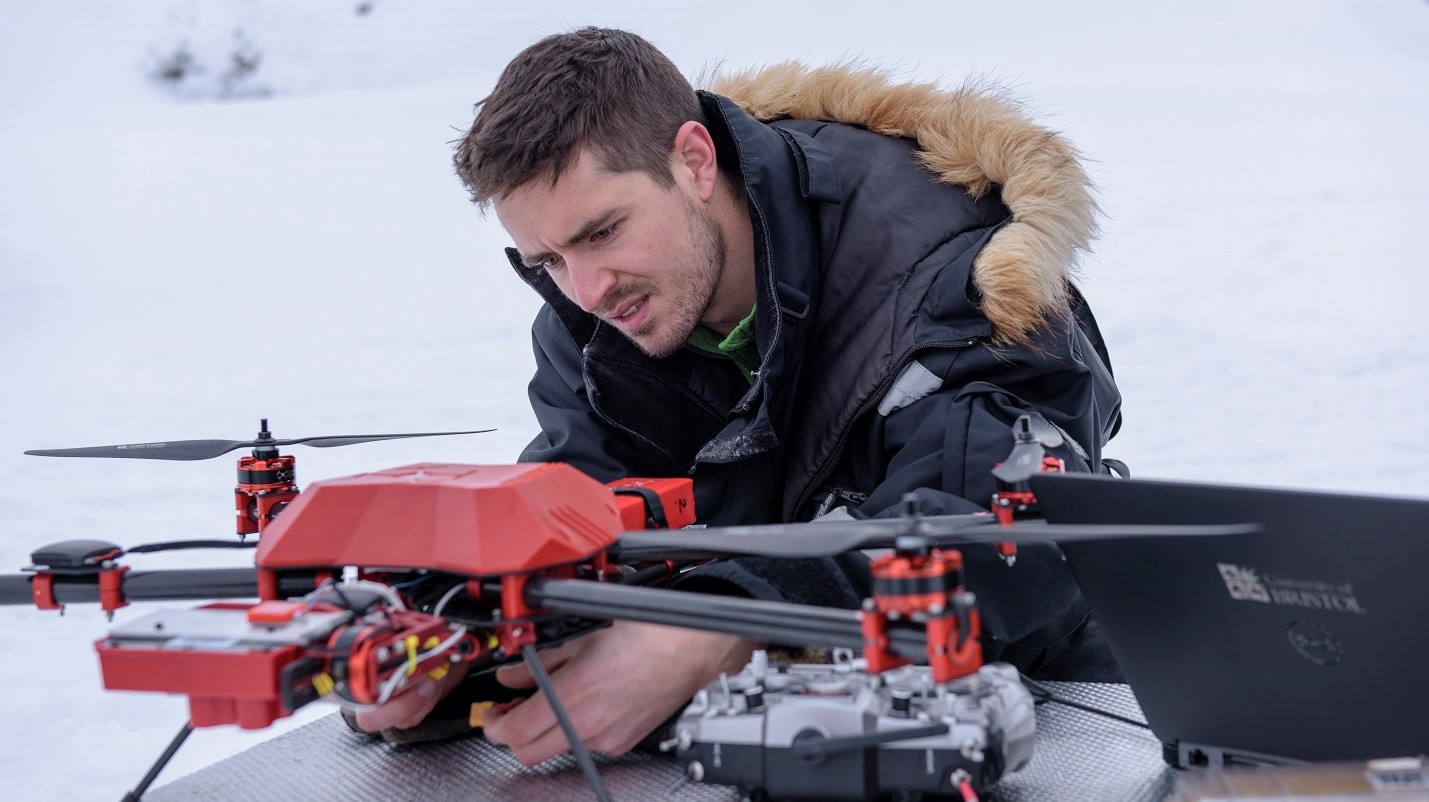 Innovative use of Artificial Intelligence (AI), satellite imagery and drone technology will have a significant impact on climate change research, according to a scientist at Aberystwyth University.

Dr Joseph Cook from the Institute of Biological, Environmental and Rural Sciences (IBERS) and an international team of scientists are monitoring microscopic organisms that live on glaciers and ice sheets in the Arctic.

The research is helping to establish whether there is a relationship between the speed at which glaciers melt, and the microscopic life prevalent on them.

Using drones, Dr Cook has been able to map the algae covering 200m x 200m areas of ice in Svalbard and Greenland and use the information to analyse satellite data over much larger regions.

Writing in The Cryosphere, the journal of the European Geosciences Union, the team reveals that as much as 12.2 billion tonnes of ice melted as a consequence of these algae in the summer of 2016, in the south-western region of the ice sheet where these algae are most abundant.

This upper estimate represents 13% of the total ice lost from that region over the summer months.

Dr Cook, who has just returned from Antarctica, said: “We have found that the dark coloured algae (dark brown/purple) absorb sunlight very effectively - in the same way that when we wear black clothes on a hot day, we feel hotter. Because algae cells contain a pigment that acts as a natural ‘sun-screen’ that absorbs sunlight and re-radiates the energy back out as heat, that heat causes ice to melt.

“These initial findings indicate that the more dark coloured algae we see on a glacier, the faster that glacier will melt, and that on the Greenland Ice Sheet this is happening on an enormous scale.”

Building on their initial findings and thanks to the use of cutting-edge AI technology, the team has now been able to accurately measure algae coverage and ice melt on a large scale.

Dr Cook added: “By training an algorithm on our field data and validating it using drone imagery, we were able to classify the ice surface into categories and produce maps.

“We can now combine this with satellite imagery and, using cloud computing tools, scale it to much larger areas. The data generated shows us the amount of melting that can be attributed to the algae.”

The team’s discoveries will have a significant impact on the future of climate change research and management.

Dr Cook said: “This is an exciting finding, and it is really just the beginning – this work will open the door to a whole new field of research about algae’s contributions to ice melting rates, and therefore sea-level rise. Until now, it was not known that microbial life contributes to sea-level rise - but now we can start to build this in to future projections which will enable more accurate planning and management.

“Internationally, scientists and policy makers will now be able to make better informed decisions to help prepare for sea-level rise across the globe over the coming decades, and potentially even centuries.”

The research is being conducted with support from a Microsoft AI for Earth grant, which makes Microsoft cloud and AI tools available to those working to solve global environmental challenges, in close collaboration with the Natural Environment Research Council’s (NERC’s) Black and Bloom and MicroMelt projects.

Glacier algae accelerate melt rates on the south-western Greenland Ice Sheet was published on 29 January 2020. Additional authors from Aberystwyth University on the study are Professor Alun Hubbard and Dr Tristram D. L. Irvine-Fynn, both of the University’s Department of Geography and Earth Sciences.