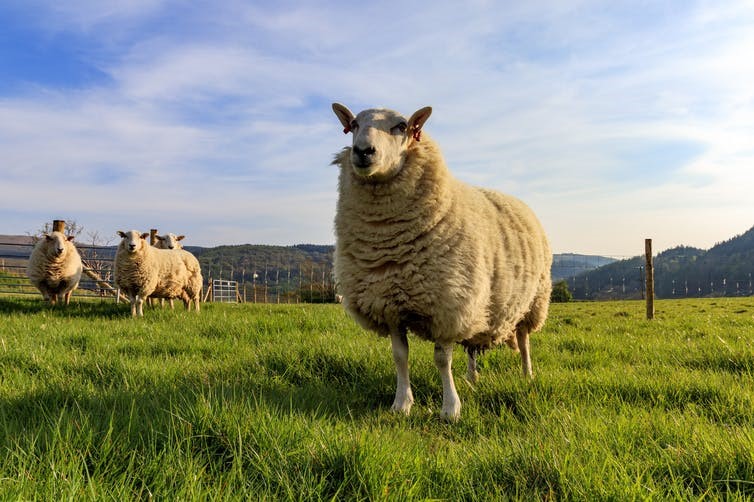 Writing in The Conversation, Muhammad Naveed Arshad and Mariecia Fraser from IBERS discuss the problems facing sheep farmers owing to extreme summer weather, and the fact that a continuation of the exceptional heat and drought of recent summers will make it unlikely that Wales can continue to support its 10 million sheep:

After the hottest June on record, July 25 2019 was the hottest July day ever recorded in the UK, with temperatures reaching 38.1°C. A year earlier, Britain baked for months in an unprecedented heatwave. Recent summers have surprised British scientists, but they may become the norm in the UK in decades to come.

Wales is perhaps best known for its deep green hills dotted with sheep – three-quarters of the land is kept as permanent pasture for livestock. But changes to the climate could radically alter the scene. Recent dry summers have caused Welsh river levels to reach exceptional lows. Data from monitoring stations showed the river Teifi at Llanfair at just 17cm on July 14 2018 and 19cm on July 28 2019 – some of the lowest figures in memory. The same was detected at the river Conwy at Cwmlanerch – 47cm on July 15 2018 and 60cm on July 10 2019.

Grassland needs time and moisture to recover, but as British summertime begins, 2020 is already on track to be the hottest year since records began. If the exceptional heat and drought of recent summers is to become routine, it’s unlikely Wales can continue to support its 10 million sheep.

How Wales could adapt

Warm weather at the right time is crucial for many of the crops grown in Wales, including barley, maize and oil seed rape. But high temperatures and water stress can stunt growth and cause crops to ripen prematurely. If drought conditions persist, fertilisers can’t be used as they need rain to wash into the soil. Meanwhile, livestock suffer in the heat and need extra care.

In recent summers, Welsh sheep farmers have reported problems rearing livestock thanks to extreme summer weather. This is particularly worrying as sheep and beef farming are among the lowest intensity sectors of Welsh agriculture, with natural pasture grazing providing most of the food these animals need.

Climate models predict that summer temperatures will be higher and rainfall more scarce throughout much of the UK. The dominant crop varieties British farmers use are likely to struggle under these conditions, and models suggest that crop yields could plummet.

One of the ironies of the climate emergency is that hot weather encourages greater use of resources – more shelter and storage room to protect livestock and crops, more fertiliser and more irrigation – all while delivering less produce. In less developed countries, global warming has already made agriculture more difficult if not impossible across large areas of land, leading to food shortages, conflict and mass migration. Recent summers show that Wales isn’t ready for even the minimum level of warming predicted this century.

An assessment by the UK Committee on Climate Change identified 56 risks to Wales, including livestock and wildlife dying from water scarcity. The Welsh government has committed to publishing plans for how Wales will adapt to climate change. But people at public consultations have highlighted a lack of urgency in government plans, noting that climate change is too often referred to as a future risk while the experiences of farmers show how urgent the threat is.

While the government should redouble efforts to reduce emissions, it should also try to turn the challenges of warming into opportunities. By managing the land better in Wales, farming can become more resilient to climate change and even store carbon, helping slow global heating.

Warmer and drier summers will suit a different selection of crops, but breeding drought-resistant varieties of traditional crops will help too. New species of drought-tolerant grasses could be introduced and traditional breeds could be swapped for those adapted to drier conditions.

The time is right to bring more trees into Welsh farmland. The grassland pasture that livestock are currently raised on could welcome more shrubs and trees, which would provide cooling shade and an extra source of fodder. They’d also help draw down more carbon down from the atmosphere.

Significant warming is now inevitable, even with considerable action this decade. That’s going to bring about huge changes all over the planet – even in the temperate regions we tend to think of as being relatively stable. It’s time to reckon with these harsh realities and begin preparing for a new world.