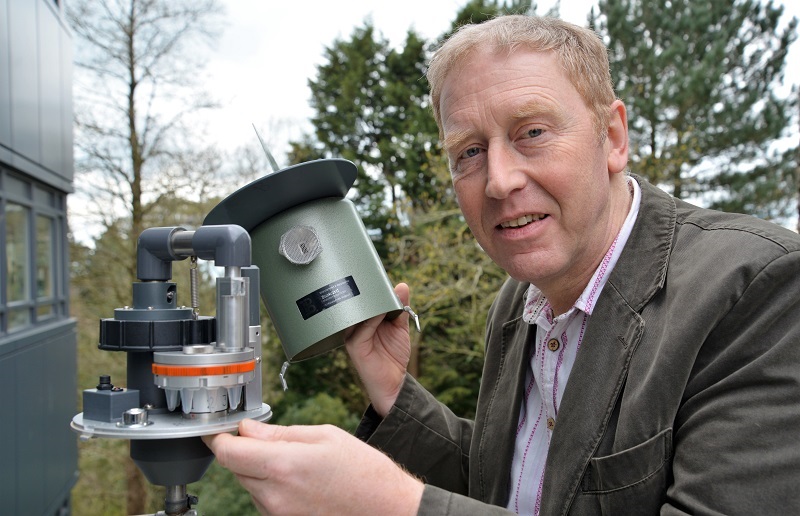 Dr Gareth Griffith, a member of the team that has revealed the potential link between pollen from certain grass species and respiratory health issues.

New research, which brings healthcare data and ground-breaking ecological techniques together, could set a roadmap for refining pollen forecasts in the future.

Current pollen forecasts, crucial for people with allergic asthma or hay fever to manage their symptoms, rely on measuring the total load of grass pollen in the atmosphere. However, these do not distinguish between pollen from different types of grass.

Now, a potential link between pollen from certain grass species and respiratory health issues has been revealed.

The results, published in Current Biology, have been produced by the first project to use an ecological biomonitoring method called eDNA (‘environmental DNA’) to explore the relationships between airborne pollen and human health.

The research involving Aberystwyth University, along with Bangor and Exeter Universities and others, is part of the larger PollerGEN (Natural Environment Research Council-funded) research project, which in 2019 established the use of eDNA techniques to identify different types of microscopic grass pollen grains.

The current work matched two years of records of public health data (asthma-related hospital admissions, and GP prescribing of respiratory and nasal allergy treatments) with the eDNA monitoring data for pollen from different grass species made at 14 locations throughout the UK.

At certain times of the year, between May and mid-August in temperate zones, grass is the most important hay fever and asthma-inducing outdoor airborne allergen.

Dr Gareth Griffith from the Institute of Biological, Environmental & Rural Sciences (IBERS) at Aberystwyth University, is one of the authors on the study.

Dr Griffith said: “From a biological perspective it is fascinating how different grass species released their pollen at different times of year and also different times of day. Equally, from a health perspective, to be able to better understand these processes and identify which grass pollen is most harmful to susceptible people would be a major advance.”

Prof Simon Creer, of Bangor University, added: “This is one first step and theoretical ’proof of concept’ of a vast research project, which could lead to more precise pollen forecast or forecasts for different allergen types.

“Worldwide, there are over 400 million people with allergic rhinitis and over 300 million with asthma. Treating allergic asthma costs the UK over £2 million a year in direct costs alone, so there are great potential savings to be made.”

Dr Francis Rowney, who led the health data portion of the work whilst based at the University of Exeter, commented: “Though this is certainly early days, it was fascinating to find that particular grass species may have greater impacts on respiratory health than others.

The paper Environmental DNA reveals links between abundance and composition of airborne grass pollen and respiratory health is published in Current Biology.