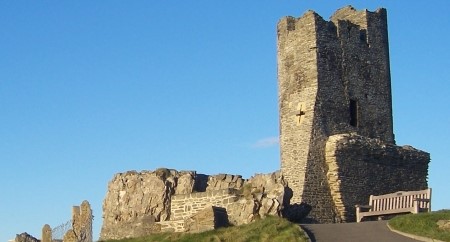 Our team of researchers work on the ongoing revision of a dictionary of Anglo-Norman – the French language as it was used in the British Isles during the medieval period (1066-1500).

During that period, Anglo-Norman also had a huge influence on English vocabulary, and as such the findings of the AND team have direct relevance for the study of the history of English language: It has been estimated that as much as 50% of the word stock of Modern English is derived from Anglo-Norman, including every-day words such as ‘beef’, ‘flower ‘boil’, ‘noon’, ‘present’ or ‘rock’.

The AND is a freely accessible on-line resource. One of the texts analysed for the creation of the dictionary is a 1320 survey of Aberystwyth Castle – the ruins of which remain one of the main features of present-day Aberystwyth.